The fine line between empowerment and entitlement | Callahan’s Corner 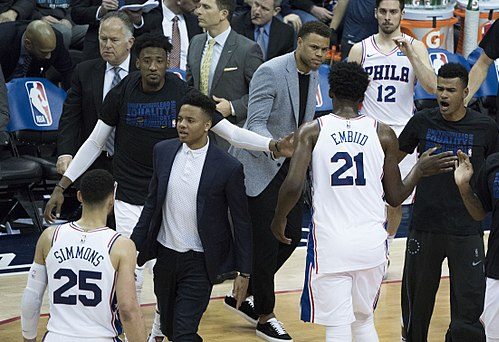 Heartbreakingly, the boomers were right. Young people are entitled.

Rather than say millennials, a frequent target of old people’s ire, I say young people because it is now official that millennials and Gen Z equally express an undeserved desire for things. Boomers have always known this. Now, the NBA knows it, too.

Ben Simmons, the highly-talented and even more polarizing point guard for the Philadelphia 76ers, is not happy. After clocking in one of the worst individual performances in recent memory during the Sixers’ second round upset to the Atlanta Hawks in last season’s playoffs, Simmons, 25, demanded out. He didn’t report to training camp, and only started showing up to practice last week to collect a check. In his second practice, however, he was promptly kicked out for being a distraction.

His reason for wanting out? Apparently, everyone else, from head coach Doc Rivers, to superstar teammate Joel Embiid, to the raucous but supportive Philly fans, caused his struggles. It was most certainly not due to the fact that Simmons has not improved one iota since entering the league five years ago. Mind you, he wants out of town just one year after his five-year maximum contract extension kicked in. So much for honor.

As an unfortunate and unwavering Philadelphia sports fan, I am outraged. Upset. Disappointed. Disgusted. Yet another one of our supposed saviors has fallen from grace, through the Earth’s crust and straight into the mighty depths of Hell.

As an NBA fan, I recognize that Simmons’ tantrum is not only enormously detrimental to the league and the sanctity of its contracts, but underscores a larger problem the NBA has been facing with increasing intensity for several years now.

Seemingly every year, a new star forces his way off of his current team. In 2020, it was James Harden hightailing his way out of Houston. In 2019, Anthony Davis fell out of love with basketball while he was on the New Orleans Pelicans. Jimmy Butler infamously humiliated the entire Minnesota Timberwolves organization en route to a trade to Philadelphia in 2018. Now, in 2021, Simmons takes the mantle as the NBA’s disgruntled star.

The NBA is surely a player’s league, and that’s a good thing. Players should be free to voice their displeasures and seek greener pastures in pursuit of a championship. But there’s a point at which empowerment becomes entitlement.

Harden, Davis and Butler each only had one year remaining on the contracts they signed with the teams from which they were being traded. Simmons, however, has four years left, and rumors abound that 21-year-old Zion Williamson — the first overall pick of the Pelicans just three years ago — may leave the Big Easy before his rookie contract even expires. This is uncomfortable and damaging territory for the NBA.

So, what to do about the superstar exodus? Ranting about it, like I have until now, will only get us so far. Several years ago, I wrote about a similar situation happening in the NFL and argued that we should direct blame to football’s higher ups — namely, team owners — for fostering a league in which contract holdouts are common. We should do the same here.

NBA commissioner Adam Silver, as well as team governors and other executives, need to stand firm against ridiculous disputes, like the Sixers are against Simmons. The provision of fines for missing practices, games and exhibitions should be relentless and levied at every deserving instance. Suspensions must always be on the table as well.

It is almost always wholly unacceptable to cry foul when there is none and not report to the team when the going gets tough. No one said being a professional athlete was easy, and that goes for what happens on and off the court, during team practices and meetings. The NBA needs to nip the Simmons situation in the bud, lest even more stars play hookey before they can rent a car without paying a “young renter fee.”

Ben Simmons and Joel Embiid high five teammates going to the bench. Simmons is hoping to get traded away from the 76ers even though the season already tipped off. (Wikimedia Commons/Keith Allison)