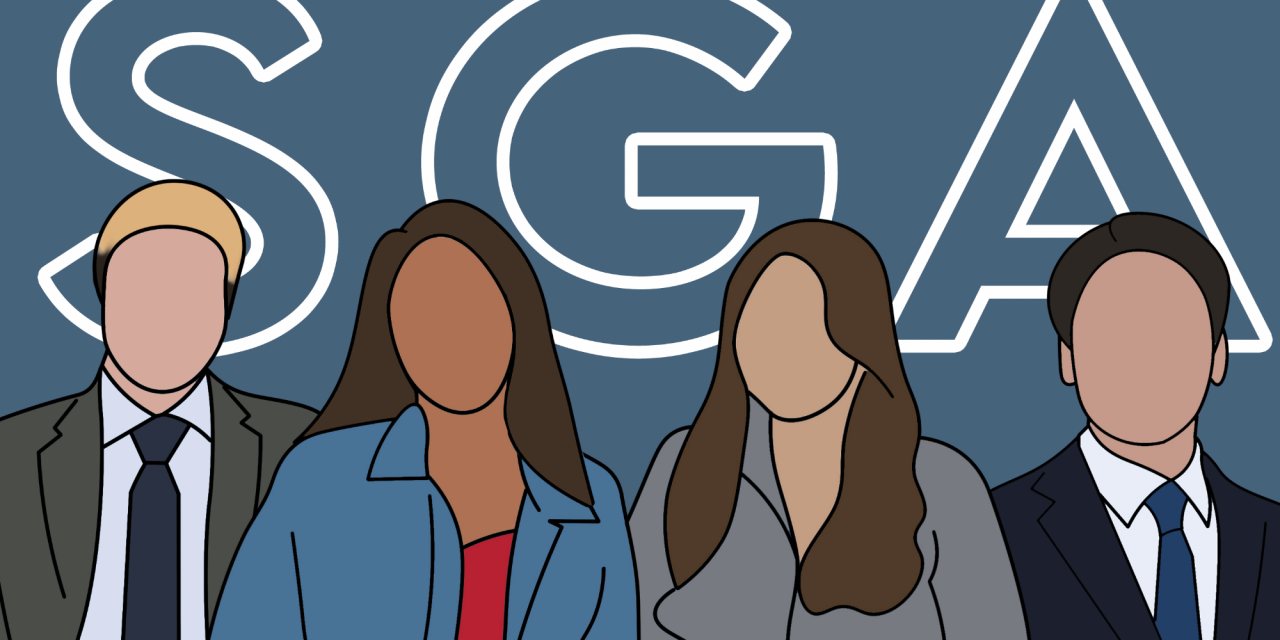 Emory University’s Student Government Association (SGA) voted to instate a sustainability vice president and committee during their Sept. 12 meeting after students expressed concern about SGA’s “lack of focus” on sustainability initiatives, according to Bill 56sl18.

Catherine Wang (24C) was named SGA’s first vice president of sustainability. They are an environmental science major and have been a member of the Emory Climate Reality Project since they were a first-year student. They also helped design and were a teaching assistant for the interdisciplinary studies course “revolution in the anthropocene,” which discussed science fiction, environmental justice and economics.

“Climate change and environmental justice is one of the biggest problems our generation faces,” Wang said.

Wang added that they are excited for the opportunity to be the first to hold the position.

“I’m really glad that the SGA recognizes this as a need,” Wang said. “There is a lot of interest in the population and there’s a need for Emory to do better at sustainability, so I hope to be a liaison between the different campus organizations, offices, professors and students who want to make this campus more sustainable.”

Although they noted they are still early into their role, Wang said their goals include increasing student engagement with sustainability and communicating with offices on campus promoting sustainability. They also hope to work with Plastic Free Emory and the Office of Sustainability Initiatives (OSI) to reduce single-use plastic on campus, such as during the Emory Farmers Market.

Explaining that the sustainability committee will be dedicated to advocating to University administration about student concerns and policy changes, SGA President Noah Marchuck (24C) told the Wheel that sustainability is one of his main goals for the year.

“Part of it will be hopefully working with Emory admin to properly adjust to their climate action plan, as well as communicating what certain needs on campus are coming up and what concerns they should be aware of,” Marchuck said. “The committee will be following through on those initiatives and helping gather that research.”

Marchuck also hopes to pursue election reform following last year’s SGA presidential election, which was marred by controversy surrounding the clarity of SGA’s code of election documents and how to handle a “no confidence” win.

Marchuck recently established an electoral reform commission, which is dedicated to editing the election documents. Although Marchuck said he could not discuss specific changes that are being made, he noted that the revisions will likely be completed by November so the legislature can vote to implement the updated governing documents before SGA’s spring elections. 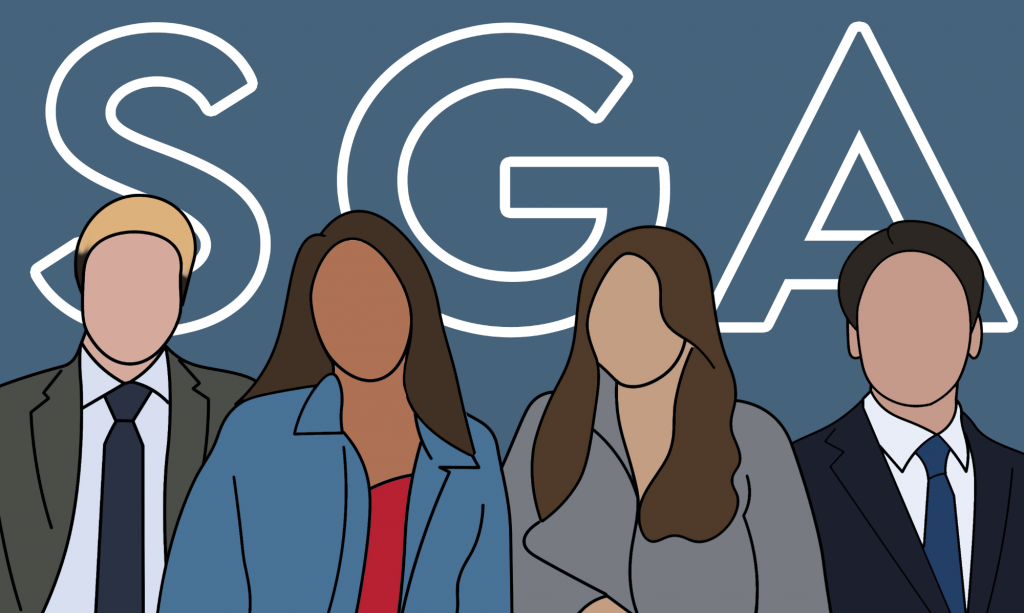 Speaker of the Legislature Alyssa Stegall (21Ox, 23C) described SGA as a puzzle made up of individual pieces of the University, such as different student organizations and administration. She explained that SGA is the culmination of these pieces and acts to represent students and Emory as a whole.

“Taking all of those puzzle pieces and putting it together to be able to actually do something concrete with student concerns is the best way that I could put it,” Stegall said.

SGA is made up of representatives from the four divisional councils, which each serve one of Emory’s undergraduate schools — College Council (CC), which represents the Emory College of Arts and Sciences, the Emory Student Nursing Association (ESNA), the Bachelor of Business Administration Council (BBA) and Oxford SGA. Representatives from each divisional council — called legislators — express concerns about their school to SGA.

SGA has 16 legislators: eight from CC, three from Oxford, three from BBA and two from ESNA.

“If there’s a consistency among the other divisional councils about the same types of concerns, that’s when we address it,” Stegall said. “So our things are very much university-wide instead of specifically to one campus or one divisional Council.”

Once SGA decides to take on an issue, they cannot simply vote to make an Emory-wide change, which Marchuck said is a common misconception. In reality, SGA’s job is to gather research about the issue through means such as student surveys, data analysis and student experiences, which they then present to the administration to advocate for change.

“When it comes to looking for more systemic changes, or more policy changes, we can’t control that,” Marchuck said. “We bring that to people who are higher up and have the power to make those changes.”

Marchuck noted that this process can take upwards of several years before a permanent change is made. For example, when multiple students complained to SGA about the lack of  menstrual products in bathrooms, they spent four years working with the administration on the Free Menstrual Products Initiative, which launched in fall 2021.

“A lot of people are just like, ‘Oh, you’ve heard the idea now, why hasn’t it changed in a couple of months or a couple of weeks?’” Stegall said. “It’s because you have to do the research and admin like to know numbers.”

When SGA advocates for a change on campus, legislators will vote to pass a resolution. Although a resolution does not make any immediate changes, Stegall explained that it catches the attention of administration.

“Especially if it has unanimous consent, it shows admin … ‘Hey, this is like a very, very pertinent student concern at the moment,’” Stegall said. “This should be put at the top of your priority list.”

Though SGA cannot pass a bill for most issues, SGA does have the power to make direct changes to student finances through the student activities fee, which is under their control. Each student pays $117 per semester, which SGA divides between the four divisional councils. The councils then use the money to fund clubs. SGA also funds six executive agencies, which include the student programming council, media council, Outdoor Emory, club sports, Emory Entrepreneurship and Venture Management and TableTalk.

To make changes to legislation — such as changing the cost of the student activities fee — SGA has to pass a bill. For example, in August 2020, SGA voted to pass a bill to cut the student activities fee by 25% amid a wave of canceled events during COVID-19. Stegall added that SGA later voted to cut the fee completely the following spring. Bills are also used to edit governing documents.

“A bill is something that creates concrete change,” Stegall said.

Resolutions and bills are voted on by 15 legislators. An additional legislator, the Speaker, only votes if another legislator is absent and a tiebreaker is needed.

Legislators make up the legislative branch, which Stegall manages. If she is not able to fulfill her role because of situations like medical leave, Khegan Meyers (24B) would take over because he is the ranking member.

Like the U.S. government, SGA also has an executive branch, which Marchuck leads. His main role is managing behind-the-scenes aspects of SGA that are not in the legislature, such as finances, governing documents and programming. He also acts as the main connection to University administration.

The executive branch includes the chiefs of staff, who oversee the branch and communicate with Marchuck to help the executive cabinet carry out initiatives and connect with administration.

Other members of the executive branch include the secretary, who is in charge of keeping track of attendance and records in addition to serving on the Board of Elections, the attorney generals, who oversee the governing documents, various vice presidents across disciplines such as finance, diversity, equity, inclusion and belonging (DEI), technology management and communications, a Residence Hall Association liaison and a Student Alumni Board liaison.

The Elections Board chair and vice chair also reside in the executive branch. The Board of Elections is a neutral party that oversees all SGA elections.

The last branch of SGA is the judicial branch, which is made up of the Constitutional Council. The Council hears and decides any cases regarding the constitutionality of SGA or any undergraduate student group and is headed by a chief justice, who presides over six associate justices.

Marchuck added that applications for the first-year council will open at the end of the month. The council meets weekly with a member of SGA to discuss their role and how to get involved further. First-year students on the council also get to carry out their own initiatives.

“It’s the best way to get involved in student government because you also learn about the inner workings of it while finding your own footing and seeing what it is that you’re interested in,” Marchuck said.