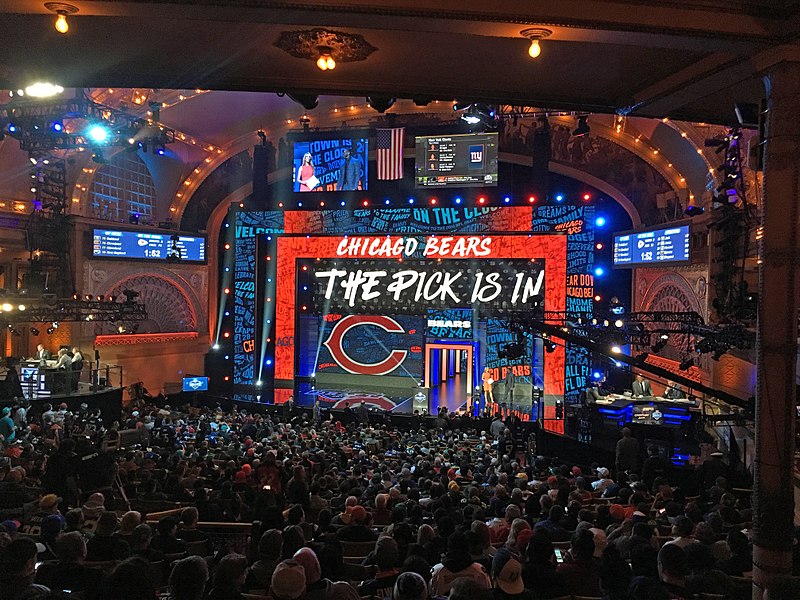 It’s crazy to realize how it’s almost been a full year since the NFL held its first ever virtual draft. With the rest of the world slowly returning to some kind of normalcy, the 2021 NFL Draft will follow suit. The draft will be held in-person in Cleveland from April 29 through May 1.

The pandemic has affected each school and conference differently. Some teams had shortened seasons, others played less non-conference games than normal and some didn’t even have a 2020 football season. Despite all of this, the 2021 draft class still carries a star-studded cast. Here’s what I predict the first few teams will do with their selections.

This might just be the most obvious first overall pick in recent memory. Trevor Lawrence has been the quarterback “wonderboy” for years now. The 6-foot-6-inch, 220-pound quarterback was a five-star recruit coming out of high school, and at Clemson, Lawrence didn’t disappoint. Lawrence led the Tigers to a championship title in 2019 and finished his collegiate career with a record of 34-2. Analysts compare Lawrence to all-time great prospects like Peyton Manning, Andrew Luck and John Elway. After Jaguars fans bought Lawrence wedding gifts, the real question in this draft is how the Jaguars will build around Lawrence to set him up for success. There aren’t too many picks that I’d be willing to say are a lock, but this is a lock. If it isn’t, someone should be fired.

After the Jets traded quarterback Sam Darnold to the Carolina Panthers early this month, Jets general manager Joe Douglas essentially confirmed that his team would draft a quarterback. The question now is: which one? Since the end of the college season, there has been a growing call from experts that the mantle belongs to Zach Wilson. Wilson had a breakout season in 2020, earning a record of 11-1 and throwing for 3,692 yards and 33 touchdowns. He also had a completion percentage of 73.5% and only threw three interceptions. One knock on Wilson is that these numbers came against weaker competition, and questions remain if he can perform at the NFL level. Statistics and strength of schedule don’t tell the whole story with Wilson, though. The tape reveals one of the best college arm talents in recent history, drawing comparisons to Patrick Mahomes of the Kansas City Chiefs and Aaron Rodgers of the Green Bay Packers. Wilson’s arm talent undoubtedly sets him apart in this draft class. Some notable analysts even prefer him over Lawrence. While I don’t think the Jaguars will agree, the Jets should be happy to have a player of Wilson’s caliber available at the second pick.

The 49ers traded up with the Miami Dolphins in late March, giving up this year’s No. 12 pick and third-round selection, as well as two future first-round picks in exchange for third overall in this year’s draft. Logic dictates that a team would only make such a trade if they believed they could draft a quarterback capable of leading their franchise for years to come. There has been a lot of talk that the 49ers traded up for University of Alabama quarterback Mac Jones, but I just can’t understand why they would pass up on Ohio State University quarterback Justin Fields. For their sake, I hope they don’t. Fields was widely regarded as the second-best quarterback in this class until the hype around Wilson started growing. Fields is phenomenal in the pocket and also doubles as a rushing threat, having run a speedy 4.44 second 40-yard dash at his pro day. Fields is a warrior, and his grit was on full display after taking an incredibly hard hit against Clemson in this year’s College Football Playoff semifinal game. Clearly in pain, Fields played on and threw four more touchdowns in one of the best games of his college career. Fields has everything it takes to be a great passer, and he’s proven it against great competition.

With three quarterbacks likely going with the top three picks, the Falcons might be the first team to draft another position. Barring one of the top three quarterbacks falling or the Falcons trading down, I don’t expect them to take a quarterback in the first round. The Falcons are already loaded with offensive weapons for quarterback Matt Ryan in the forms of wide receivers Julio Jones and Calvin Ridley. They should focus on improving their offensive line, which allowed 2.6 sacks per game last season — 11th worst in the NFL. Luckily for the Falcons, they can take one of the best offensive line prospects of all time with offensive tackle Penei Sewell from the University of Oregon. Sewell opted out of the 2020 season to prepare for the NFL, having already proved everything there is to prove as an offensive tackle in college football. In 2019, he was an All-American and won the Outland Trophy as the top interior lineman in the country. Standing at 6 foot-6 inches and weighing 330 pounds, Sewell is a monstrous athletic force to be reckoned with. If the Falcons invest in Sewell, they are looking at a franchise tackle for years to come.

If quarterbacks do end up being the first four draft choices, that trend will most certainly come to an end with the Bengals’ pick. Quarterback Joe Burrow was taken first overall by the Bengals in last year’s draft, and the team must now do whatever it takes to help him succeed. That help may come in the form of an offensive lineman, but with Sewell likely off the board, the Bengals also have the ability to take the best wide receiver prospect in this draft class and Burrow’s former college teammate: Ja’Marr Chase. This prediction might be more controversial considering University of Alabama wide receiver prospect Devonta Smith won the Heisman Trophy last season. However, Chase is still the better option. As a sophomore in 2019, Chase led college football with 1,780 receiving yards and 20 touchdowns. He outperformed teammate Justin Jefferson, who was later drafted in the first round by the Minnesota Vikings and just had one of the best rookie wide receiver seasons of all time. Chase opted out of the 2020 season, but he has already proven himself. At his pro day, Chase showed NFL scouts that he’s in better shape than ever, clocking in a 4.34-second 40-yard dash and running the fastest short shuttle for a wide receiver since Amari Cooper in 2015. Reports are that Burrow wants a reunion with Chase, and if the Bengals want an explosive offense, they’ll listen.

The Chicago Bears prepare to make a selection in the 2016 NFL Draft. Teams like the Bears are preparing to make their selections for the 2021 NFL Draft. (Wikimedia Commons/swimfinfan)