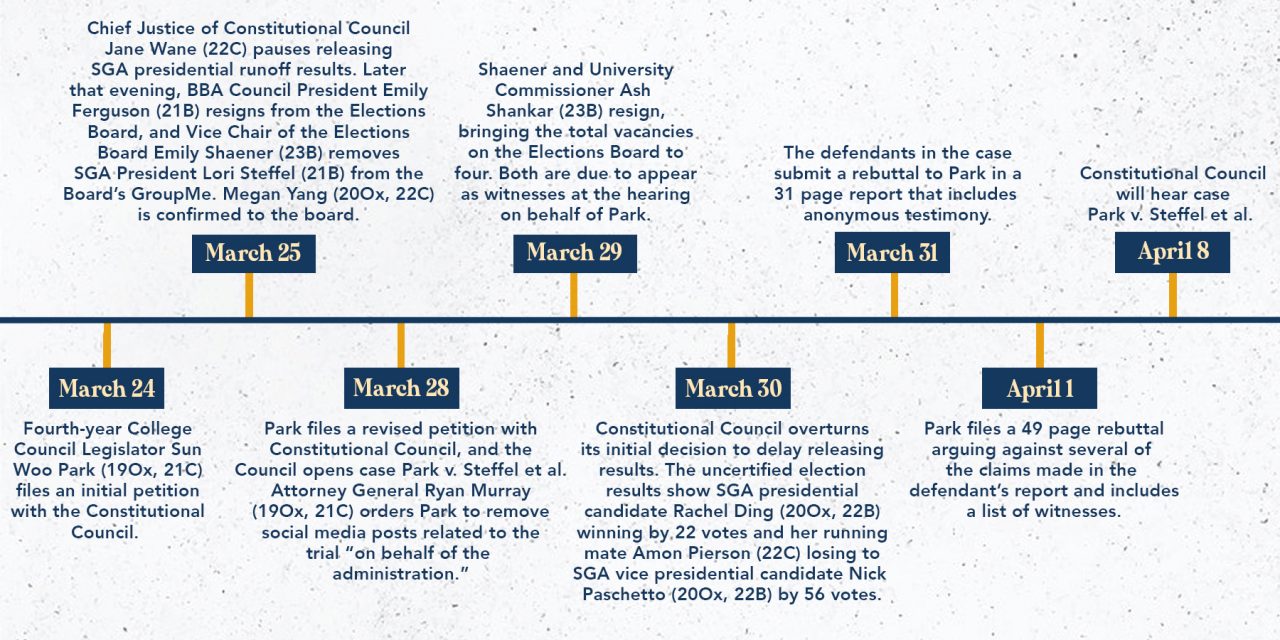 The Wheel has broken down the allegations made by Park and the events that took place since the petition was filed. 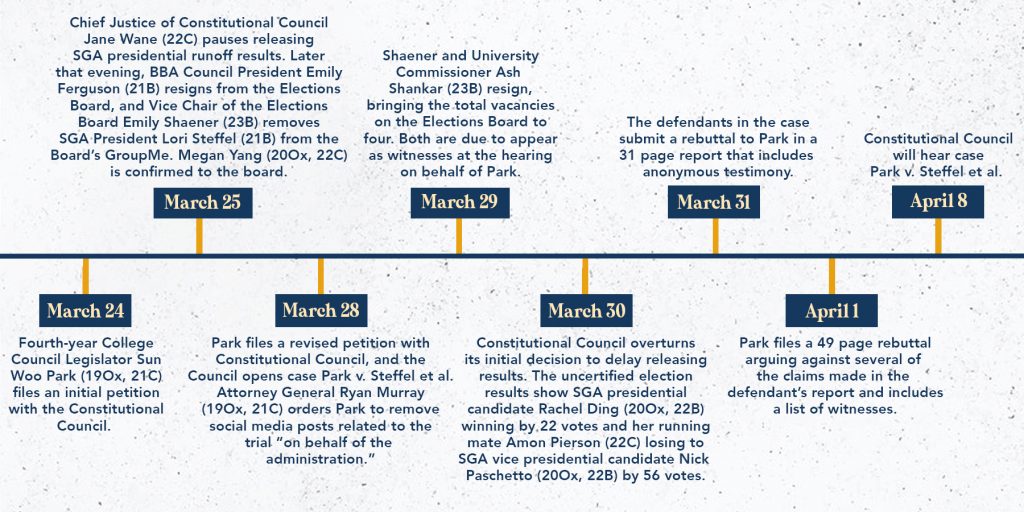 A timeline of the SGA allegations which will be addressed during a hearing on April 8. (Ally Hom)

In statements to the Wheel, Steffel and Ferguson refuted Park’s allegations, denying that they were members of the Board and claiming they never signed a waiver of neutrality.

“Because I was never on the Elections Board, I never was asked or required to sign an Elections Board waiver saying I would not support a candidate for SGA,” Steffel wrote.

Steffel added that she was active in an Elections Board GroupMe chat only during the certification of the fall 2020 elections in order to fill a quorum.

Ferguson also stated she was never a member of the Board and never signed a waiver. Both Steffel and Ferguson reiterated that they did not sign waivers and were not “confirmed as Election Board member[s]” in an initial defense submitted as part of pre-trial procedures.

SGA Secretary and Elections Board member Megan Yang (19Ox, 22C) told the Wheel in a March 31 email that while Steffel and Ferguson were listed as members of the Board, they had not undergone “formal confirmations.” Yang said she believed that Steffel and Ferguson had “simply assumed those roles because they were heads of their respective divisional councils.”

Park additionally claimed in his petition that Lee violated Article 3, Section 4 of the Code of Elections when she campaigned for Kumar and Paschetto on an Alpha Kappa Psi (AKPsi) business fraternity group chat while also running for BBA Council vice president. Part IV, Article 3, Section 4 of the Code of Elections prohibits party candidacy and bans candidates other than those running on a joint ticket from promoting candidates “through any means other than face-to-face verbal communication.”

Additionally, Park stated that Lee, who is also the president of AKPsi, engaged in “mass voter intimidation” by pressuring members of the business fraternity into voting for Kumar and Paschetto and requiring the pledge class to send her pictures proving they voted.

In the initial defense, Lee refuted allegations that she engaged in voter intimidation, saying that she did not require any member to “show receipts of who they voted for.” Lee’s defense also included anonymous testimony of AKPsi members who said they did not feel coerced into voting for a particular campaign.

In a rebuttal to the initial defense, Park refuted these claims with anonymous testimonies from different AKPsi members who claimed they felt pressured to vote because of the “power dynamic” created by Lee’s messages.

The initial defense also states that Lee’s campaigning “represent merely an unintentional and honest mistake that occurred on one occasion, and likely occurred as a result of an inadaptation of the Code of Elections amidst a virtual campaign cycle,” since permissible face-to-face promotion of candidates was not possible.

Park believed that the Kumar-Paschetto campaign breached the privacy of hundreds of students by acquiring the phone numbers from group chats and organizations such as Emory Entrepreneurship & Venture Management, Kappa Alpha Theta and Delta Phi Epsilon. Park claims the campaign sent those students texts via unidentified numbers asking them to vote for the Kumar-Paschetto ticket.

The Wheel confirmed that the campaign texted phone numbers of first-years living in Raoul Hall asking them to vote for Kumar and Paschetto. When the Wheel called these phone numbers back, they received an automated voice message that the numbers were no longer in service.

The Code of Elections does not address student privacy. However, following student complaints, the Board of Elections ordered the Kumar-Paschetto and Ding-Pierson campaigns in an email to cease text message campaigning.

Park alleged that the Kumar-Paschetto campaign ignored Board instructions and continued to send text messages to students.

Kumar and Paschetto stated they had only sent personal messages to students and that this form of campaigning was approved by Shaener. They also argued that it is an “unachievable standard” to expect candidates to monitor the campaigning supporters do on their behalf. The two did not, however, directly acknowledge Park’s claims that they used texting bots.

Park’s revised petition also claimed that Ducemus, a secret society founded in 1991, worked with the Kumar-Paschetto campaign and other SGA members to sway this year’s elections. Park alleged that Paschetto is a member of Ducemus and that the organization hoped to have Paschetto elected to continue to hold sway over the executive branch. The Wheel was unable to independently verify Park’s claims.

The Wheel was unable to independently confirm the current existence of Ducemus or its members. However, Ducemus has a plaque next to the McDonough Field stage commemorating their founding, and the Wheel previously published an anonymous editorial by the group in 2015. The Emory Alumni Association claims the group is responsible for running Wonderful Wednesdays.

The initial defense did not address Park’s claims about Ducemus.