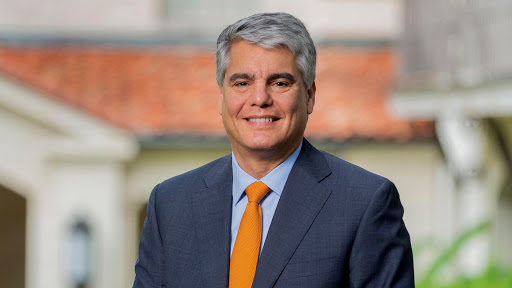 University President Greg Fenves emailed students on Aug. 13 with an outline of plans to address renewed demands from the Coalition of Black Organizations and Clubs./Photo Courtesy of UT Austin

Though Fenves did not provide detail regarding the University’s specific response to a worst-case scenario, he stated there is not a certain threshold of COVID-19 cases that would prompt an evacuation or significant changes to the safety guidelines established in July.

“There are so many different variables that would be involved in that decision,” Fenves said, noting that he’s met twice with University leaders to postulate scenarios and model institutional responses. “We’re not going to have a single criterion … that’s typical in planning for how to deal with crises.”

Amid a nationwide racial reckoning and renewed demands from the Coalition of Black Organizations and Clubs (CBOC), Fenves emailed students on Aug. 13 with an outline of plans to address these issues. Specific changes included an evaluation of buildings named after slave owners and renovations of affinity spaces.

“It is crucial that university leadership not simply put the burden of responsibility on you — including or especially those from Black, Latinx, Asian, Native and Indigenous communities,” Fenves wrote.

Fenves also told the Wheel he does not plan to defund the Emory Police Department, the third demand listed in CBOC’s statement to the administration.

“I don’t anticipate defunding and replacing [EPD] because safety is important, and it’s a question of how we define that,” he said. “How do we have it so all members of the community feel safe and have trust in officers that we hold responsible for providing safety?”

Fenves wrote the University is working with Justice and Sustainability Associates (JSA), a Washington, D.C.-based firm to hold discussions with community members regarding policies in the EPD. JSA preliminarily recommendations included a review of EPD’s use-of-force policies and increased public meetings with the Community Engagement Council. A full review of the firm’s findings is expected later in the semester.

The University will implement its responses to CBOC’s demands over a staggered timeline starting as early as the beginning of the semester, Fenves told the Wheel.

The University has implemented several cost-saving measures to cope with these losses, including a four-month 5% salary reduction for faculty and staff making $75,000 or more a year and a temporary suspension of capital projects. Fenves did not specify what future measures may entail, noting that future student enrollment will dictate future cuts.

He also plans to increase involvement with undergraduates and encourages students to engage with him on social media. Transferring from a Division I public university to a Division III private university will not affect his leadership style, he said, though issues like transparency will look “very different” at Emory.

“I meet with students whether there are 7,500 undergraduates or 40,000 undergraduates,” he said. “The students are still there for the same purpose, have similar goals and questions. I just don’t see that there’s that much difference.”

In the last year of his five-year tenure at UT Austin, Fenves and the university drew backlash from students over inadequate responses to faculty sexual misconduct allegations. Although students protested for a town hall with him in the fall, Fenves did not hold one until early 2020.

Fenves accredited the delay to a lack of information and stated the town hall was one among many responses to student demands. Fenves’ administration created a working group to reexamine sexual misconduct policies at UT Austin and hired an outside law firm to provide recommendations.

While Fenves acknowledged nationwide calls to restructure or eliminate Greek Life organizations, he stated he is “too new” to comment on Emory Greek Life. Numerous Emory fraternities and sororities have faced allegations of sexual misconduct and racism on various social media accounts. Fenves noted he was in a fraternity as an undergraduate at Cornell University (N.Y.).

“[Greek Life] can be an important part of student life … but now that we know that there have been significant problems related to sexual assault, alcohol use, hazing, incident violations and incidents of racism,” he said. “I’m very concerned about those, and those need to be addressed.”

Correction (8/14/2020 at 9:45): A previous version of this article stated that Emory was projected to have incurred an $84 million loss ending this fiscal year. In fact, this projection is for the fiscal year ending August 2021.