Fall 2020 will be an eerily quiet time at Emory. Not only will there be a lack of students, but no Emory athlete will compete during the semester. In a statement released on July 17, the University announced there will be “no competition for Division III Athletics” until at least January.

The decision directly affects fall sports like volleyball, men’s soccer and women’s soccer, which will lose out on a whole season. Winter sports, too, will have to cope with the decision as their seasons begin toward the end of the semester; the University plans to readdress their capacity to play sports in January. Practices for all teams will also be restricted and athletes were instructed not to return to campus for athletic purposes.

Following the COVID-19 pandemic forced the cancellation of spring sports in March, hope remained that fall sports would be unaffected. On June 11, Emory Athletics released a promising statement detailing the creation of a working committee to discuss the continuation of intercollegiate competition in the fall.

“The cancellation of fall sports was always a possibility,” Berman said. “So this decision doesn’t come as much of a surprise.”

While most student athletes can look forward to future seasons, many seniors must face the heartbreak of saying goodbye to the sports they’ve played their whole lives. Men’s soccer senior co-captain Max Mehlman understood the decision but the pain was no less easier to bear.

“We are all obviously disappointed by the cancellation of our fall season,” Mehlman said. “I fully understand and support the decision that was made, but going into my senior year and not being able to join my teammates on the field absolutely breaks my heart.” 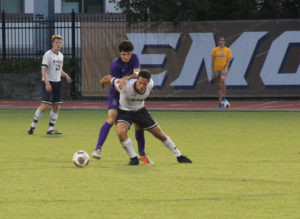 Berman echoed Mehlman’s sentiments, acknowledging that he and his fellow seniors may have unknowingly stepped on the field as Emory Eagles for the last time. But there’s also the opportunity to make up this season for athletes who won’t get to compete. In March, the NCAA announced that any Division III athlete who lost 50 percent of their scheduled games due to the pandemic would be granted an extra year of eligibility. This has given Berman and other seniors hope that their soccer careers may not be entirely over, he said.

“I know a lot of the seniors are contemplating taking a fifth year,” Mehlman said. “But it is still crazy to think that our last competitive soccer experience could be behind us.”

Despite their season vanishing in a matter of moments, the two were conscious of the safety implications presented by this decision. In a time when the future remains uncertain and turbulent, the cancellation of fall sports was deemed necessary to protect the community.

“As much as we are frustrated by the decision, we all know it’s in the best interest of our own health, as well as the health of the entire Emory community, which is of extreme importance,” Berman said.