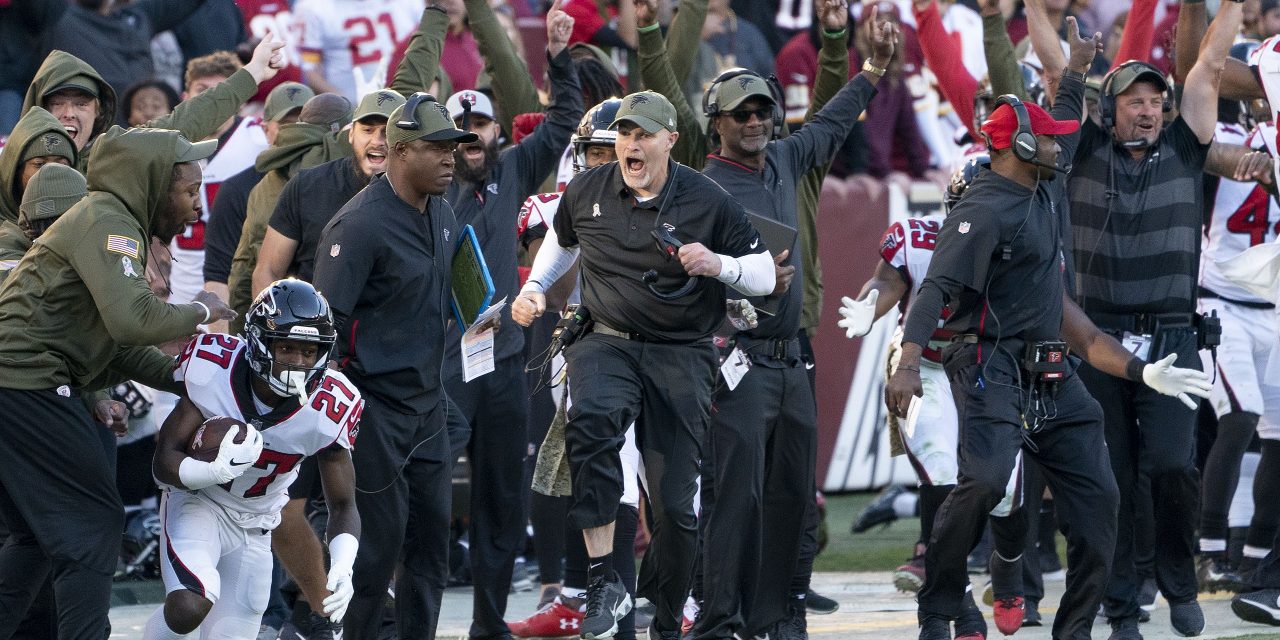 Between the end of the regular season and the start of free agency, there is not much for eliminated teams to do other than watch the playoffs and prepare for the upcoming offseason. But in the past week alone, three teams made changes to their head coaching positions, ushering in a new era for their respective franchises.

Atlanta is no stranger to choking, but after blowing multiple fourth-quarter leads on their way to an 0-5 start, the Falcons fired head coach Dan Quinn. Quinn spent six years with the team and led them to the Super Bowl in 2016, and to replace him, the team looked internally and named Raheem Morris, their defensive coordinator at the time, interim head coach.

Atlanta won four of their last 11 games with Morris at the helm, finishing the season 4-12. Despite some admirable performances from the Falcons under Morris — notably when they held the high-octane Kansas City Chiefs offense to just 17 points in a close loss — the Falcons were similarly flawed under Morris, as they blew a 17-point, fourth-quarter lead in Week 15 against the Tampa Bay Buccaneers. After managing to lose four games this season in which they held a 95% or greater win probability at some point, the Falcons looked to bring in some new blood.

On Jan. 16, the Falcons officially hired former Tennessee Titans offensive coordinator Arthur Smith to be their head coach. Smith, a former offensive lineman at the University of North Carolina, was first hired by the Titans in 2011 as a quality control coach. Over the years, he worked his way through the organization and became their offensive coordinator in 2019.

In 2018, the Titans’ offense was nothing special, finishing 25th in total yards and 27th in scoring. But after Smith took over the following season, the team improved drastically. After being traded to the Titans from the Miami Dolphins for only a fourth-round pick and a swap of late round draft picks, quarterback Ryan Tannehill put up the best numbers of his career and was named Associated Press NFL Comeback Player of the Year. Running back Derrick Henry led the league with 1,540 rushing yards, and the Titans qualified for the AFC Championship after upsetting the New England Patriots and Baltimore Ravens in the previous two rounds. In 2020, the Titans’ offense improved further, with the team finishing the season third in the league in total yards and fourth in scoring.

After Smith was hired in Atlanta, former players came out singing his praises. Smith has proven he has what it takes to make an NFL offense work and, perhaps most importantly for Atlanta, develop quarterbacks. With Falcons fans feeling optimistic, Atlantans hope to finally put their days of blowing leads behind them. 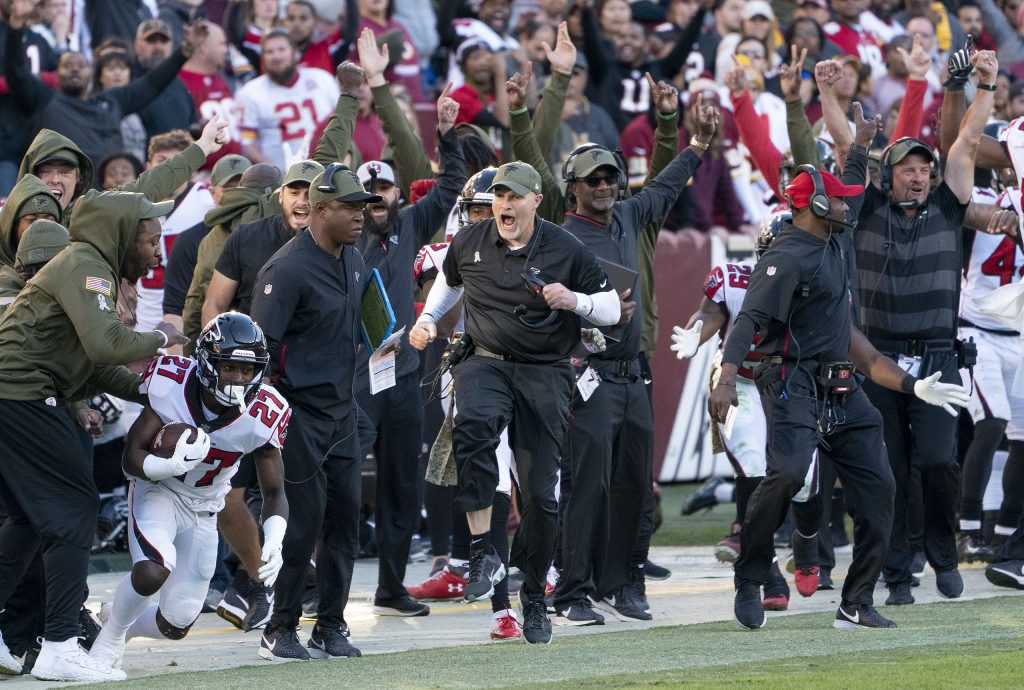 After quarterback Sam Darnold’s rookie season in 2018, the Jets sought a new head coach who could help Darnold take “the next step,” someone who was, “coaching to where the football is going,” as team CEO Christopher Johnson said in a 2019 press conference. Their forward-thinking hire was former Miami Dolphins head coach Adam Gase. While recommended by Peyton Manning, Jets’ fans were not as thrilled about the hire. After going 9-23 as the Jets head coach, with a point differential of -297 and an admission that he had failed Darnold, the Jets parted ways with Gase immediately after the 2020-21 season ended.

This time, the Jets were first and foremost looking for a leader who, in the words of Jets general manager Joe Douglas, could “garner the respect of every member of this team.” On Jan. 14, the team principally hired Robert Saleh, the first Muslim head coach in the NFL.

Despite playing tight end for Michigan State University, Saleh graduated with a finance degree and became a credit analyst, though he was not in this position for long. On Sept. 11, 2001, his brother barely escaped the second World Trade Center tower before it collapsed. While his brother survived, the event was enough to make Saleh re-evaluate his career, and he decided to leave his job to pursue his dream of coaching. Saleh worked his way up the NFL coaching ladder, and in 2017, 16 years after his first gig as a defensive assistant with his alma mater, he was named to his highest coaching position yet — defensive coordinator of the San Francisco 49ers.

“The breakout star of #LARvsSF was @49ers DC Robert Saleh. He’s intense on and off the sidelines, and his story is great. Just over a decade ago, he was an analyst at Comerica Bank. He left a high paying job to be an entry-level asst. NFL coach. He followed his dream.” –@PSchrags pic.twitter.com/hRUrP9EWun

After two years in the Bay Area, Saleh found himself leading a 2019 Super Bowl-bound defense that finished second-best in total yards allowed, first in passing yards allowed and sixth in takeaways. The 49ers’ 2020 season, though, was plagued by injuries, especially on defense. By the time their second game ended, the defense had lost defensive ends Nick Bosa, Solomon Thomas and Dee Ford for extended periods. Despite the injuries, Saleh still managed to turn the unit into a powerful defense, allowing the fifth-fewest yards in the NFL this season.

Now as a Jet, Saleh has some big decisions to make this offseason, chief among them whether or not he would rather coach and try to rekindle Darnold’s rookie season spark or draft another quarterback with the second overall pick. Despite the long road ahead, Saleh is exactly the type of person the Jets seemed to be looking for this offseason. To quote 49ers cornerback Richard Sherman, “He’s able to rally men. He’s a leader of men.”

“He’s able to rally men, he’s a leader of men”pic.twitter.com/LXcqfQwhWT

The Jaguars finished the 2020-21 season with just a single win, leaving them 1-15. The disappointing record, however, nets them the coveted first overall pick in this year’s draft. The Jaguars are expected to select fabled Clemson University (S.C.) quarterback Trevor Lawrence. If the Jaguars want Lawrence to succeed, they will need to build a better team around him, and they certainly have their work cut out for them. Luckily for Jacksonville, they are projected to have the most cap space of any team next year to go along with the most draft capital in the 2021 NFL draft.

After a little more than four seasons as head coach and a 23-43 record, Doug Marrone was fired by the Jaguars on Jan. 4. Marrone’s tenure with the Jaguars did have its moments, notably in 2017 after an improbable playoff push found Jacksonville in the AFC Championship. But, after this 1-15 season, Jaguars owner Shad Khan realized that his team needed a fresh start, and with ample cap and draft flexibility, the Jaguars found themselves as one of the most attractive head coaching vacancies in the NFL.

Unlike the Jets and Falcons, the Jaguars set their sights on a former college coach. After rumors flew about interest in a certain former Ohio State University (OSU) coach, the Jaguars sealed the deal on Jan. 14 and officially hired Urban Meyer. Meyer certainly comes with a decorated record and is one of the most successful coaches in college football history. Meyer’s first head coaching job came in 2001 with Bowling Green State University (Ohio), where he orchestrated a masterful turn around of the former 2-9 team, going 8-3 and 9-3 in consecutive seasons immediately following his arrival. He then left to coach at the University of Utah, where he proceeded to go 22-2 in two seasons, capping off his time there with a resounding 35-7 victory against the University of Pittsburgh (Pa.) in the Fiesta Bowl. Meyer then graduated to the University of Florida, where he led the team to national titles in 2006 and 2008. In 2012, he found himself as the coach of the Ohio State Buckeyes, and he continued to dominate. He boasted an 82-9 record as the Buckeyes’ head coach and led them to a national title in 2014. In 2018, Meyer retired from college football, citing health concerns as one of the reasons he was stepping away.

Clearly, Meyer has had enormous success as a college football coach, but questions remain about how well his system will translate to the NFL. College coaches are extremely hit-or-miss. On the one hand, there are names like Hall of Fame coach Jimmy Johnson, who achieved remarkable success after his transition to the NFL, but then there are coaches like Lane Kiffin, who only lasted a season-and-a-half in the league. Even University of Alabama head coach Nick Saban, regarded as the greatest coach in college football history, only lasted two years in the NFL after going 15-17 with the Miami Dolphins. Other concerns for Meyer come from looking at how his former OSU quarterbacks have fared in the NFL. After being cut from the Washington Football Team this season, Dwayne Haskins joins Braxton Miller, J.T. Barrett and Cardale Jones as former OSU quarterbacks under Meyer who could not make it in the NFL.

Based upon his past successes building college programs into championship teams, Meyer comes with enormous upside, but there are undeniable risks. If the Jaguars can utilize their vast amount of assets this offseason, and Meyer can quickly adjust to the NFL, then the decorated college football coach might be adding some NFL titles to his resume soon enough.