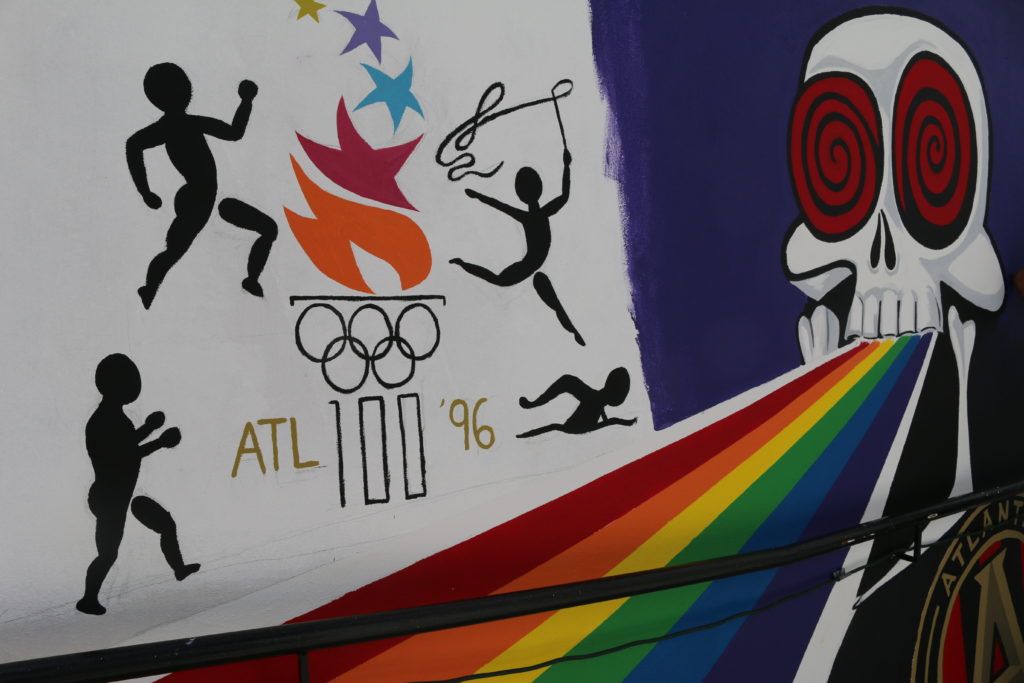 The mural outside Cox Hall features prominent Atlanta icons including the Vortex skull. Claire Pomykala (21C) and Sierra Basquez (21B) hope to finish the mural in time for the Spring 2019 Commencement ceremony./Ayushi Agarwal, Photo Editor

When Claire Pomykala (21C) first pitched the idea of a mural to The Pulse, Emory’s literary and arts anthology, in October 2018, she didn’t think it would get approved. But when The Pulse moved the idea forward to David Fuhrman of Campus Life, he accepted. Coincidentally, he knew of the perfect available space for the students, the Cox Courtyard.

Now, when you walk past the Cox Hall patio, the mural is in full bloom. Dedicated to the city of Atlanta, the mural features historical symbols, including the Atlanta United crest, Vortex Bar & Grill’s iconic skull, an Olympic flame and Midtown’s rainbow crosswalks. While some contributing artists have joined the effort through art-focused organizations like The Pulse and Emory Arts Underground, several students unaffiliated with the arts organizations have also put in substantial efforts.

For Pomykala, the mural represents an effort to revitalize arts at Emory, where art rarely seems to flourish outside promotional purposes. The arts have been on a decline since 2012, when Emory closed its Visual Arts program. Few projects at Emory constitute art for art’s sake, she explained. The mural also serves as a medium for expression and protest from artists across campus.

“[The mural is] there to bring back the arts on campus,” Pomykala said. “I made this mural because I was sick and tired of letting the arts be neglected.”

Jessica Kang (22C), a contributor to the mural, echoed Pomykala’s emphasis on the need to revitalize arts at Emory.

“This mural is just a representation of the arts being brought back to Emory,” Kang said. “It’s a mural of Atlanta icons. It’s setting Emory within the city and its historical context.”

On a sunny afternoon, you may see three different Emory students working on distinct parts of the mural, each armed with a set of paintbrushes, paint rollers and multi-colored paint cans. Though the mural appears close to completion, the artists still have plenty to do. Only the first few layers of paint have been applied and the final layers are still necessary. Annie Schiffer (20C), the incoming president of The Pulse, is currently painting railroad tracks to connect the various Atlanta icons, while Sierra Basquez (21B) works on the Atlanta skyline and sunset.

Pomykala and Basquez have largely taken the lead in painting and organizing the mural.  Basquez has dedicated well over 20 hours a week and eight hour days to the project and Pomykala has taken a lighter course load to make time for the mural this semester. After approval in October, Pomykala and Basquez have spent most of the year working on the mural. Basquez has painted the entire Atlanta skyline, a portion that accounts for nearly a quarter of the mural, while Pomykala has organized the supplies budget and led meetings to coordinate artists.

Basquez identified art as an important part of her life and said she was nervous when she enrolled to Emory due to the lack of a campus arts culture.

“Basquez came to the plate and really stepped up,” Pomykala said. “She’s absolutely wonderful. I never asked her to do as much as she’s done, and she has done a lot to help out, which I’m so thankful for.” 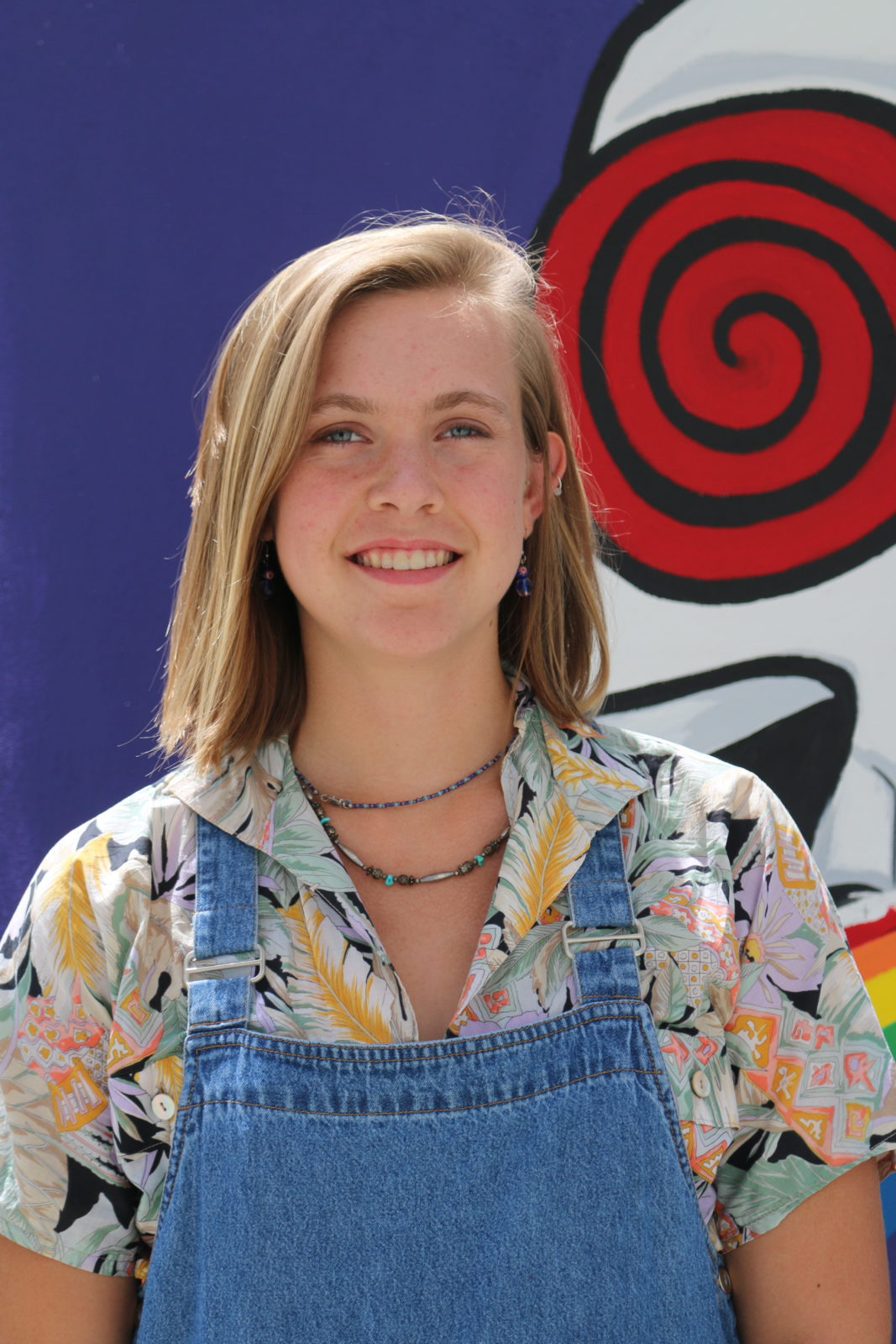 The group hopes to complete the mural before commencement, but rain and the project’s reliance on volunteer efforts have impeded the progress.

In planning the mural, Pomykala and Basquez designed rough sketches, followed by measuring the walls and making sketches on large paper with colored pencil. No digital software was used, and the two spent hours making the final design look close to the final product.

Where most murals are on square walls, Cox Hall’s spans two triangular walls, allowing for a more dynamic viewing experience. The two sections grow and decrease in size and shape, and the ramp is a space of motion. To Pomykala, the mural is there to create a more purposeful harmony between symbols rather than a simple, static artwork.

On March 18, after a $28,000 overallocation of the Student Activities Fee, the Student Government Association (SGA) finalized a 32 percent budget cut to the Media Council for the 2019-20 school year, slashing funding to campus arts organizations and cutting The Pulse’s budget to half its original.

“The arts are dying at Emory because we’re so focused on pre-med and pre-business,” Pomykala said. “Art is such a big part of people’s identity, and to not have [art] shown is crushing that trend.”

WMRE Treasurer Shannon Anderson (20C) wrote in a Feb. 6 op-ed for the Wheel that SGA and Emory administration have not heeded concerns from students pursuing the arts at Emory. The Media Council’s budget cuts followed criticism that the proposed cuts posed a dangerous attack on the arts at Emory.

“We’re going to make do with what we can,” Pomykala said. “We’re flexible, but it’s a struggle.”

The mural has proven impactful: several members of the Emory community who pass by often take a couple extra seconds to stare and compliment artists. Even with rainstorms impeding the artists’ progress, the mural has filled its designated space.

The mural is also personal to the artists working on it, as it holds a therapeutic effect for its artists. For Basquez, the mural presents an opportunity to work on a larger, long-term project, rather than several smaller projects. Pomykala, too, has found personal value in the mural.

“Being able to paint and have so much positive feedback is an amazing feeling,” Pomykala said. “[Painting the mural is] 20 times more satisfying than any other class I’m in right now.”

When the artists finish the mural, they hope that its impact will stretch far beyond the 2018-2019 academic year. Pomykala said that, even prior to its completion, the mural had been sending a message to the Emory community that the arts are back and here to stay.

“Art exists at Emory,” Basquez said. “You just have to dig a little deeper to find it.” 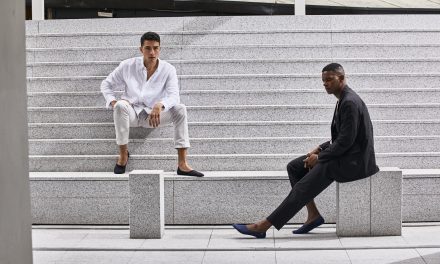