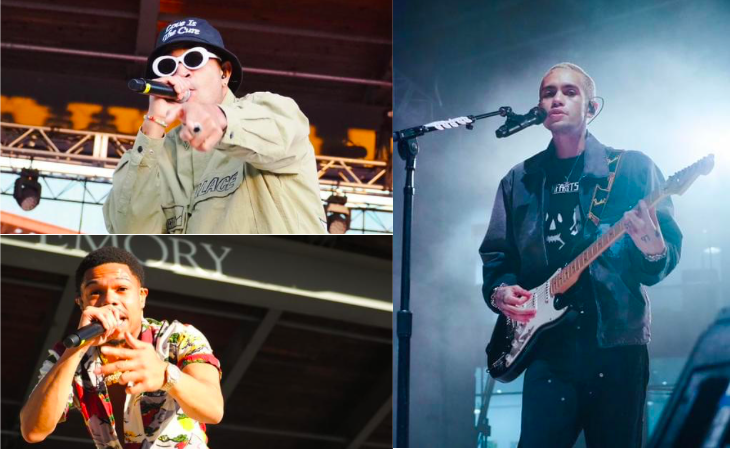 “Thank you, Atlanta,” Dominic Fike said, pretending to walk off stage after opening his set with his hit song “Come Here.” From Fike’s April Fool’s joke to the many hats Bryce Vine wore during his set to Taylor Bennett’s impressive stage presence, Student Programming Council’s (SPC) Dooley’s Palooza on April 1 more than made up for a concert that left some students disappointed last fall.

The concert, which was closed to the public, drew about 3,000 students, former SPC President Thomas Heagy (22B) told the Wheel in an April 2 email.

With well-stocked food and good lighting, Christine Zhu (23C) said that the event was “well put together.” Heagy credited Oxford College’s Student Activity Committee for their collaboration with SPC in planning and executing the event.

“We wanted to provide a festival-like concert experience that any undergraduate student could enjoy,” Heagy wrote to the Wheel. “With three amazing performances, engaging activities and plenty of free food enjoyed by almost 40% of the undergraduate population, we believe we accomplished our goal!” 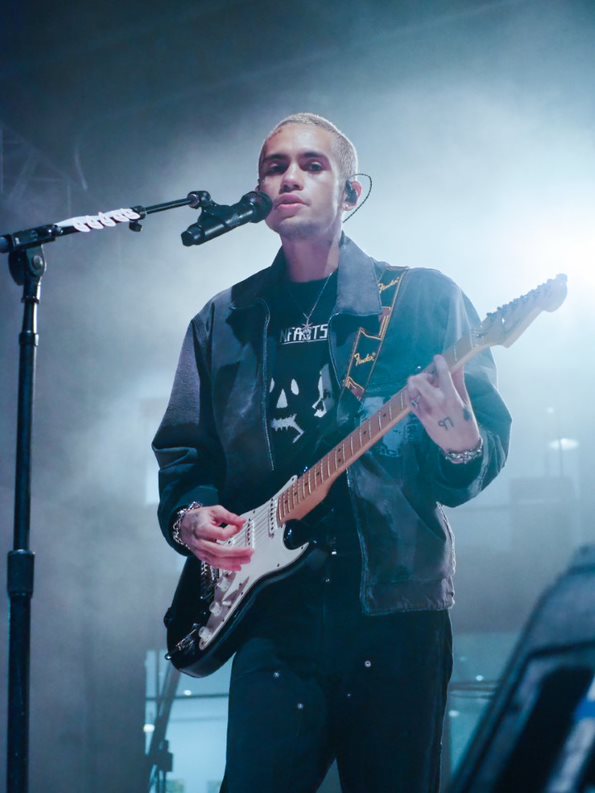 Most recently famous for playing the character Elliot in Euphoria, Fike closed out the night with music from his two albums, “Don’t Forget About Me, Demos” and “What Could Possibly Go Wrong,” as well as two singles: “Phone Numbers” and “The Kiss of Venus.” Fike’s music blends alternative with electro-pop for a unique sound that catapulted him into national recognition with his song “3 Nights” in 2018.

In an Instagram story posted after the event, Dominic Fike displayed a picture of his hand, with the four jokes he told during his set written on his palm. (Courtesy @dominicfike)

Fike was an incredible performer, jumping off stage to run through the pit and telling jokes in between songs. In an Instagram story posted after the event, Fike showed off a list of jokes he wrote on his hand to reference during the show. In one memorable moment during his set, Fike declared, “There’s more college girls here than John Mayer’s had sex with.”

The lineup this year differed vastly from artists SPC has hosted in the past. Previous Dooley’s Concert headlines include AJR in 2019 and Lil Yachty in 2018. At the Swoop’s Ball last semester, SPC invited Jack Harlow and Fetty Wap, although Fetty Wap didn’t show since he missed his flight.

Although the artists this year were less well-known, the crowd clearly connected with the performances, singing along when they could and enjoying the environment.

While Fike was a clear crowd favorite, Vine also drew vocal support from the audience. Near the beginning of his set, a fan threw a hat up on stage with a note asking him to play “Sour Patch Kids,” which he did, closing out his set with his most popular hit.

Vine put on an exciting show, spraying the crowd with water bottles and dancing around the stage in a white SPC bucket hat that had also been thrown up to him from the audience. While some of the songs in his setlist were a bit more obscure than others, Vine extended his mic to the crowd as they belted the lyrics to his hit songs “Drew Barry” and “Sunflower Seeds.” 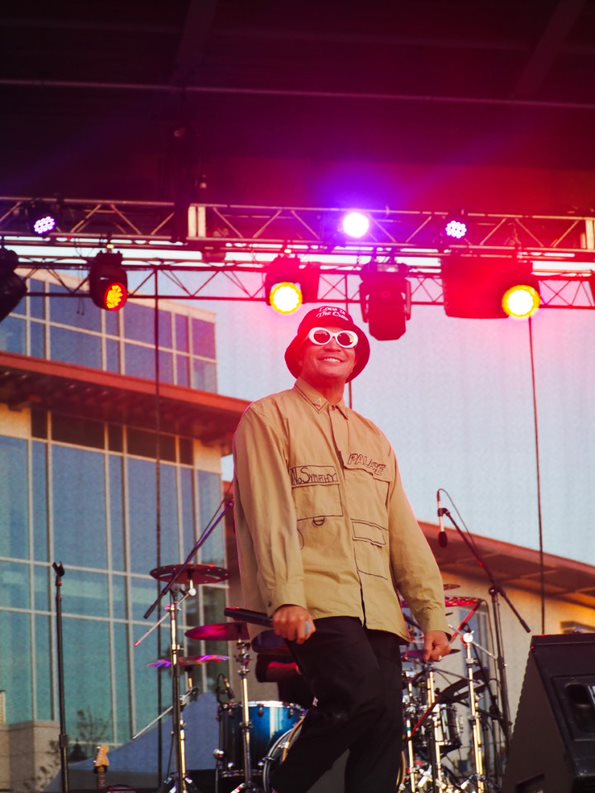 Bennett kicked off the concert and his free college tour at 6:30 p.m. Most famous for his songs “Favorite Colors” and “Broad Shoulders,” the latter of which features his brother Chance the Rapper, Bennett warmed up the crowd and promoted his new song “Fall Short” which had come out earlier that day.

“It’s not about the f***ing money to me for me,” Bennett told the crowd. “It’s about touching people.” 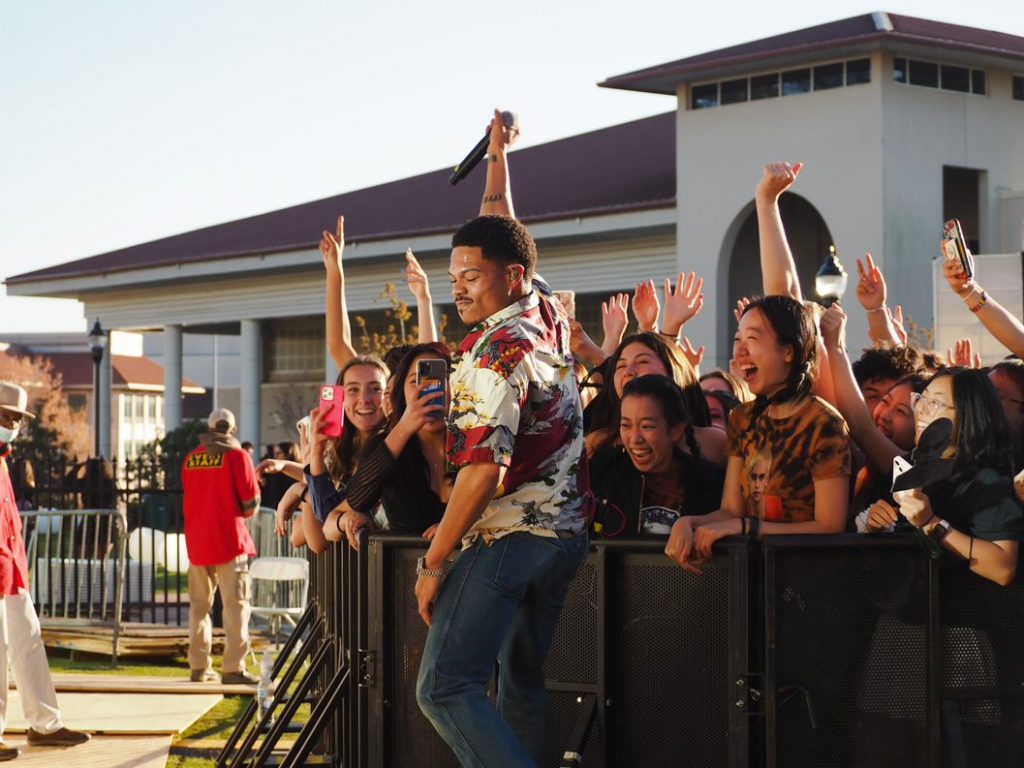 Taylor Bennett put on an engaging concert at Dooley’s Palooza on April 1, jumping down in the pit to interact with fans. (Ally Hom)

Bennett is taking his free tour to six other colleges in the next two months to promote what he called his “small business.” He encouraged crowd members to add him on LinkedIn to grow his network as an independent artist.

With three exciting performances followed by an “After Party” pancake bar, Dooley’s Palooza was a memorable night for many.

“It was really nice,” Sanchi Sabiah (25C) said. “I liked the performance, and it was basically good on the whole.”

Correction (April 3, 2022 at 10 p.m.): A previous version of this story referred to SPC as the “Student Planning Council.” This reference was changed to correctly reflect SPC’s name as “Student Programming Council.”