Student group Emory College Republicans is making a comeback on campus after the club went largely inactive since Spring 2017.

The club disbanded after several club leaders resigned and did not promote College Republican events on campus.

Ariana Gassel (22C) sought to join the club as an incoming freshman this year. But by the time Gassel arrived on campus, the previous College Republicans executive board had abandoned running the club. Gassel said she could not find a club representative at the Fall 2018 club interest fair, so she messaged the club on its Facebook page and contacted several listed club representatives on OrgSync, Gassel told the Wheel. After she did not receive a response for a week, she contacted Frank Lechner, professor of sociology and the club’s adviser, to reform the club.

With Lechner’s assistance, Gassel created a new executive board.

“I met quite a few conservative students on campus and so we basically took it upon ourselves to understand that it is important for other like minded students to have organization like College Republicans on campus,” Gassel said.

Gassel selected herself as president, Bradley Bennett (22C) as vice president and Harrison Cohn (22C) as treasurer after she gained Lechner’s support.

Decline of the Group

“I guess I was moved up a notch [when Skyhar left], so John … was president and I was vice president,” Elias Neibart (20C), who was previously treasurer, recalled. “I can’t recall the people underneath us.”

Mikuta declined a request for interview, but, according to Neibart, Mikuta resigned his position last May because he founded Emory’s Club Swim Team and was elected co-president.

Neibart said he became president after Mikuta resigned. However, Neibart also relinquished the title and his membership because he said he was busy serving as president of the Emory Pre-Law Society.

Neibart said he and Mikuta decided in May 2018 that they would search for new club leadership but admitted the search never occurred.

“We were gonna wait until we got back to campus and see if there were any interested students,” Neibart said. “We just didn’t really look.”

Gassel said she believes the club disbanded because of the club’s pro-Trump rhetoric and because it seceded from the Georgia Association of College Republicans (GACR) in June 2017. The club seceded because it opposed the GACR’s decision not to redact an “anti-Trump statement,” the Wheel previously reported.

“I think they were relatively pro-Trump and that [was] one of the reasons they seceded from the Georgia Association of College Republicans,” Gassel said.

“I would say that [the College Republicans] probably could have done better for leadership in terms of who they selected,” Gassel said.

Gassel said she received permission from the Office of Student Leadership and Service (SILT) to serve as president and appoint people to other executive board positions.

When Gassel, Bennett and Cohn took over, they rejoined GACR.

Bennett explained that it was important for the club to rejoin GACR so they could build support throughout the state. He hopes that by rejoining the state organization, Emory College Republicans will grow and receive the needed monetary support to host more events.

“Since we are a smaller group here than most places … we definitely need a lot of the state support,” Bennett said.

The club held its first general body meeting of the year on Sept. 28 and had advertised on Facebook that they would vote at the meeting on all executive board positions, including president, vice president and treasurer.

Instead, the club did not hold elections for those positions but elected a freshman representative, secretary, philanthropy chair and outreach manager.

The club later modified the original Facebook post so that it did not include that they would be voting on the president, vice president or treasurer.

Gassel told the Wheel that she had not read the Emory chapter’s constitution and is unsure if it requires a formal election process to fill its executive board.

“I have yet to look over it, but I definitely want to make sure that our new members can read it,” Gassel said.

Bennett said he, Gassel and Cohn chose to postpone the vote on the president, vice president and treasurer roles until next semester because they felt changing leadership would inhibit the club’s growth. Bennett noted that there are no more SGA executive board training sessions which he said they all attended, and it could complicate the process if other people were elected to those positions.

Neibart said he is confident in the new club leadership.

“The new people involved are great — they’re really passionate people,” Neibart said. “I just helped [Gassel] out basically explaining what a club was at Emory.”

“The club wasn’t so healthy — they were just all Trump supporters and they weren’t very eager to engage in serious dialogues,” Kleiman said.

Zimm also noted animosity between Emory College Republicans and Young Democrats of Emory when he served as president.

“There were certainly … a bunch of bitter Democrats that treated us like a punching bag since they couldn’t get over losing the election,” Zimm said.

Kleiman described a feud on Twitter between the Emory College Republicans and Young Democrats over the 2017 Georgia 6th district special election between Jon Ossoff and Karen Handel.

“I was very passionate about Jon Ossoff obviously,” Kleiman said. One Emory College Republicans tweet directed at Kleiman read, “What a shame,” and attached a link to a New York Times article announcing that Ossoff had lost.

In June 2017, Young Democrats of Emory tweeted that they were proud of Emory College Republicans for “being smart enough to not defend” Handel’s stance against imposing a “living wage.”

Emory College Republicans replied, “Must be nice to not have anything to do in the summer but s**t post and blame [Republicans for] everything.”

“I absolutely know nothing about that … I don’t think we have a Twitter,” Neibart said. 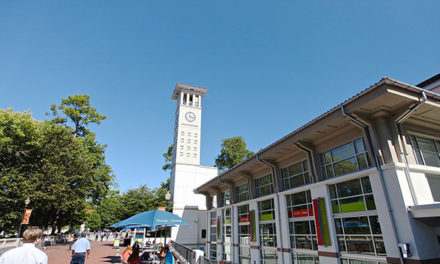