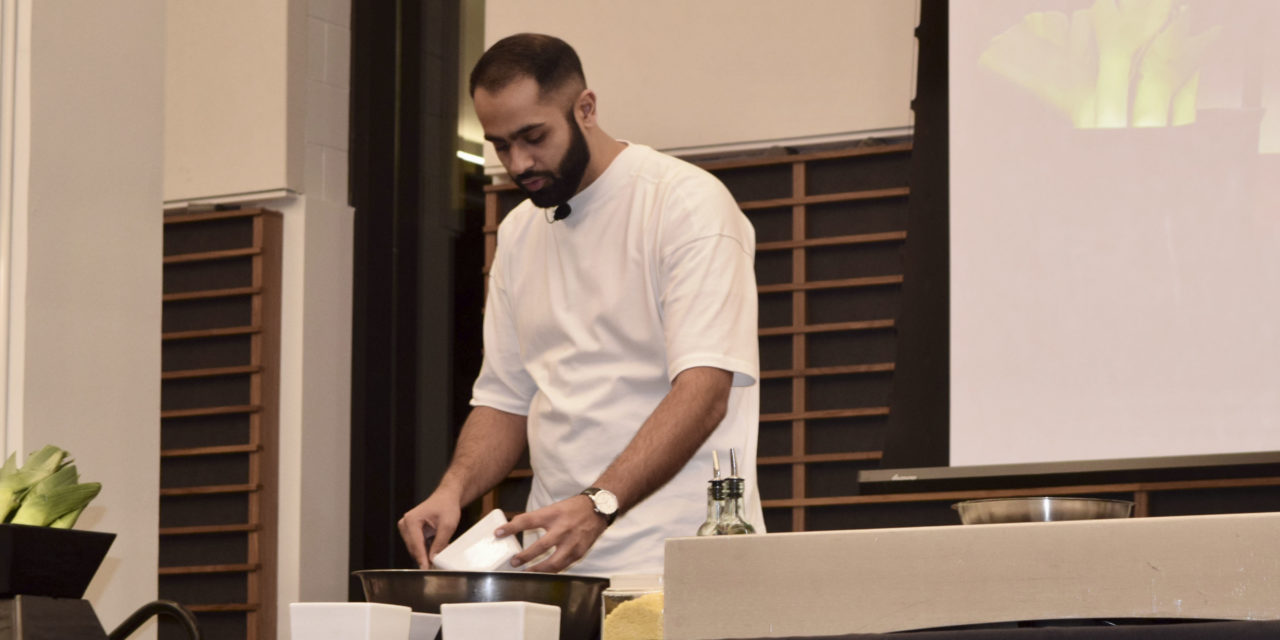 Reality TV star and local chef Farhan Momin (13Ox, 15C) hosted a live cooking demonstration titled “From Murdy Kitchen to MasterChef” at the Greer Forum on Feb. 5 in honor of the grand opening of the new Oxford Student Center.

Momin, a first generation Indian-American from the Atlanta area, returned to his alma mater with a reputation that preceded him. He became nationally recognized for finishing top six on the popular Fox show “MasterChef” in 2018, and now owns the Farmo Cooks pop-up series and the Atlanta Halal Meat & Food catering service. After graduating from Midwestern University’s College of Dental Medicine (Ill.) in 2019, Momin returned to Dallas, Ga. to start his dental practice alongside his passion for cooking.

During the demonstration, Momin cooked three of his signature dishes: the chicken tikka quesadilla, the nihari sandwich and the chora chaat. As he worked, he explained the inspirations behind each dish and reminiscenced on his experiences at both the Oxford and the Atlanta campus.

“Oxford played a huge role in who I am today,” Momin said.

Among the values he gained, he cited long-term friendships, life and studying skills, and cultural understandings — all of which have helped to shape his unique cooking style. To create his first dish, chicken tikka quesadilla, Momin used the same sandwich maker that had facilitated the dish’s invention during his undergrad years.

As a practicing Muslim student that only eats halal food at a time where Emory offered limited halal options, Momin and his friends needed to become creative to eat well. The contraband sandwich maker that Momin kept in his Oxford dorm became key to their efforts. Momin recalled that he and his friends often filled the sandwich maker with leftovers from the various ethnically diverse dishes that their parents had sent them. 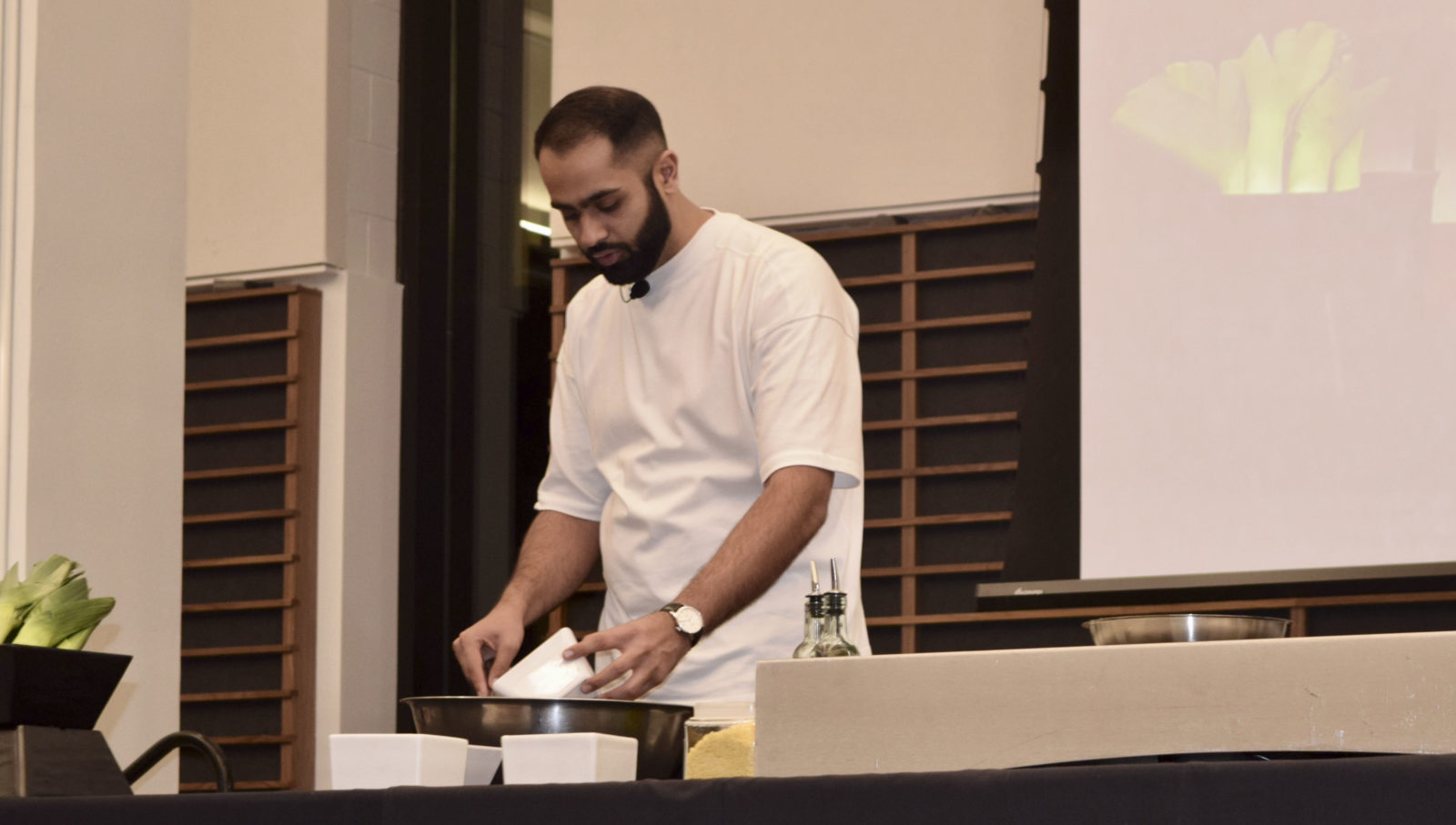 This diverse cooking style of combining different flavors has become Momin’s signature, and he continues to innovate by combining foods from his Southern upbringing and Indian heritage to create new fusion-style cuisines that he showcases at his restaurant.

“I take the flavors of home … but then make it in an approachable form factor for people who don’t know South Asian food in that way,” Momin said.

Nihari is a traditional North Indian-Pakistani stew. During his junior year at Emory, Momin had accidentally overcooked the classic stew and, not wanting to waste food, had the idea to make it into a slider form. When he proposed the addition of the nihari sandwich to the menu of his father’s restaurant, Tava Indian Bistro, it became a bestseller.

Chora chaat, a black-eyed pea salad with tamarind, cilantro, and aromatic vegetables, offered an element of crunch and freshness. The peas were perfectly crispy and were sprinkled with vibrant spices.

Momin mentioned that in his junior year at Emory, he was both applying to dental school and working to fill necessary roles and tasks at his dad’s restaurant. Though he initially struggled to balance the two, he eventually persevered and developed valuable time management skills.

“I realized that everyone … has their journey,” Momin said. “I was lucky enough to get into grad school my first year, but it also involved a lot of sacrifice.”

Momin said he finished his first semester at Oxford with a 2.8 GPA. He figured his dreams of medical school and his envisioned career were over. Clearly, that was hardly the end for him, and he expressed regret that he had let his GPA influence him and his perceived capabilities.

Momin admitted that getting to know his professors on a more personal level led him to realize that he could overcome academic hardships and achieve success.

“Things work out and things happen for a reason,” Momin said. “You’ve got to roll with the punches a little bit, take what comes your way and be resilient through it, because that’s what really defines who you are.”

“I liked … how he tried to connect with us,” Vellore said. “He talked about how he lived in [the Jolley Residential Center (JRC)] and cooked in Murdy [Hall], and I related to it because I live in JRC right now … so it tells us we don’t need to follow just one path in life, there are a lot of paths we can accomplish simultaneously.”

Audience member Kharen Bamaca-Forkel (21Ox) also appreciated Momin’s candidness and reassurance that grades do not define a person’s worth.

“I really did enjoy his presentation and how he talked and tried to make it more conversational, rather than a lecture,” Bamaca-Forkel said. “I found him very relatable and his stories were very amusing. From what he was saying about how a number doesn’t define you was very inspiring, because I feel like a lot of students pressure themselves here and that’s something [that] is good to remember.”

Throughout the informal and conversational event, students and faculty asked questions about Momin’s time at Emory and his success in his career.

One audience member asked, “What was it like on the set of “MasterChef,” and what was that whole experience like for you?”

“I wanted to feel what it felt like to get yelled at by Gordan Ramsey,” Momin joked. “But it was a really neat experience, being there with the high pressure. … It was real. Definitely … an experience that I wouldn’t change.”

However, he also noted that filming also posed a stressful and mentally challenging experience for the contestants, who were completely isolated from the outside world and had limited communication with their loved ones. He noted that it was his determination toward showcasing the mixture of different cultures and cuisines in a single dish that kept him going.

“I was expecting to learn more about cooking, but it was really cool to hear his experiences with Oxford and his career journey,” Sierra Talbert (21Ox) said.

Noor Aldayeh (21Ox) mentioned that she enjoyed how laid-back and relevant the event was.

“He really related a lot of things to stuff that’s happening now, whether that be small things like dorm life, or bigger things like how you’re going to use your education in the long run,” Aldayeh said. “I think it was really enjoyable … and the food is absolutely wonderful.”

As the event wrapped up, audience members murmured with excitement for the opportunity to sample the dishes as they were laid out, while Momin shared some final, reflective words about his interpretation of cooking.

“Indian food [in other countries] is mostly just Indian flavors that they took and made it their own. … That’s how food progresses, that’s how food evolves,” Momin said. “That’s exactly what I’m trying to showcase here tonight. … This is hopefully the next generation of Indian food.” 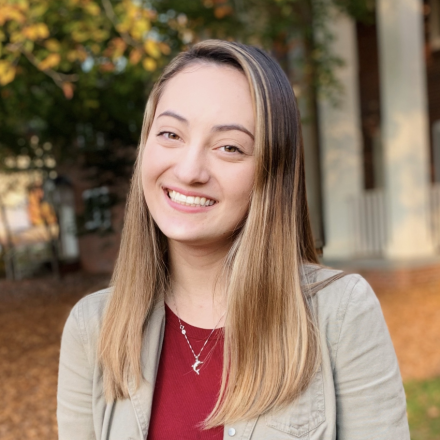 Madeline Bryce (21Ox, 23C) is from Pelham, New York, majoring in international studies on a pre-law track. Outside of the Wheel, she is the Chief Justice of the Oxford Student Government Association and co-President of Outdoor Oxford. In her free time, she enjoys reading, working out with friends and talking about politics.