A few years ago, Emory alumnus Farhan Momin (13Ox, 15C) was making Indian-style quesadillas with a sandwich maker in his Oxford College dorm room. Now a fourth-year dental student at Midwestern University (Ill.), Momin is competing on the ninth season of “MasterChef.”

He earned his spot on season nine of “MasterChef” after attending an open casting call in Chicago in September 2017, and his MasterChef run is only gaining momentum — he has now advanced to the top six, a feat that he describes as incredible and humbling. After surviving 13 cutthroat elimination rounds, Momin’s spiced-filled dishes, such as his oven roasted halibut, have packed a punch, allowing him to emerge as a top contentender in the competition.

“Honestly, it’s insane … the fact that I have made it this far, and gotten the feedback I have about my food,” Momin said. “Who would have dreamed that Gordon Ramsay, Joe [Bastianich] and everyone else would taste my food and really like it.” 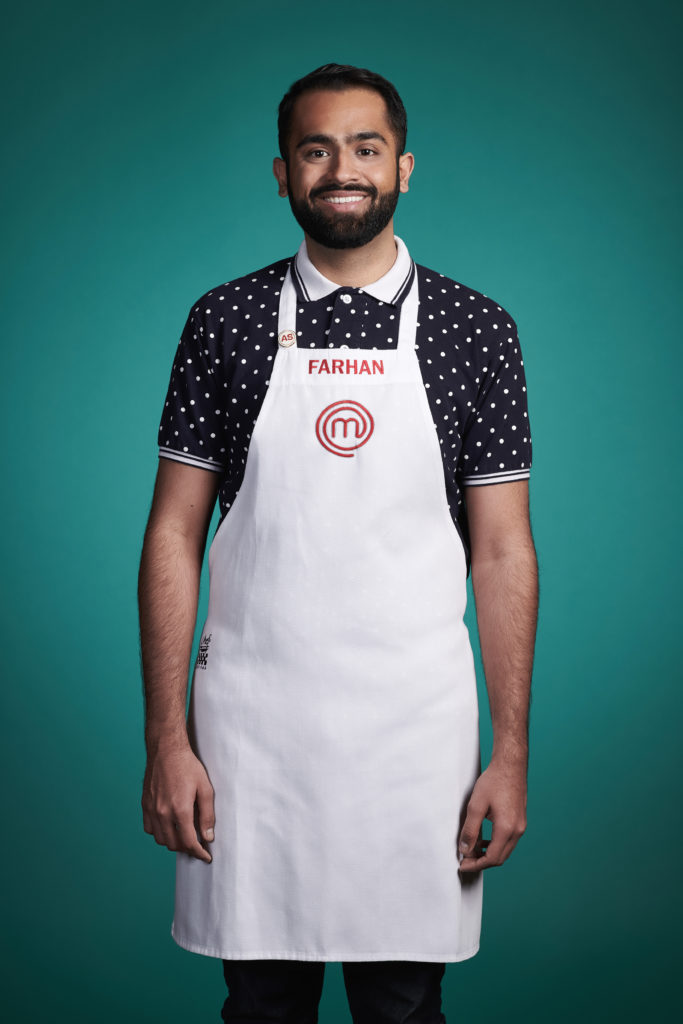 Born to Indian immigrants turned restaurateurs, Momin, from Duluth, Ga., is no stranger to the kitchen. His first taste of cooking came at age seven when, one day, he had the spontaneous desire to help his mom prepare dinner. As soon as he cut his first batch of green beans, his passion for the culinary arts blossomed, Momin told the Wheel.

With no formal training, Momin developed his culinary skills organically. A science enthusiast from an early age, culinary icon Alton Brown’s television show “Good Eats,” which explored the science of cooking, further fueled Momin’s interest in cooking. However, it wasn’t until he enrolled in a culinary arts program at North Paulding High School (Ga.) that he noticed his true passion and knack for the craft.

There, he learned the fundamentals of classical French cuisine and experimented with combining these learned techniques with familiar flavors. As part of the program, Momin also completed a final project where he developed a restaurant concept. As executive chef of his team, Momin used molecular gastronomy to redefine classic Americana cuisine.

“[The program] taught me the backbone of classical cuisine, and I started combining that with my Indian roots,” Momin said.

This method of melding unlikely flavors and concepts has become Momin’s signature cooking style. Momin’s ability to creatively concoct popular cuisine helped him impress “MasterChef” judges with his tandoori chicken sandwich: an Indian-inspired spin on the classic Southern fried chicken sandwich. Celebrity chef and “MasterChef” judge Aaron Sanchez called the dish one of the best things he had ever tasted in the “MasterChef” kitchen.

“My style is taking something that people are really familiar with — a flavor, a concept or taste — … [and] making you look at it a different way,” Momin said.

Momin said his undergraduate experience at Emory further fostered his growth as a chef. Inspired by the diverse people with whom he interacted on campus, Momin challenged himself to create meals that incorporated these differing perspectives.

“Being active on campus, I met tons of people, so that really influenced the way I cook,” Momin said. “Instead of cooking food I want[ed] to eat, I was thinking about how I could make Indian food more approachable to everyone, and how [I could] take our shared stories and turn them into familiar food.”

Saad Mohiuddin (13Ox, 15C), Momin’s roommate at Emory and close friend, said he has had plenty of opportunities to sample Momin’s cooking, as Momin would often randomly become inspired to develop new recipes. He said Momin’s knowledge of flavor profiles and his ability to integrate both his Indian and American backgrounds in his food greatly enhance his craft.

“He really knows what flavors work together. He’s an artist, an artist who is very comfortable with the colors on his palate,” Mohiuddin said. “He’s probably the best chef that I know.”

Despite juggling academics, a social life and extracurricular activities at Emory, Momin said he still found time to fuel his creativity in the kitchen. When his father approached him about opening their family restaurant Tava Indian Bistro in Decatur, Ga., which opened in 2015, Momin developed most of the menu in his Clairmont apartment, he said.

One of the dishes was his signature nihari sandwich — slow-braised shredded lamb seasoned with Indian spices and served on a bun — a flavorful recreation of a classic American sloppy Joe, he told the Atlanta Journal-Constitution. Momin’s Instagram features many of his other innovative spins on popular cuisine, including his tandoori chicken and pakora waffles, ras malai tres leches cake and chicken tikka tacos.

Although Momin is currently attending dental school, he finds time to practice his skills and invent new dishes, some of which become additions to the menu at Tava. He said his family has instilled him with discipline and sacrifice — values that inspired him to pursue a professional dental career while practicing his passion.

“Most days, I go to class and I’m home by 5 p.m., but … instead of eating out, I force myself to make dinner,” Momin said. “And when I do that, I make myself something new. I’m constantly creating, constantly inventing new things.”

For Momin, cooking isn’t just a hobby. He said it’s his creative outlet — an opportunity to both share his identity with others and to escape from his hectic routine as a dental student. Momin finds a parallel purpose between his passion and his profession — they both bring joy to people’s lives. Whether he is perfecting someone’s smile through dentistry or making them smile with his food, Momin said that he is most fulfilled by making people happy.

“The joy people get from eating your food is immeasurable,” Momin said. “That’s what keeps me going — just seeing the joy I bring to people.”

UPDATE: This article was updated on Sept. 5, 2018 at 9:04 p.m. to reflect current developments in MasterChef.

Copy Editor | [email protected] Bethany Greene (20C) is from Spartanburg, S.C., but was raised in the small Caribbean island of St. Kitts. She is an economics major and plans to pursue a career in architecture. In addition to the Wheel Bethany serves on the Emory Center for Women Praxis Student Leadership Board.