Catching Up with Adrianna Baggetta | Coach’s Conversation in COVID 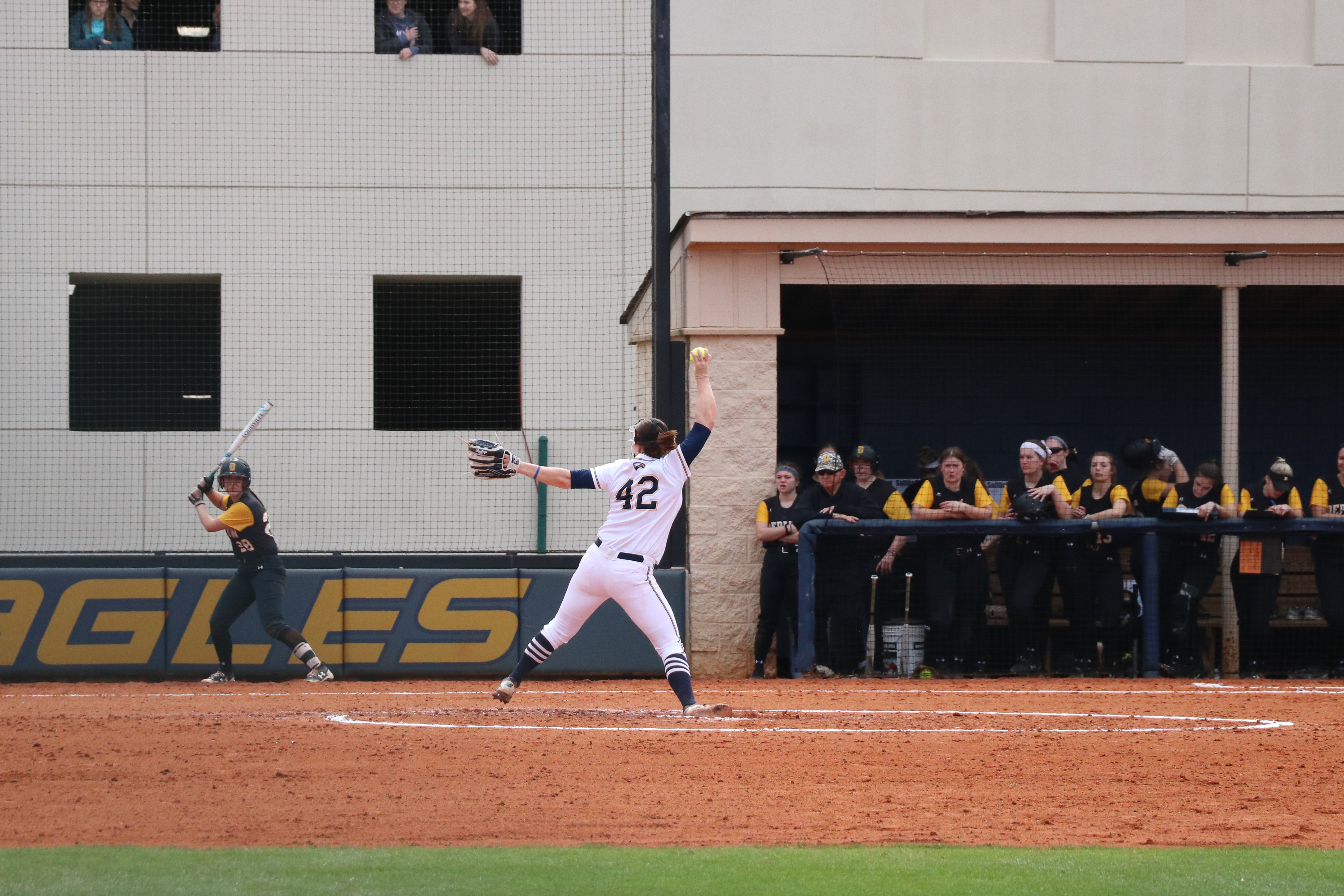 The Emory University softball team held its first official practice on Feb. 9, almost a year after the team last took the field on March 10, 2020, in a game against Dickinson College (Pa.) before the COVID-19 pandemic.

Along with the rest of Emory Athletics, the softball team was unable to have its traditional fall offseason during which the team would practice, play exhibitions and prepare for the upcoming spring. While head coach Adrianna Baggetta recognizes resuming practices after an almost year-long hiatus presents its challenges, she is thrilled to finally be back on the field and believes the team’s process-oriented approach will help tremendously in their restart. The Wheel spoke with Baggetta about resuming practices and the future of the softball program.

Andrew Feld, The Emory Wheel: You brought in five freshmen this year. What have you done as a coach to help them transition to playing at the collegiate level?

Adrianna Baggetta: We’re still working on that, but I think all fall we did as much as we could via Zoom and conversations with upperclassmen just to understand the game. Since we hit the ground running here in February, we try to make up for lost time and educate them as quickly as possible. But a lot of it is conversation, and I think you don’t get field experience until you actually get the field experience. So, they’re working on that as we speak.

TEW: Due to COVID-19, you were unable to have an official fall season. How will the lack of playing in the fall impact the team?

AB: It just takes away from what they love and the passion of the game, but it gives you an opportunity to grow in relationships and understanding of teammates and the team dynamic. I think we have time to sit back, reflect and understand who you are as a person, what your needs are and where you can go along with your teammates. You don’t really take the time to do that when you’re on the field and consistently doing physical activity.

TEW: You have already started holding official practices. How has it felt to finally get back on the field?

AB: It’s been amazing. I think throughout [the pandemic], this is the thing that has kept them committed and driven. I can’t praise our student-athletes enough for the commitment that they have made to this program and the things that they have done to keep moving forward. It’s been great.

TEW: In terms of conducting practices with all the COVID-19 restrictions, what have you done that has worked, what has not worked and what lessons have you learned?

AB: The biggest lesson is it’s really hard for the people on the other side of the field to hear you with a mask on, so you have to speak louder. Early on, we had to stay in small groups, so it was nice to do a little bit more individual position and individual athlete work. Now we can put those small things into the bigger picture. But again, it’s just that it’s the spring, and we’re probably where we would be in the fall.

But other than that, it hasn’t been that different. You keep yourself separated; you have to be. I have to talk louder, and we can’t be real close. As teammates, you want to high five and be right up on each other and celebrate, so you take those things away. But just being on the field has been outstanding, and I think we roll with whatever Emory tells us — the rules and guidelines that we need to follow. We just implement them and go.

TEW: What do you miss most from pre-COVID times?

AB: The easy conversation where you don’t have to set something up and we have to be six feet apart. Somebody can just drop by my office and there doesn’t have to be such a plan all the time to make sure that we are going by [the COVID-19] guidelines. And just those easier relationships where you have that face-to-face conversation that can happen at the drop of a hat instead of that Zoom call or phone call.

TEW: What are you most excited about for the future of softball?

AB: The opportunities that we’re given and just getting back to competition, building relationships and watching young women continue to thrive in an environment that they love and set them up for the future. It’s those struggles that make you better, and you can understand them in the moment versus “Why are we doing this now when we don’t see the result?” We obviously know that the result of this is going to be something great down the road and because of this we’re going to be better. But you want to see it sooner than later.

Our student-athletes only have a small window. I think that’s what we’re forgetting in all of this is that they have four years to compete. So every year away is one less for them athletically because of the NCAA rules. So letting them have that opportunity to be back out there for their entire career, just as I was and the people before them were, is a big deal. It’s the beginning of the end for a lot of female student-athletes and actually a lot of student-athletes’ careers in general.

TEW: Is there anything else you would like to add?

AB: For my team, I can’t be more proud of the way that they’ve conducted themselves throughout the fall and the spring and just the way that they stayed committed to Emory University, to the athletic department and to Emory softball in making decisions. Academically, they got things done in the classroom. They stayed safe and healthy, making the right decisions. The freshmen have grown and learned on campus when it’s been one of the hardest times to ever be on a campus. So just how proud I am of my team, and I can’t wait to see where we go. 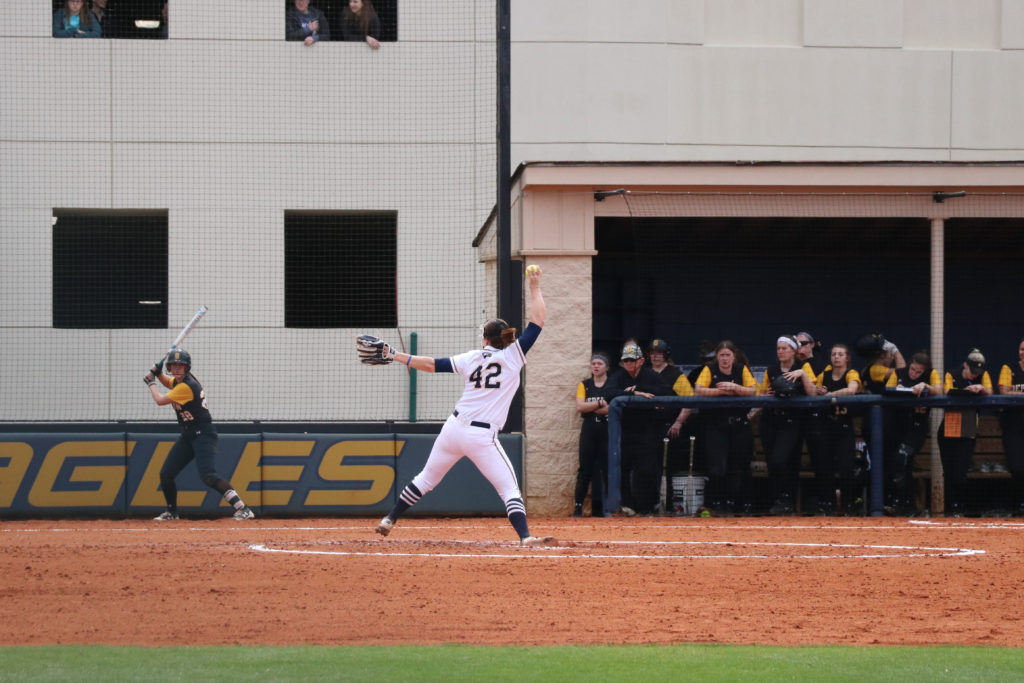 Then-senior pitcher Madeline Maday goes through her windup during a game against DePauw University (Ind.) on March 5, 2019. Emory’s softball team now returns to the field to open up the 2021 season after COVID-19 interrupted competition in 2020. (Courtesy of Kushal Bafna)