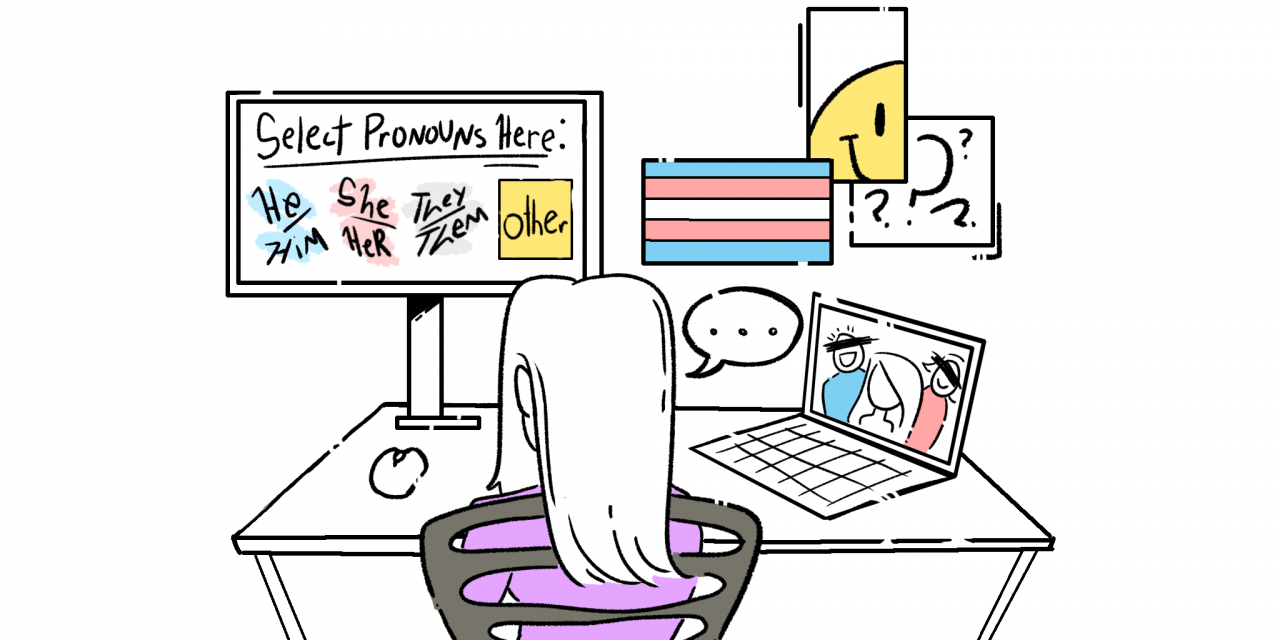 When Julian Currents (22G) came out during their Ph.D. program at Emory University, they said they didn’t encounter many negative social experiences associated with the process: they had been largely absent from campus life due to the pandemic. By the time COVID-19 protocols were loosened, they were already at a point in their program where they didn’t need to spend much time on campus.

Currents finally got their primary email address changed during May, but the process wasn’t easy: they could not do it themselves, and it was a multi-step procedure with many people involved that included “reporting an incident” to Identity and Access Management. Additionally, they said that the only reason they were able to facilitate the name change was because they are becoming a faculty member at Emory.

“I’m in this gray zone between having graduated but still being a student in the system,” Currents said. “They only changed my name because I’m going to be a faculty member and continue on.”

Currents felt that it was “very gross” that only faculty can change their information, and adult graduate students are not able to control how they are registered in the system.

“All students are adults at Emory, legally, which is another thing that sort of blows my mind about all of this,” Currents added.

Emory recently announced that students will be able to designate their pronouns on Online Pathway to University Students (OPUS), the University’s official student information platform. Modifications made to the Student Name and Pronoun Policy in June now permit students to make changes in OPUS.

“Current students talk about gender differently and identify differently than students from even a few years ago,” Director of LGBT Life Danielle Bruce-Steele said in an email to the Wheel. “Emory’s policies reflect this shift among students and the associated changes in language.” 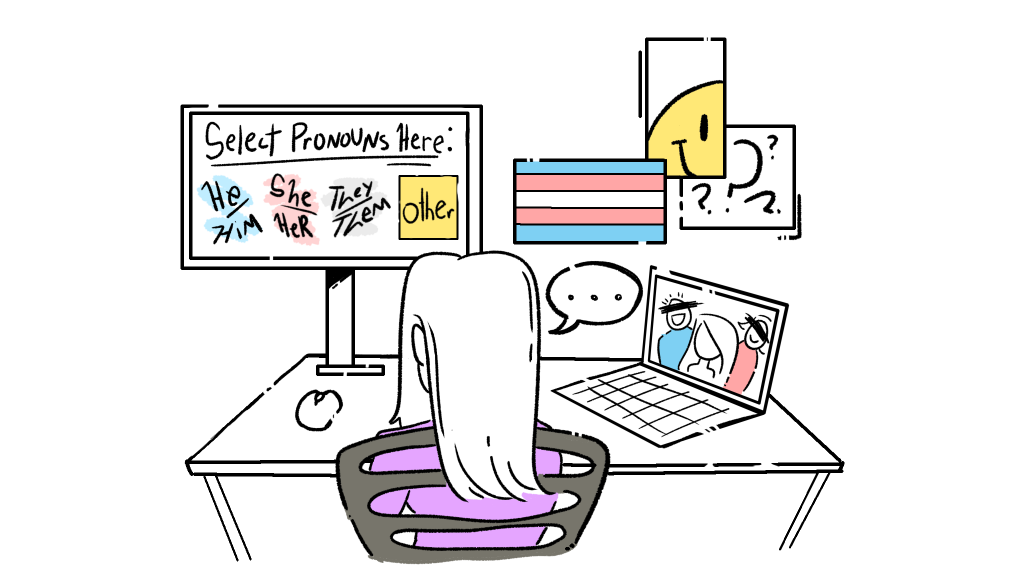 As a trans woman, Aqua Chen (24C) said that she appreciates some of Emory’s resources. For instance, Emory Student Health covers a lot of her transition-related medication, including hormones and procedures. She also said that the Emory community is pretty accepting as a whole.

Chen added that her professors’ ability to now be able to see her pronouns will be a convenient addition to her academic experience.

“Last school year, I remember a lot of instances where I’ve had to awkwardly explain that I’m not a guy, and that I don’t want to be referred to as the name I registered as or he/him pronouns,” Chen said.

“It helps people feel more included if you’re sharing your pronouns, because being referred to as how you want to be referred to is fundamental,” Bharadwaj said.

According to Bharadwaj, Emory PRIDE is always trying to listen to and factor in student opinions on how they can feel more included. He noted that while the University is doing a great job supporting queer students, Emory could still make improvements.

The University also launched the Student Characteristics Project this month. As a part of the project, students will have the choice to disclose characteristics including gender identity, sexual orientation, first-generation status, military affiliation, religious/spiritual identity and ethnicity in OPUS.

Institutional research and design support will use the data collected through the Student Characteristics Project to “look for opportunities to improve the student experience.”

Bruce-Steele said that Emory is clearly a higher education pacesetter on transgender and gender inclusion, giving credit to policies like the preferred and chosen name policy and the trans-inclusive healthcare plan. Emory also allows people to use the restroom that they are the most comfortable in.

“The trans experience is not monolithic,” Bruce-Steele said. “Each student brings different backgrounds and experiences — as do students from different racial and ethnic groups — when evaluating the inclusiveness of our campus community.”

Although Emory has received praise for its inclusivity efforts, some students have critiqued the faults in its policies.

Students have to scroll past their dead name and their gender marker — which is actually a sex marker because the options are male and female, Currents added — before being able to update other preferences such as pronouns, military affiliation and ethnicity.

“I logged into OPUS to check out what this looks like in practice,” Currents said. “It feels obvious that trans people weren’t really centered when constructing it this way.”

For some students, changing their pronouns is not as simple as a small change on OPUS. Currents expressed concern about how a student might deal with having a name change on their diploma if they have unsupportive parents.

“I wonder how much of this will be kept safe from potentially abusive family members,” Currents said.

The Student Name and Pronoun Policy states that students can choose to have either their “legal name” or “designated name” on their diploma. The policy warns students that choosing their designated name “may cause anticipated and unanticipated rejection, delay, scrutiny, and/or requirements for additional proof of identification associated with any applications for employment, licensure, credentialing, visa applications, or other processes requiring education records.”

If a student chooses to list their designated name, their diploma will not match their transcripts and enrollment verifications, which will display the student’s legal name. Their diploma would also not be eligible for the apostille or great seal service — which authenticates official signatures on public U.S. documents for recognition in foreign countries — and would not be able to be verified through the National Student Clearinghouse.

Additionally, “directory information may be disclosed to the public” under the Family Educational Rights and Privacy Act, according to the Student Name and Pronoun Policy. This information could include a student’s legal name, designated name or both.

Students who do not want this information available to their parents have the option to withhold directory information.

Information students disclose related to gender identity, sexual orientation and pronouns displays only on their own self-service page and on faculty class rosters within OPUS, according to Emory’s Office of the Registrar. The information does not show up on students’ guest access pages, meaning it will not be visible to those who log in using a guest account.

Chen raised concerns about the difficulty some transgender students may face when requesting to room with someone of the same gender identity.

Although she eventually settled on a single in a different residence hall, Chen said her initial second-year housing assignment was in an all-male fraternity. She had already told Student Intervention Services about her situation, so she was shocked after she first learned her room assignment. The situation was resolved after she spoke to the housing office.

“It’s a bit of a scary situation, especially for people from less accepting backgrounds,” Chen said. “We tend to have a lot of internal fear about coming out in any way, even if it’s in a progressive place.”

Vex Hutton (24C) also experienced a negative interaction with a  professor for their introductory history class. After they had previously mentioned their non-binary identification to him, he responded that he had never had a student with “different” pronouns, and it would be difficult for him to use they/them pronouns.

As the class was discussing The Prince by Niccolò Machiavelli, the professor referred to the class as a “group of 11 women and seven men.” When Hutton asked him not to refer to them as a woman, he responded, “Well, I don’t think you should have those pronouns. I don’t think you’re right.”

“It was insane language,” Hutton said. “I was really shocked and surprised that he would say that…he was kind of telling me that [I] should identify as a woman.”

Hutton said that they were concerned about how the OPUS pronouns might put first-years at risk, especially those who have had only good experiences with professors. If a person were to input their non-binary pronouns that would label them as gender-queer, they worry that they might happen to have an older, tenured professor who misuses their pronouns.

“It’s a little freaky, and I’m definitely not going to use it,” Hutton added. “I would rather have the discussions with the professors I trust and deal with the ones that I don’t.”

Currents also questioned if Emory will do anything to follow up with the pronoun additions in terms of broader support services provided to trans students, such as liaison positions to help facilitate such changes. They emphasized the importance of faculty-wide mandatory training on how to respect pronouns, because they are certain that Emory has professors who are not going to care.

Identifying characteristics such as religion, military affiliation or sexuality can put students in a vulnerable position, Currents said, which makes university life inherently harder. Additionally, being identified and tolerated is not the same thing as being supported, Currents added.

“It’s great that Emory is taking a first step, a little shuffle, toward recognizing that there are trans students,” Currents said. “I wouldn’t say it’s supportive, because, in order to be supportive, it would be proactive about supporting all the communities and doing large structural changes.”

These changes could include implementing administrative positions dedicated to assisting students and faculty through certain processes, such as changing their name in Emory’s system. Trans students also exist at many intersections of oppression, Currents explained, so the University should increase mental health resources and wrap-around services to facilitate more support.

“[These things] could be handled by a caseworker,” Currents said. “That would be a more trauma-informed response than ‘Here, you can change it all yourself, good luck!’”

The Problem with Student Loan Debt Is Being Compounded