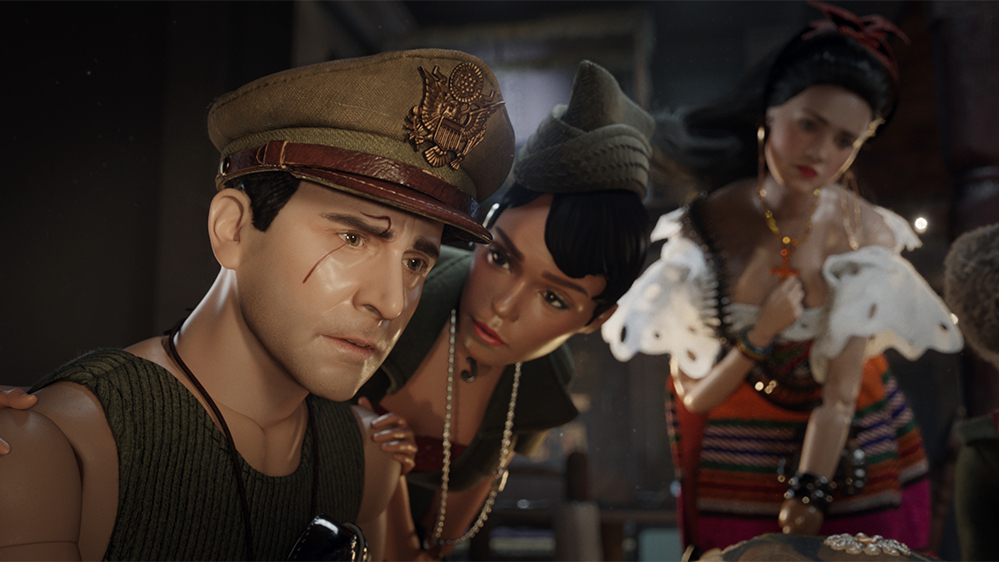 Legendary director Robert Zemeckis has tackled time travel, trains to the North Pole and tightrope walkers, but now he’s going smaller in more ways than one. His newest flick, “Welcome to Marwen,” captures artist Mark Hogancamp (Steve Carell) and his imaginary doll world of Marwen. After Hogancamp is severely beaten by five men and loses all his memories, he copes with his trauma by making and photographing dolls, who each represent people in his life. In this world, Hogancamp is Captain Hogie, a bold World War II general who fights Nazis alongside his team of female soldiers, including GI Julie (Janelle Monae) and Anna (Gwendoline Christie).

The film is based on true events and was inspired by Jeff Malmberg’s 2010 documentary “Marwencol.” Unlike in the documentary, Zemeckis uses motion-capture technology to show Hogancamp’s alternate world adventures in Marwen, and he blends his real world with fantasy to create a dynamic cinematic experience.

The Wheel participated in a roundtable interview with Zemeckis and Carell to discuss “Marwencol,” their filming experiences and motion-capture technology. The film was released on Dec. 21.

Jesse Weiner, The Emory Wheel: Steve, you’ve been in many award-winning films, but you have yet to star in an action film. Do you, like Mark, ever fantasize about playing an action hero?

Steve Carell: No, I don’t think I ever have. I’ve never thought of myself in that vein or in that genre. I would do it happily; it would be fun. There’s some movies you think that are in your wheelhouse and others you can’t even imagine. But by the same token, a movie like “Foxcatcher,” which is completely on the other side of the spectrum, I would have never imagined being in that movie, so you never know. Never say never.

Mike McKinney, CW69: Did you guys watch the documentary on [Hogancamp’s life], “Marwelcol,” and did it help with how you portrayed this part and how you directed the film?

SC: It was the whole impetus for me to be involved with this in the first place. I saw the documentary and I couldn’t get it out of my head. I was moved by him and his story. We did meet him, and he’s exactly as you’d hope he’d be, and more so. He’s a very kind guy and generous and self-deprecating and really funny too. He has a dry sense of humor. When you’re portraying somebody who actually exists in the world, you don’t want them to feel like they’re a science project, that you’re examining them or trying to see how they drink a cup of coffee. It’s much more about trying to connect with what they went through and who they are as a human being.

Matt Rodriguez, Shake Fire: The documentary itself is very well received. Did you do anything to make sure you were doing the documentary justice and weren’t just retelling the same information?

Robert Zemeckis: Oh absolutely. I hope that’s what people think. We were very respectful of what the documentary was doing. Obviously Mark’s story is very moving and very heroic, but what the documentary couldn’t do that a movie could was take us into the imagination of Mark. It became apparent to me when I saw the documentary the first time that he has taken these photos, but in between these photos were these elaborate stories that were only in his mind. I thought that’s what a movie can do that no other medium can.

JW: Was the motion-capture used in this film more difficult than the animation in “[Who Framed] Roger Rabbit” or “The Polar Express”?

Performance capture is wonderful because these actors perform the entire performance of the creature, the doll in this case. Animation is kind of like acting in real slow motion. Animators act though their pencil, but it takes them weeks to get from there to there, [while] an actor can do it in three seconds.

MM: Mark is such an interesting character. Was it hard to get inside his head?

Carell: It was challenging because you can only assume what this person had gone through and what he’d lost. In talking to the real Mark, he not only lost his memory but also his ability to speak. He had to relearn how to walk and talk and [even] how to write his name. His motor skills were severely impaired, and it was a very methodical process back from that. The point at which this film picks up his story, he’s gotten better but he still has a long way to go and a long road ahead of him.

Incidentally, last week I got an email from Mark and he said that his motor skills are improving to the point where he’s starting to illustrate again. All of these things that he has done in the real world have been extremely helpful, not just physically but [also] emotionally. All of the healing that he’s done through this odd little world he created is kind of miraculous. It was definitely a challenge [to play him]. I just don’t want to be cavalier about explaining how I did it because I can’t even begin to comprehend the sort of pain and suffering this guy went through. In meeting him, I felt like it was my responsibility to at least try to get across the kindness and uncynical nature that is pervasive in him. He’s a remarkable guy.

MR: Steve, you essentially play two characters in this film, Mark and his alter ego, Captain Hogie. What was it like juggling these two very different characters in the same film?

SC: It was fun and exciting to be able to do two characters that were related. There is a thread between them obviously because Captain Hogie is this alter ego, this more perfect version, the imagined version of Mark’s dreams. And I think it’s something a lot of people can identify with because I think everyone secretly has the heroic version of themselves inside. Like what would be more powerful version of me or the more swashbuckling or the stronger or more self confident? He used all those things to kinda live through this other entity to get beyond so much of the pain and fear he was going through. That’s something I think the movie touches on a lot is that Mark lives in perpetual fear and to use a character like that that’s so powerful and to be surrounded by these women who are so powerful to ground yourself in a sense.

Emma Loggins, Fanbolt: What do you hope families or individuals who see this, specifically during the holidays, take away from the film?

RZ: It’s hopeful. It’s one of those movies that’s heartbreaking and heartwarming at the same time. It’s thought provoking, entertaining, sad and funny. It’s everything that I like to see in a movie.SC: I think of Mark as someone who lives on the fringe, and I feel like this movie itself does in its own way. It’s odd. It doesn’t really fall into a category. It’s not something that’s easily explained. But all those things can be said about Mark. You can’t really classify him. He’s an artist. He’s a nonconformist. There’s a message of acceptance and taking a chance on something you might not get from external presentation. But, if you dig a little deeper, you can find something kinda beautiful. That’s what I feel about Mark.