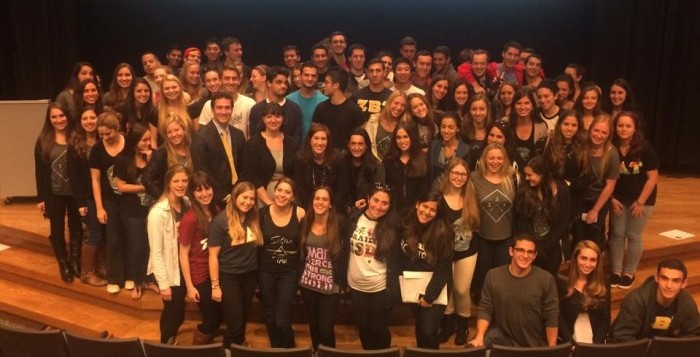 Emory is the first university to host a full-length Safe Smart Dating program – until now, only three pilot programs had been tested at universities since the program’s launch last year.

Upon entering the auditorium, the event’s more than 100 participants were assigned to smaller, peer-led discussion groups.

Representatives from JWI and the ZBT national chapter led a presentation about different types of abuse found in college relationships and dealing with cases of assault.

After the facilitators explained a particular issue, participants split up into their small groups. The attendees were given news articles and hypothetical scenarios, as well as shown videos to spark discussions in the groups.

“It’s an engaging conversation that has [participants] not just listening to a lecture but has them actually participating in how you would address these situations,” National President of SDT Michelle Carlson said.

Another interactive feature of the program was the live-text surveys. Upon describing the different types of dating abuse, the presenters put up a poll asking attendees whether they had experienced any kind of dating abuse, and if so, what kind.

Participants could text in their responses anonymously and see how people in the room answered on the screen in real-time.

“It was really sobering to see the numbers in your own community as opposed to just random statistics,” College senior Jamie Shulman said. “I think it was really eye-opening for specifically Emory campus and what goes on here.”

College senior and President of Emory’s SDT chapter Lindsay Baker, worked with the national SDT chapter to bring the Safe Smart Dating program to campus. She said she felt there wasn’t enough engagement from the Emory community on issues of sexual assault.

“There’s not a lot of public things going on in response to sexual violence on campus, especially within the Greek community,” Baker said. “We wanted to really be the pioneers and do something about it instead of just sitting back.”

Carlson noted that the Safe Smart Dating program was unique in that it engages both men and women, and that this effort is coming from Greek organizations.

“There’s a lot of negative stereotypes about Greek men and Greek women,” Carlson explained. “We have an opportunity to be leaders in this area of domestic violence to work together and make a difference on college campuses.”

The program was also LGBT-friendly. The hypothetical scenarios discussed at the event deliberately used characters with gender-neutral names so that they could apply to all types of relationships.

“It is really inclusive of all types of relationships, in the sense that it’s not just your typical male-female relationship,” College senior and President of Emory’s ZBT chapter Sam Broida said. “It’s sort of an all-encompassing, overarching review of how to handle any kind of relationship.”

Drew Rizzo, health promotion specialist for Emory’s Respect program, and Catherine Petersen, an employee of Counseling and Psychological Services (CAPS), were also on hand to provide counseling for any students who may have felt uncomfortable by any of the issues discussed in the program.