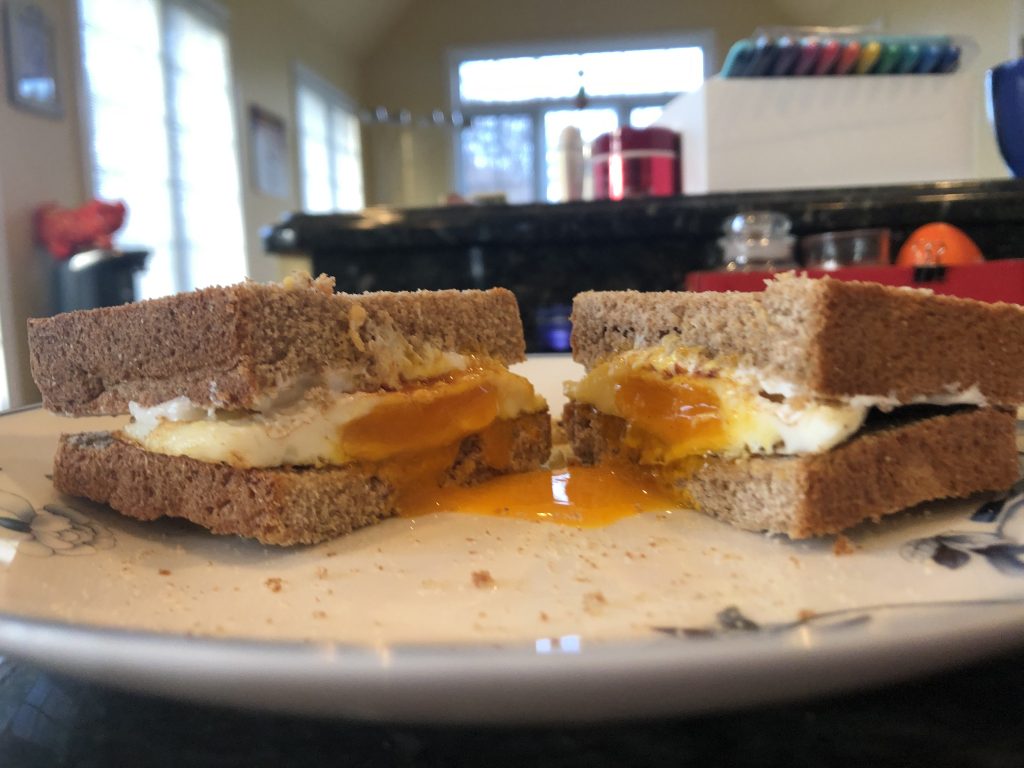 Do you prefer diagonally or horizontally cut sandwiches? Ask chefs, architects, mathematicians and home cooks and they’ll say triangles are the superior sandwich shape. But my recent bread baking endeavors inspired me to conduct my own study to determine if triangles really were better; after all, one should always remain skeptical.

From a purely aesthetic perspective, the diagonal line reigns supreme. Though physically impossible, diagonal cuts create the illusion of a larger sandwich. Architect Kevin Harris claims that cutting sandwiches diagonally exposes the interior, thus stimulating all your senses. Mathematicians have weighed in on this argument as well; some evaluated individual sandwich bites with numerical values, and others calculated the differing crustless surface areas on the types of bread.

In order to test these sandwich scholars’ reasoning, I came up with 11 categories to score my sandwiches. With the exception of two, all criteria were rated out of 10, weighted by importance.

To start, I created my breakfast sandwich riffing off of Cilbir, a Turkish dish with poached eggs on a bed of yogurt topped with spices like cayenne and smoked paprika. The study spanned three days. Why am I wasting my life on this? Because the revolutionary results will determine whether you cut your sandwiches into triangle or rectangle shapes. Once you read this, you will have an opinion either for or against me, but unconsciously, something will be nagging at you to make you rethink your decision.

Assessed with a multiplicity of two, visual appeal is arguably one of the most important factors in considering the perfect sandwich cut. You feast with your eyes and eat with your mind. The rectangle sandwich scored slightly higher because the runny egg yolk was centered perfectly in between the layers of egg white and yogurt speckled with the brightness of the paprika. On the other hand, the yolk inside the triangular sandwich was nearly destroyed when the knife sliced through, leaving most of it on the plate.

However, the triangle managed to make a comeback, because the pieces do feel substantially larger and satisfactory. While sandwiches are arguably the most versatile food, no matter the ingredients, the meal becomes substantially less appetizing when the sandwich filling soaks through the bread. Unfortunately, the yogurt, paired with the increased exposure of crustless bread in the triangle sandwich resulted in a relatively wetter sandwich half.

All of the aforementioned factors, appeal and sogginess, are determined prior to tasting. But while they are crucial to priming your tastebuds, the first bite, combined with the way a sandwich fits in your hand, sets your mindset under which a meal is consumed. For lack of better terminology, I’ve coined the first bite “wow” factor. In my Cilbir-inspired breakfast sandwich, the “wow” factor of the triangle sandwich was downright disappointing. The shape forces you to start eating from the corner, leaving me with a crusty bite of egg white, yogurt and nothing else. On the other hand, the rectangle can be bitten into from any side without the risk of ingredients staining your cheek.

While eating, I considered a few more things: the balance of ingredients, the number of crustless bites, the bite satisfaction and whether or not the sandwich can be bitten from all sides. No other food should be held to a higher standard of equality and diversity than a sandwich, because no one wants to eat 90% bread and one measly morsel of cheese. Both sandwiches scored similarly, but the triangle outperformed the rectangle in the categories of ingredients in each bite and crustless bites. What set the triangle apart was its exponential increase in flavor as I reached the middle; the succeeding crustless and well-seasoned bites elevated the bite satisfaction value.

So, now you might be asking, “What is ‘bite satisfaction?’” I’ve defined this as the immediate two-second period when a bite of food causes you to feel euphorically satisfied yet also craving more. The diverse number of ways to bite into a rectangular sandwich gave me ample chances to experience the different combinations of flavors.

But this isn’t to say that triangle sandwiches don’t have their merits. Its high double dipping ability, a vital factor to consider given sauce leakage, keeps it in contention for the superior sandwich cut. As it loses points for leakage and initial dipping capabilities due to its weak and floppy sides, the triangle sandwich can be double dipped as you take a second and third bite. On the other hand, the rectangular sandwich is crumbly and misshapen, making it difficult to even dip for the first time. Losing too much sauce detracted from taste, and it was disheartening to see the yellow streaks still dotting my plate once I had finished my sandwich.

Finally, here are the results. Out of a weighted average score of 15.2, the diagonally cut sandwich scored a 11.73, and the horizontal one just topped it at 12.42. I suspect an uproar of disagreement. Though I’ve argued a case for the horizontal cut, I must also admit the pitfalls of my sandwich assembly that played a role in the final judging. Given that the rectangular sandwich was completed on the third day, I had more practice and a better idea for the overall product. The doneness of the egg and its placement on the bread also affected the balance of ingredients and bite satisfaction.

For the most part, triangles outscored rectangles on almost all the factors analyzed by other sandwich cutting scholars, so how did it lose? Because there’s no “wow” factor of a diagonal sandwich. While it is certainly a savory sandwich, the process, the leakage and the uneven surprise bites did not fit the sandwich I had chosen to undertake the study.

But maybe there’s a more profound, philosophical question to come out of the sandwich cutting process: do triangular sandwiches beat out rectangular ones because they’re really just better, or have we all been conditioned to find evidence only to reinforce triangle sandwiches?