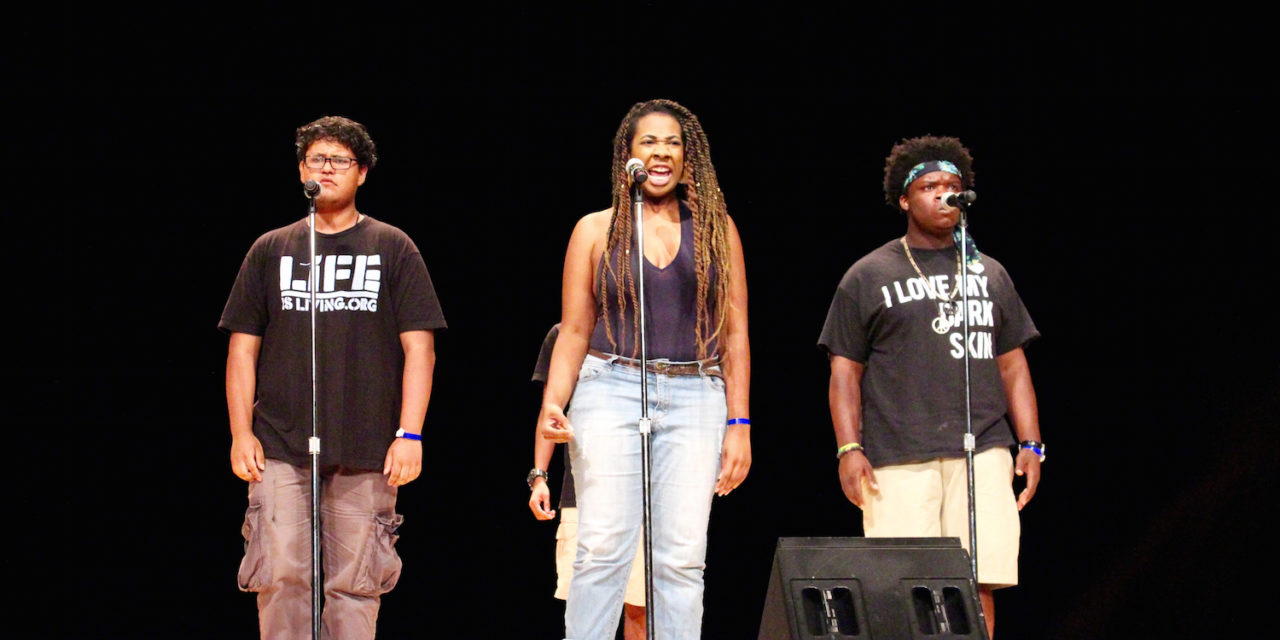 At most competitions, it’s unheard of for teams to yell at the judges to give their opponents the highest possible marks, but, at the Grand Slam Finals of Brave New Voices, competing teams stood on their chairs at Atlanta Symphony Hall and sang the praises of their opposing teams – more than once.

The 18th Annual Brave New Voices International Youth Poetry Slam Festival (BNV) was hosted at Emory University from July 15 to July 18. The festival, which aims to provide platforms for young poets and their poetry, is produced by Youth Speaks, a nonprofit organization promoting youth development by facilitating arts education and encouraging young people to become enactors of societal change.

Over 600 poets participated in events around Atlanta including workshops, community service, open mics and competed in a four round slam that culminated in the Grand Slam Finals.

At a poetry slam, poets perform original work, reciting poems in front of an audience with emphasis on the quality of both poetry and performance, competing in several rounds to determine a winner. Five judges score poets from zero to ten, dropping the lowest and highest scores. A so-called “sacrificial” poet performs at the beginning of the competition to calibrate judges’ scoring.

Each BNV team, made of up to six poets, represents a city in the competition. Although BNV began in 1998 with only four teams, the competition has grown to sixty teams from around the globe.

“We’re really about creating spaces for these young people to share their stories and tell their truths,” Hodari Davis, Youth Speak’s National Program Director and Executive Producer of BNV said. Davis gave credit to the poets, saying that the festival merely provides platforms for their work.

The opening ceremonies took place at Glenn Memorial on July 15. The ceremony included warm welcomes from festival organizers, the kickoff of Youth Speak’s “I Want to Live,” a campaign for young men of color to tell their stories about being profiled and/or brutalized by police, performances from local artist groups and, naturally, several poems.

The following day, poets began writing and performance workshops on Emory’s campus taught by top artists and educators. It finished with “Queeriosity,” a packed open mic in White Hall 208 for queer and questioning poets to perform with peers and allies in a safe space.

Competition began on Friday, with all teams participating in quarterfinals and 20 teams in semifinals, concluding with four teams in the Saturday finals.

Even once slams started, BNV stayed committed to its promise of stimulating social change.

“[The event] gives to the community,” Davis said. “It allows [the poets to] share their own presence, clean the grounds and mow the lawn, it’s their contribution to Atlanta.”

“Hopefully [poets] take more ownership and [feel] inspired by being in this area with the birth of the civil rights movement,” creative collective “WERC” co-founder Xavier Blk said. “Hopefully they’ll take what they’re seeing here and use it to fuel more passion and more proactive work.”

Blk’s hope for more socially engaging work from the poets should come true according to Associate Producer of BNV and Life is Living Jeannine Kayembe, who believes that poetry – and all art – is the “premise to action,” asserting that art “can always lead to a larger social impact.”

Even though all of the the poets are 13 to 19 years old, their poems often address current social justice issues ranging from police brutality, sexual assault, racism and gentrification.

Encouraging youth to share their stories has the power to change lives, according to Candice “Antique” Davis, a former classroom teacher and founder of “Antique Edutainment.”

“Some kids can’t afford a therapist,” she said. “The therapist is the pen and the page for them.”

The poetry can be transformative in itself, but the added experience of the festival pushes the changes further.

Atlanta’s first Youth Poet Laureate and team member Kenny Buckner described one of the most impactful moments of the festival as the love he felt at a quarterfinals after the Stockton, CA team performed a poem about eating disorders.

Buckner isn’t alone in his belief in the significance of the connection between poet and audience.

“It’s a two-way street between yourself and audience,” he continued. “It’s always been about making the world feel a little bit smaller…if somebody in the crowd can listen to your work and say, ‘You spoke to my humanity in that moment,’ or for me to be in the crowd and feel moved by something is to say that living isn’t just a lonely experience, that other people are going through the same thing you are.”

These young poets understand the power that their words can have.

“Even if it’s not my favorite piece I have to put everything I have into it,” Greensboro, NC team member Maggie Bowyer said. “It could save someone else.”

Poets did just that, giving their all onstage – particularly at the finals, where they performed to a sold-out Atlanta Symphony Hall. Denver, Philadelphia, Fort Worth and Atlanta won spots – an accomplishment not to be taken lightly according to Hodari Davis.

“The win is getting one of those four spots,” he said. “Four times [at finals] to tell your story – that’s incredible.”

The last bouts included poems about an extended metaphor about baseball and police brutality (Atlanta), gentrification and ghosts (Denver), body positivity – one that had the audience on its feet long before it ended (Fort Worth) and a celebration of blackness ending in a triumphant, Kendrick Lamar shout out “as long as we got us / and we gonna be alright!” (Philadelphia).

Standout features (non-competing poems) were a tribute to cats from Los Angeles (“You’ve cat to be kitten me right meow!”) and a poem about Islamophobia challenging the festival for being held on Eid, pointing out it would never be held on Christmas (Detroit).

Despite the outcome, the audience was repeatedly reminded “the points are not the point, the point is the poetry” – something they took to heart, yeling at the judges when they felt scores were not high enough, shouting encouragement and standing on chairs when a poem hit home.

The catchphrase rang true throughout the festival – even beyond the poetry, there was huge value placed on the community of burgeoning writers. Many poets said the cyphers (noncompetitive self-organized showcases) were a highlight of the festival.

“Ultimately it’s whom [the poets] meet,” Davis said. “It’s the relationships, it’s the hidden conversations that happen in the back of rooms or in elevators or in the hallway that are really the meat of it, that give them more inspiration to keep writing.”

Given the emphasis on the power of youth voice, the push to continue sharing is important. According to Davis, as we get older, we become more afraid – too afraid to do what youth have the courage to do.

The slams don’t end when poets pass the 19-year-old mark and head off to college. Many colleges have teams that compete in the College Unions Poetry Slam Invitational (CUPSI).

Emory’s team, Minds on Mic, competed in the past, taking fifth place in 2012, but is currently attempting to rebuild, as all members of the team have graduated.

“[Slam] is a piece of diversity that’s not as common at Emory,” Minds on Mic member Philip Winkle (15C) said, with regards to the lack of slam poetry on campus.

It wouldn’t be surprising if BNV produces some future members of an Emory team. The young poets seem to hold wisdom far beyond their years.

“What these kids are doing is uncovering all [of] these truths [and issues],” Kayembe said. “Not many people speak on them in the way these kids can.”

But perhaps this is the point – it shouldn’t be surprising that young artists hold such wisdom.

“Youth are always told they don’t have a voice or they’re always told to suppress their voice,” Founder and executive director of the nonprofit Atlanta Word Works Natalie Cook said. “Youth poetry slams allow youth to not only share their voice, but to find it.”

Cook, a BNV alumna, is a testament to the power of youth – she founded Atlanta Word Works when she was 16. A coach of the Atlanta team, she worked with poets like Buckner to hone their craft.

“Sometimes people don’t have the words for themselves,” Buckner said. “When you spit your story there might be someone in the audience [with] that same story and they didn’t know the words to use, [but] you found them and it just creates [a] bond.”

Other poets agreed with Buckner, sharing the powerful moments they felt at the festival.

“You have the ability to change lives with just words,” Greensboro team member Brandon Broadway said of the importance of poetry.

While the poets have been right about many things, Broadway is a bit off the mark with this one – the stories told by the 600 young poets are far from “just words” – they are transformative, teaching empathy, demanding social justice and giving the youth the platform to share their stories with the world.

“If Brave New Voices did not exist,” Buckner said. “So many stories would not have been told.” 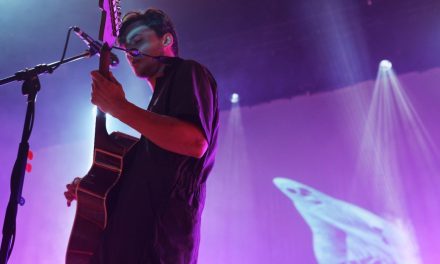 New Jersey, eccentric instruments, and a lot of gratitude: The Front Bottoms’ Brian Sella on the music-making process and return to live shows