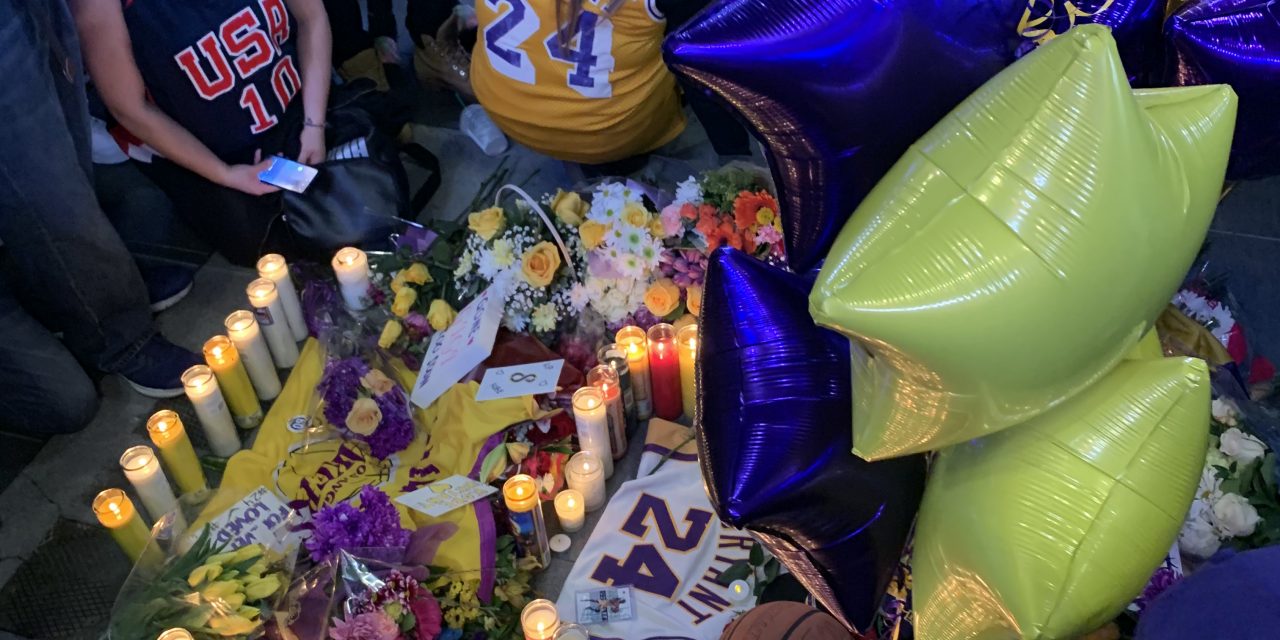 This year can’t seem to end fast enough. In the sports world, fans and organizations are also eager to flip the calendar and leave behind the devastation of the COVID-19 pandemic. Before the page turns to 2021, the Wheel took a look back at the biggest moments in professional sports this past year.

The biggest and most tragic story in sports this year was the unexpected death of Los Angeles Lakers legend Kobe Bryant. On Jan. 26, the 41-year-old Bryant, his 13-year-old daughter Gianna and seven others were killed in a helicopter crash in Calabasas, California. The nine were en route to a travel basketball game at Bryant’s Mamba Sports Academy.

Bryant is considered one of the greatest players to ever play the game of basketball. He won five NBA titles, two Olympic gold medals and was an 18-time All-Star. Bryant retired only three years ago and capped off his illustrious career with a legendary 60 points in his final game.

Gianna dreamed of playing basketball at the University of Connecticut and in the WNBA. Bryant tirelessly coached her and yearned to see her develop both on and off the court. The outpouring of support following Bryant’s death shows just how special of a player and person he was, as well as his unmatched global impact. He will forever be one of the greatest to ever play the game and the legend of his “Mamba Mentality” will forever be passed down to future generations. Rest in peace, Black Mamba.

Sports, like the rest of the world, could not avoid the wake of the coronavirus pandemic. On March 11, the NBA suspended its season after Utah Jazz All-Star Rudy Gobert tested positive for COVID-19 before their game against the Oklahoma City Thunder, a suspension that snowballed into a four-month hiatus. Other professional sports leagues eventually followed suit and indefinitely shut down.

The morning after the NBA officially called it quits, the NHL suspended its season, the UEFA Champions League canceled games and the NCAA canceled tournaments across several sports. That afternoon, the 2020 NCAA men’s and women’s postseason basketball tournaments — March Madness — were canceled entirely.

The cancellations, postponements and suspensions continued for months following March 11. The MLB paused spring training and pushed back opening day. The Masters, the most popular tournament in golf, was postponed by seven months.

The biggest postponement was the Tokyo 2020 Olympics and Paralympics. The games are now scheduled for summer 2021.

Unlike many other businesses, professional sports leagues were largely able to get back on their feet even as the pandemic raged on. While some returned during summer, they returned to arenas and stadiums without fans to minimize contact and slow the spread of the virus.

NASCAR held its first race on May 17 just over two months after sports leagues shut down. The PGA Tour followed the next month and held its first tournament in Fort Worth, Texas, from June 11 to June 14. Once individual sports like golf returned with minimal disruptions, leagues with team sports finalized their return-to-play plans.

The NBA restarted its season with 22 teams in the bubble at Walt Disney World in Orlando, Florida. The NBA’s restart plan has been the most successful of all the leagues, as no players or staff members tested positive after they initially arrived in the bubble. Isolated from the outside world for more than 100 days, the Los Angeles Lakers clinched the NBA Championship over the Miami Heat.

The MLB reimagined their schedule and had teams play teams in their region. Since the MLB season started in the middle of July, teams only played 60 games rather than the standard 180. Unlike the NBA, the MLB dealt with positive COVID-19 cases that affected their schedule. Over 40 games were canceled, and teams were forced to take disciplinary action against players that failed to abide by the MLB’s strict protocols. Despite the obstacles, the league made adjustments throughout the season and eventually crowned the Los Angeles Dodgers the World Series champions on Oct. 27, even as a Dodgers player tested positive in the middle of a game.

The reemergence and growth of the Black Lives Matter movement after George Floyd and other unarmed Black citizens were extrajudicially and prejudicially killed were felt in leagues throughout the world. Athletes protested in solidarity and demanded justice.

Bubba Wallace, a Black NASCAR driver, found a noose hanging in his garage stall in June. Although an FBI investigation found the noose was not part of a hate crime, drivers showed love and support for Wallace, walking around the racetrack with him before the race. Soon thereafter, NASCAR decided to ban the Confederate flag from races.

In the NBA bubble, teams showed their support for the movement in various ways. Clad in t-shirts and playing on courts that proclaimed “Black Lives Matter,” players displayed social justice messages on the backs of their jerseys during games.

After Jacob Blake, a Black man, was shot by a police officer in Kenosha, Wisconsin, in front of his three children at the end of August, teams took drastic action to force change. The Milwaukee Bucks boycotted Game 5 of their first-round playoff series against the Orlando Magic. Teams scheduled to play that day also decided to strike to shift attention away from basketball and onto the movement.

NBA players weren’t the only ones who used their platform to take a stand. Naomi Osaka, one of the top women’s tennis players in the world, wore a different mask that highlighted names of victims unjustly killed by police. Osaka ultimately won the 2020 U.S. Open, and her activism for the Black Lives Matter movement was widely recognized.

Although 2020 will undoubtedly be forever remembered in the annals of infamy, the Wheel’s sports team is anticipating a 2021 absent of a pandemic and instead filled with exciting sports moments and packed stands.