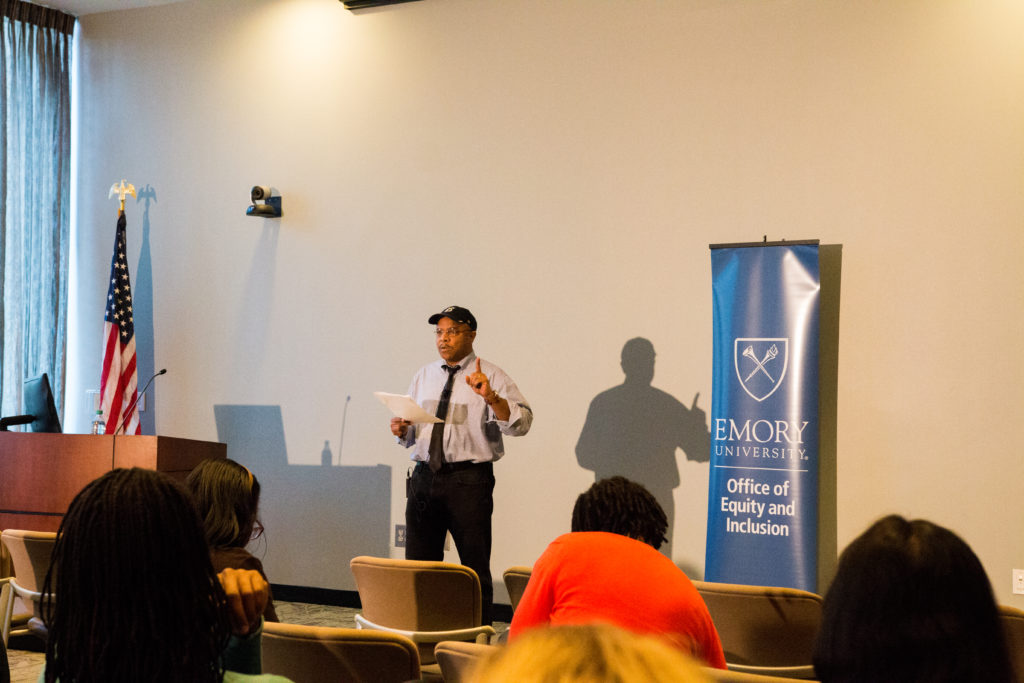 Professor of Philosophy George Yancy recommended including works from people of color in class when possible to challenge the typical all-white narrative./Parth Mody, Photo Editor

“White students at Emory have not engaged critically in the question of whiteness,” Professor of Philosophy George Yancy told about 35 faculty members at his Oct. 17 discussion “White Privilege in the Classroom.”

As part of a faculty workshop series about inclusive classrooms sponsored by the Office of Equity and Inclusion, Yancy described how he creates “dangerous spaces”— a play on the term “safe spaces”— in his classes to challenge white students to face critical questions about race, refusing to veer away from discussion surrounding the pain of minorities. Because whiteness is often considered the “norm” in society, many white students have never had to think of themselves as different or problematic, Yancy said.

The philosophy professor also urged white professors to acknowledge and reflect on their inherent racism during his discussion.

Yancy argued that white people must recognize their privilege and that their experience in the world is fundamentally different from the experience of people of color, with whom they will never truly be able to empathize. During his speech, he made references to his The New York Times op-ed, “Dear White America,” in which he calls for white people to understand their racism and what they can do to combat it.

The Times piece brought Yancy backlash in the form of death threats and name calling from both his students and the general public. Yancy affirmed in his talk that his goal is not to make white people feel guilty but rather for them to acknowledge their inherent racism and fight actively against it.

Yancy encouraged professors who don’t teach classes that focus explicitly on identity and race to look at the dynamics in their classrooms and call out implicit instances of white privilege when they see them. He also recommended including works from people of color in class when possible to challenge the typical all-white narrative.

To further illustrate his argument, Yancy compared his idea of being an anti-racist racist to sexism. Although he does not intentionally try to oppress or objectify women, he is a sexist by virtue of being a male, Yancy said.

Yancy added that he seeks to challenge his students to think about whiteness as “strange” rather than the “norm” and argued that sometimes-traumatic discussions regarding racism help break apart the narratives of white superiority. Yancy said that having difficult conversations is necessary and crucial to understanding racism and what it means to be white in America.

Associate Professor Lisa Thompson said she was eager to hear what Yancy had to say after reading his op-ed.

“It was a different from what I expected, and it was kind of mindblowing to think about,” Thompson said.

“I thought his speech was very provocative, and I resonate with a lot of the things that he said,” Yang said. “He brought up a lot of challenging topics.”

Professor of Pedagogy Arri Eisen and Professor of Philosophy John Lysaker will host the next discussion in the series, “Religion in the Classroom,” on Nov. 8.