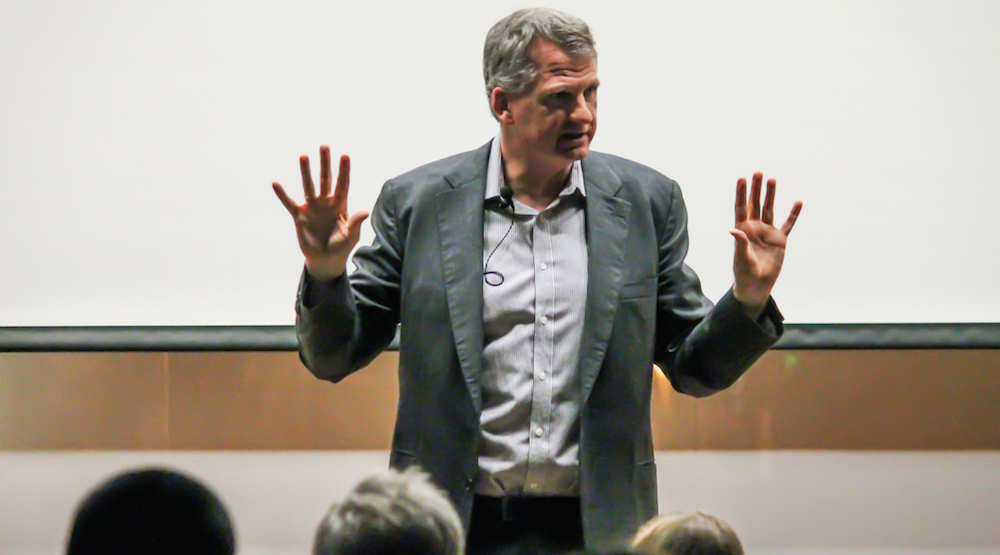 Timothy Snyder, the Yale University Bird White Housum Professor of History, delivers a lecture on the political history of the holocaust in the Oxford Presentation Room on Feb. 5. Photo by Melissa DeFrank/ Staff

A Yale University history professor shed light on the propaganda surrounding the 2014 Ukrainian Revolution and its ongoing aftermath at a lecture in White Hall on Friday evening.

Timothy Snyder, Yale’s Bird White Housum Professor of History, member of the Council on Foreign Relations and the author of five award-winning books on eastern European history, cited both historical myths and modern media portrayals in discussing how both sides view the conflict to an audience of about 100 faculty members and students.

Snyder also gave a lecture on “The Holocaust as a Political History,” sponsored by the Tam Institute for Jewish Studies, last Thursday, Feb. 5. The Friday night lecture was sponsored by Emory’s Department of Russian & East Asian Languages and Cultures, the Institute for the Liberal Arts, the Halle Institute for Global Learning and the Program in Russian & East European Studies at Emory, as well as the Jean Monnet Center for Excellence of the Sam Nunn School of International Relations at the Georgia Institute of Technology, according to a Feb 2. University press release.

After a brief run-down of Ukraine and Russia’s shared history, Snyder elucidated the origins of Moscow’s anti-Western rhetoric, often used as a means of stirring up anti-European Union (EU) sentiment and nationalism.

“All of Russian propaganda — the ‘us vs. the West’ — all of it comes from the Second World War,” Snyder said.

Despite the fact that, until the German invasion of Russia in 1941, the Soviet Union had been held in a non-aggression pact with Hitler’s Germany, the “myth” of the Soviet Union defending the eastern European states from fascism prevailed, he said.

“The Russian army is much greater than Ukraine’s … Russia’s saying, ‘we’re not fighting a war against Ukraine, we’re fighting a defensive war against the U.S.’” — Timothy Snyder

A lost sense of unity with Russia, according to Snyder, was not the only reason for the 2014 ousting of former Ukrainian President Viktor Yanukovych just after he swapped a trading agreement with Russia for one with the EU.

“The people who got together and overthrew the government were Russian speakers — not all of them, but many,” he said, describing the rebel group known as the Maidan as more economically-minded than anti-Russian.

“When you’re a little guy or gal in this system you’ll bump up against the ceiling very quickly,” Snyder said.
Beyond a “slippage” of historical ties, the growing political distance between Russia and Ukraine had more modern reasons, Snyder said, such as Moscow’s portrayal of Yanukovych’s opponents.

The anti-European sentiment, he added, was accompanied by an abhorrence of “Western decadence,” which the Russian media has long portrayed as a threat to eastern European culture. Russia’s forming a retaliation against the opposition group, painted as an ardent supporter of the EU, meant attracting far-right, anti-EU political party allies in Europe, such as the Front National in France and the National Democratic Party in Germany, according to Snyder.

As for its more direct battles with Ukraine, he remarked on Russia’s unusual use of “asymmetric warfare,” in which the warring nation in question doesn’t declare war and sends unmarked troops to the front lines. Russia’s tactics, Snyder said, are “a kind of reverse asymmetry.”

“The Russian army is much greater than Ukraine’s. Russia’s state is much greater than Ukraine’s. Russia’s saying, ‘we’re not fighting a war against Ukraine, we’re fighting a defensive war against the U.S.,’ and that’s why the U.S. feels that it has the right to get involved,” he said. “That’s why the U.S. finds itself involved in a war along with Ukraine.”

Snyder’s lecture came as U.S. Secretary of State John Kerry proposed to arm the Ukrainian forces, at a meeting with other world leaders in the country last Sunday. Throughout his talk, Snyder drew on similarities between Russia and its indirect opponent, the U.S.

As a final example of Russia’s propaganda machine, Snyder discussed the Russian troops’ deadly missile strike on Malaysia Flight MH17 in July. A favorite theory of Moscow’s, he said, alleged that the U.S. had taken the missing Malaysia Flight MH370, filled it with corpses and shot it down near the Russian-Ukrainian border as a way to turn the world’s anger on Russian President Vladimir Putin.

Still, Snyder said, the commercial airline shouldn’t have flown over the area to begin with.

“At some level, we knew this,” he said. “Those people died because we refused to understand things that lay right before our eyes.”

The lecture was followed by a question and answer session, in which many of the more than 100 audience members asked about Putin’s plans and motivations, as well as his economic and diplomatic needs.

Snyder, though hesitant to predict the next moves of the leader who unexpectedly annexed the Ukrainian peninsula of Crimea, said that Putin needed to cut a deal with the EU to avoid further diplomatic alienation and economic downfall, rather than “get on his knees [before] China.”

The U.S.’s future role, Snyder said, should be to help the Ukrainians establish a functioning state, rather than to simply supply their troops with weapons and continue a proxy war against Russia.

“We haven’t done anything to win this war, and that’s what makes us similar to Russia,” he said of the U.S.

Goizueta Business School sophomore Omar Shihadeh, who said he attended the lecture to earn extra credit for a class, said that the lecture piqued his interested in a global issue he hadn’t given much thought to before.

“It was interesting how the point of [Russia’s] propaganda made it seem like they’re trying to appeal to every different audience, which is contradictory,” Shihadeh said. He added that he wished Snyder had mentioned Russia’s recent demand for war reparations from Germany, even as the professor emphasized World War II as a major event solidifying Ukraine’s ties to Russia.

Irina Levterova, a Ukrainian national and Georgia State University graduate, said she had enjoyed seeing a new perspective of the crisis in her home country. A Kiev native, Levterova said she was not in Ukraine for the more recent revolution, but witnessed the Orange Revolution, which was also a demonstration in opposition to Yanukovych, in 2004.

“He really put into long-term perspective the strategy of Russia,” she said, adding that she had normally heard that Putin’s central goal was to take more Ukrainian territory, just as he took Crimea. “[Snyder] talks about it as a way to destroy the Ukrainian state.”