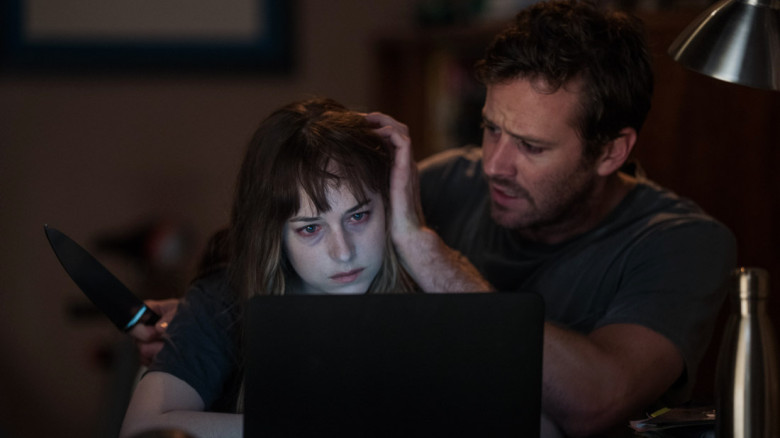 The 2019 psychological horror film “Wounds” opens with a quote from Joseph Conrad’s “Heart of Darkness”: “It had whispered to him things about himself which he did not know, things of which he had no conception.” The opening is meant to convince viewers that the film contains a deep, critical analysis of madness, but it proves ineffective as audiences are left with a film that lacks coherence as much as it lacks an enticing narrative.

“Wounds,” directed by Babak Anvari and based on a novella by Nathan Ballingrud, premiered at the 2019 Sundance Film Festival and was later bought by Hulu. It tells the story of Will (Armie Hammer), a Louisiania bartender who begins experiencing supernatural events after finding a phone left in his bar. Due to the disturbing messages and creepy photos on the phone, the relationships with his girlfriend Carrie (Dakota Johnson) and his secret lover Alicia (Zazie Beetz) begin to fall apart.

The most striking thing about “Wounds” is how unnatural the dialogue feels. Character interactions do not seem realistic but rather seem like the actors are reading off a script because of the characters’ apathetic emotional responses. The dull line delivery is best exemplified by interactions between Hammer and Johnson. While the two are supposed to be the leading couple, it is hard to differentiate any specific emotions portrayed between their facial expressions, which makes their relationship feel inorganic. The first interaction between Hammer and Johnson shows the duo having breakfast, during which the couple spends a majority of the meal either arguing or acting indifferent toward each other. It is tough to tell if the lack of character development issue is bad acting or a poorly written and unstructured script.

In fact, Beetz steals the show with her wit and injects a variety of emotions into the portrayal of Alicia. All characters except for Alicia are unlikable, which dooms an already struggling film. While horror and thriller films have had their fair share of unlikable character groups, the idea of them being hated often plays a part in the story. Take, for instance, the “Final Destination” franchise; every movie has a group of characters that have obnoxious personalities and because of these temperaments are killed off, fueling the narrative. In “Wounds,” making all the characters unappealing does nothing to service the story. While the movie means to portray Will’s descent into madness, there is no evidence of his moral goodness beforehand. “Wounds” makes it feel as though Will has consistently had chaotic energy, building up to an unsatisfying ending.

One of the most frustrating things about the film is that it does little to engage with its Louisiana setting. The state is full of pre-existing folklore and urban legends that would have produced a narrative with more charisma than a possessed phone that conjures cockroaches. In fact, if Anvari wanted to keep with the theme of ghosts and bars, he could have used the story of the Spanish Moon bar as a starting point. It feels as if he is doing a disservice to Louisiana by ignoring the mystical and spooky potential of the area.

Given the phone acts as an underlying mechanism for the supernatural events of the film, it would make sense if the movie included a message related to technology. However, the message is nothing new, simply reiterating the tired idea that people use their phones too much. This concept is best observed when Hammer is laying on the ground and a group of people surround him to record him with their phones, displaying the depravity of society. Whether or not this idea is true, Anvari did an adequate job at incorporating it into his movie.

“Wounds” cinematographic style is a hit-or-miss mix of well-planned scenes and bland sequences. Some scenes had stellar shots. During an impressive moment, Will eats a sandwich with the antagonists sitting far behind him only being slightly visible to the audience. There is also a short, continuous scene where our protagonist walks down a hallway and the camera spins to the right, open door and then to the left. This camera technique provides an interesting way of grasping a deeper understanding of Will’s personality through displaying military paraphernalia and an overall messy apartment. On the other hand, some shots feel like they go on for too long or are too repetitive. For example, there are at least four separate scenes of Will pulling a beer out of the fridge. While viewers can analyze this as a portrayal of Will’s character, it shows a lack of creativity on the filmmakers’ parts.

While anyone can watch “Wounds” through Hulu, be warned of the careless storyline and bland leading performances by Johnson and Hammer. The unsatisfying conclusion will leave some viewers wanting more, while others will be thankful that the eternal hour-and-a-half film is over.