Now before I begin, let me make it clear that I am by no means dissatisfied with my current housing situation or roommate – after all, I live in Longstreet-Means, where champions reside. However, in the light of the freshman spirit of adventure and enterprise, I had to determine the quality of other options available to me.

Woodruff library loomed monolithically above me as I began the trek there from my dorm, a few dark clouds, singed by a fast-dying sun, scooted unhurried and undaunted over all. I tucked my sleeping bag tighter under my arm and thought about the homework I had still to finish.

Thinking it would be suspicious to enter the library with all my stuff at once, I stashed the sleeping bag outside and went in with my guitar and backpack. The guard looked up with a little wonderment, cracked a joke about my guitar case being a gun case, which he would have to confiscate, then let me through without further hassle. I later snuck back to retrieve my sleeping bag.

My first campsite was the stack on floor six. I tried the study lounges first, but finding them locked, I returned to the lobbies next to the elevator. The one on the sixth floor being a study sanctuary to several students, I decided to try the floor below, which was empty. I finished my homework, and was skyping my parents when the intercom announced the closing of the stacks. I gathered my things and moved to the first floor, where I found less privacy than I had hoped to.

I chose a corner behind the enclosed staircase, and set out my sleeping bag and blanket. After finding a curious friend and leading her to my makeshift lair, we talked for a while and listened to some of Sea Wolf’s latest album, Old World Romance – quietly, of course –  since it is the library.

The silence, save for the droning of the fluorescent lights, being oppressive, I took out my guitar and began to pluck passionately, trying to relieve the anxiousness lent by the fervent rustling of textbooks. Halfway into the piece, someone politely asked me to stop, though she added that it was pretty.

Feeling stupid, I stowed my guitar and rested my chin on my folded hands. My cheeks flushed at my embarrassment. Time for bed, I decided.

It took me a while to get comfortable, after situating my belongings such that my body prevented them from being stolen. I had to drape my blanket over my eyes in order to tame the glare of the lights overhead, but as soon as the white blaze became a softened red, I drifted off into lala land.

I awoke at four o’clock for no reason in particular. I checked my belongings and vital signs, then realized that I was laying across the hall so that no one could pass by. I rolled back  into my previous place and drifted off again.

At six, a gentle kick woke me up. It was security.

“The staff is coming. You’re going to have to leave.”

I mumbled assent and quickly drifted back to sleep. Five more minutes mom. The process was repeated once more before I gathered my things and sat on the study sofa. After a minute, I assumed the guard’s shift had ended, and once again went back to sleep, content that I could sleep until my first class at 9:30. Not so. At about eight the sofa trembled from a not so gentle blow.

“This is the last time, kid. We’ve been tolerant, but this isn’t your dormitory. Leave.”

I felt bad, and left in a hurry. Breakfast there would have been expensive, though the smell was tantalizing. There was no time for a shower, though I had looked forward to testing the library’s. I exited the building with no small feeling of satisfaction, and strode with confidence to my first class.

Jonathan Warkentine is a College freshman from Almaty, Kazakhstan. 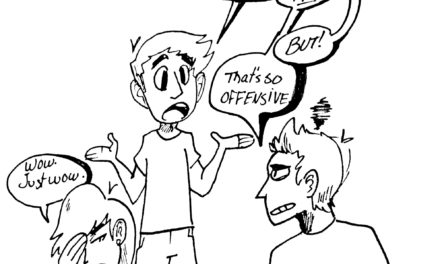 The Election’s Not Over Yet. Brace Yourselves.

The Hard Reality of Disproportion