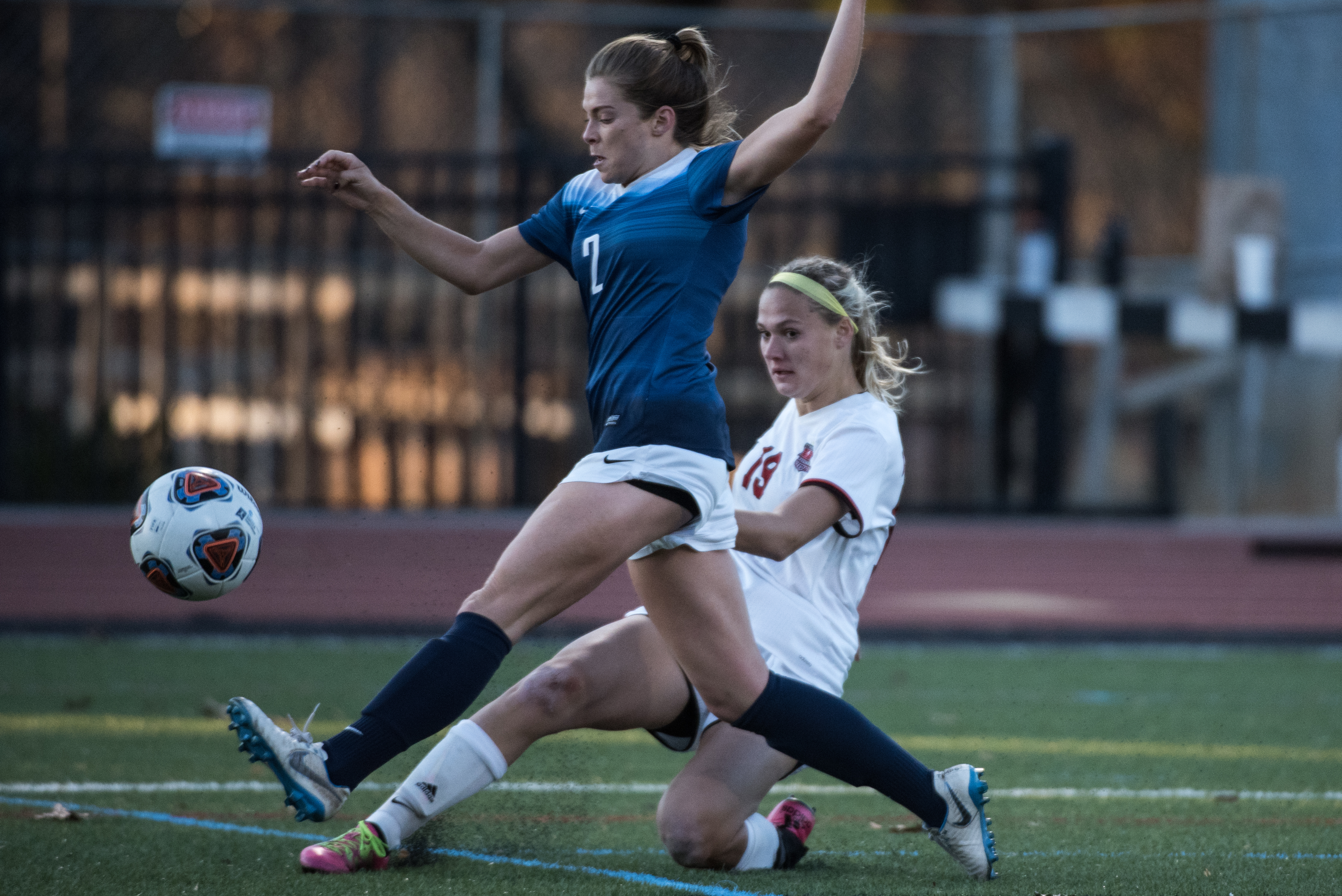 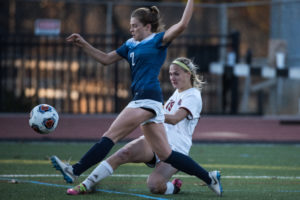 Senior defender Nikki Batt lunges for the ball in a match against the University of Lynchburg (Va.) on Nov. 10. The Eagles made their first appearance in five years in the NCAA D-III Women’s Soccer Championships this weekend. Courtesy of Hannah Grasberger/Lynchburg Athletics

The No. 22 Emory women’s soccer team kicked off its first post-season run since 2013 on Nov. 10 and 11 in the first and second rounds of the NCAA Division III Women’s Soccer Championships hosted by the University of Lynchburg (Va.). In the first round, the Eagles came out on top against the Pennsylvania State University-Berks (PSU) Nittany Lions 1-0, but suffered a heartbreaking loss in the second round against Lynchburg 2-0.

In the first round match against PSU-Berks, the Eagles and Nittany Lions faced off in a dramatic back-and-forth battle.

After a scoreless first half, the Eagles had three goal opportunities in the 77th minute of the second half, but they were unsuccessful in driving any home. Sophomore midfielder Samantha Hilsee’s first chance was stopped on a kick save by PSU sophomore goalkeeper Bristol Pizzuto before senior forward Sophia Dillon’s rebound ricocheted off the crossbar. Just seconds later, sophomore defender Caroline Moore threatened PSU-Berks with a header that was saved by Pizzuto.

Senior goalkeeper Dani Staffin closed out the game with 11 saves, her career second-best and fourth clean sheet of the season. Four of her saves came during the final five minutes of regulation, keeping the Nittany Lions scoreless and sending the game into overtime.

Just two minutes and seven seconds into the first overtime period, senior forward Abbe McCarter fired a shot from the right side of the 18 and buried the ball into the left corner of the net, chalking up the first and only goal of the match and sending the Eagles to the Round of 32. The game-winner was McCarter’s team-leading fourth and fifth overall goal of the season.

“I remember stepping on the field, just hoping as a senior that it wasn’t about to be my last time ever playing,” McCarter said. “I knew that we had such a special team, and we had all worked so hard to get here, and we definitely deserved to make it past the first round. It was more after the goal that all of it hit me, how much had been riding on that moment.”

The Eagles led the match in shots 24-21, but PSU-Berks had an 11-9 edge on shots on goal. The victory extended Emory’s win streak to eight games and boosted their overall record to 14-4-1.

In the second-round match against No.17 Lynchburg, the Hornets controlled possession throughout the first half, outshooting the Eagles 10-2. In the 37th minute, senior forward Caitlin Mertens dished the ball to junior forward Alyssa Rudy inside the box, allowing Rudy to bury the ball into the lower left corner.

In the second half, the Eagles retaliated, applying heavy pressure up front. In the 46th minute, junior forward Caroline Kolski recorded Emory’s first scoring opportunity with a shot from the top of the 18, which Lynchburg goalkeeper Delia LoSapio deflected. In the 53rd minute, Darius rocketed a shot off a corner kick which LoSapio once again stopped. 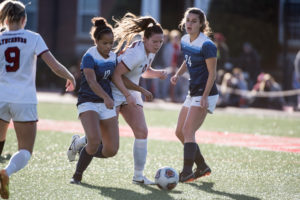 The Hornets sealed the Eagles’ fate in the 87th minute when the Eagles turned the ball over to Lynchburg senior forward Emily Sanchez who beat out the Eagle defense and finished to the top left corner.

“I think we were on our heels in the first half, but came out in the second with more energy,” Head Coach Sue Patberg said. “We got a lot of chances, and we put on so much more pressure and kept them in their half for a majority of the time.”

“We had a really accomplishing season this year, and it felt great to get back into the tournament,” junior defender Paige Santee said. “Every person on the team stepped up to a higher level, every training session and every game. The energy on our team was unlike previous years, and I can only see it getting better in the future.” 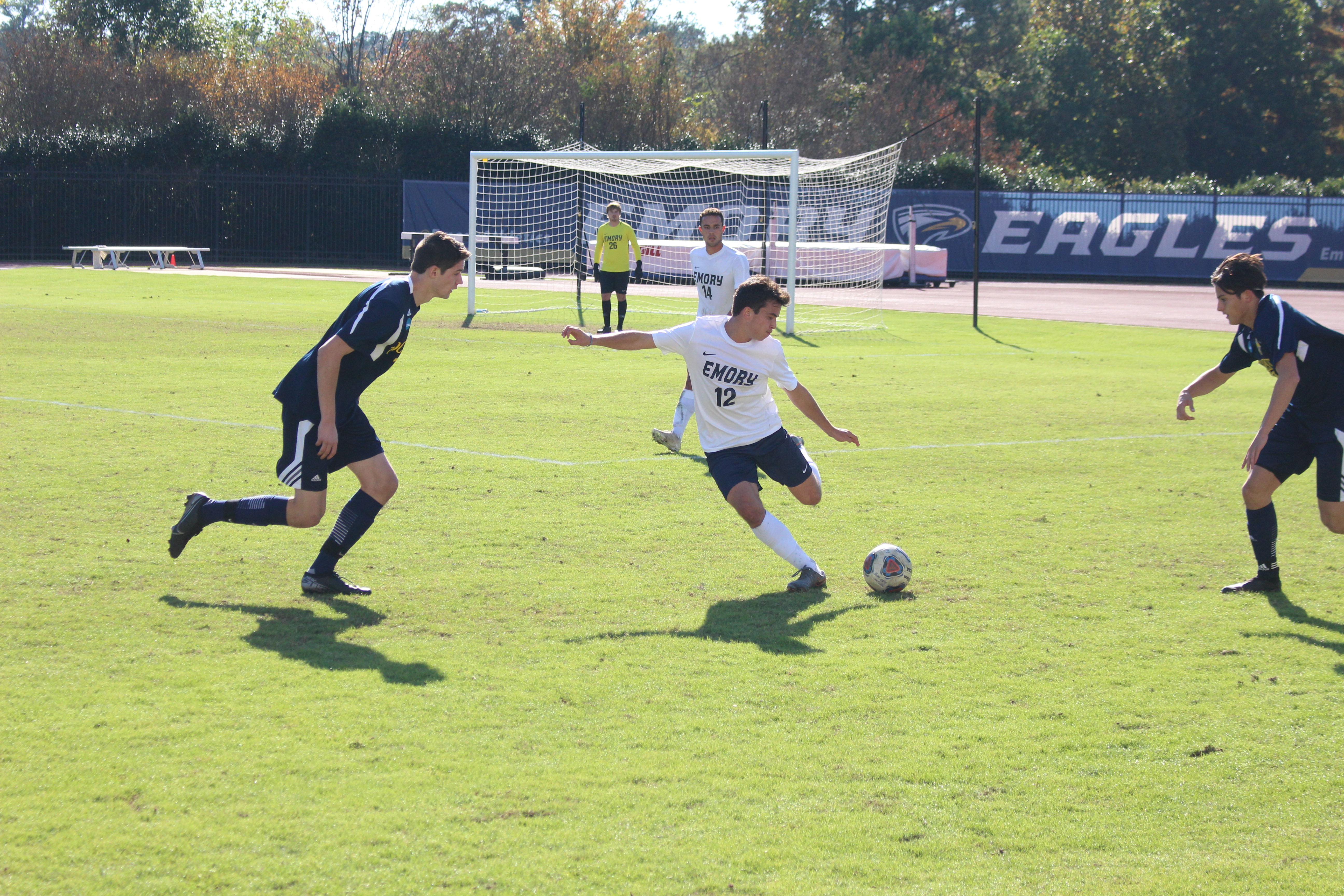