Women’s Soccer Wins a Pair Over the Weekend 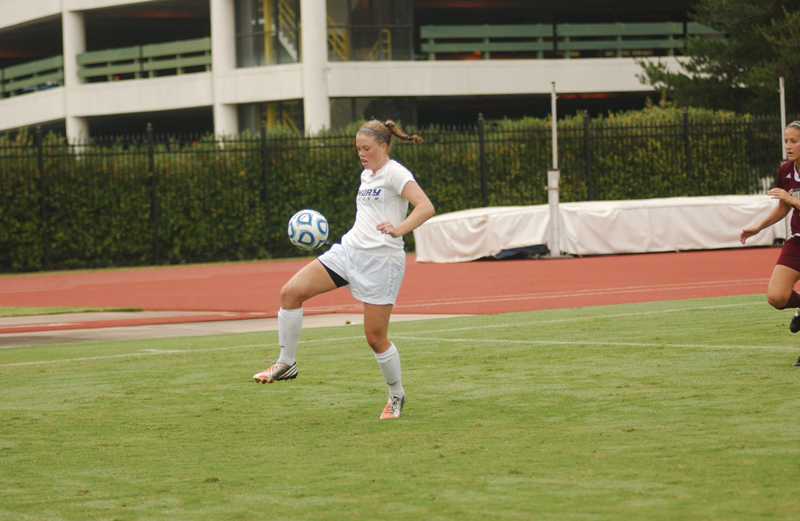 The women’s soccer team triumphed over Rhodes College (Tenn.) and Centre College (Ky.) to extend their home winning streak to an impressive 27 games. On Saturday, the squad won 5-0 against Rhodes and continued their efforts on Sunday, beating Centre in a 3-1 match.

“In previous games during the season, we’ve had a difficult time finding the back of the net, but this weekend we scored a total of 8 goals,” Head Coach Sue Patberg said.

Within the first 15 minutes of play, junior forward Charlotte Butker established the aggressive offense when she scored the first goal of the day. Soon after, freshman forward Cristina Ramirez followed up with a goal before the conclusion of the first half.

Emory finished the half with a total of 18 shots, while Rhodes attempted just a single shot. The score remained 2-0 as the game entered its second frame of play.

The Eagles did not let up after halftime. Senior forward Veronica Romero added a goal to the lead after taking the ball to the net unassisted within the first two minutes of the second half.

Butker contributed another goal during the 55th minute of play after receiving assists from Romero and junior midfielder Claudia Rowe.

The Eagles led 4-0 in the match, but maintained their offensive mindset up until the final minute of the game. In the last series, senior center-midfielder Samantha Bleiweis assisted junior forward Karina Rodriguez for the final shot and goal of the game, fastening the score at 5-0. The goal marked Bleiweis’ first assist of her career and Rodriguez’s first goal of the season.

In total, Emory outshot Rhodes 36-5, additionally leading 15-0 in shots on goal. Sophomore goalkeeper Liz Arnold and junior goalkeeper Gabrielle Pelura split time in net to maintain a shutout throughout the game. Together, Arnold and Pelura engineered the Eagles’ third-straight shutout, and fourth shutout overall in the season.

In their following game, Emory took on Centre. The win buffered the Eagles’ record to 7-2-1.

Emory had possession of the ball for the majority of the first half, with 13 shots to show against none for Centre.

With only a minute left of play in the first half, senior defender Lauren Drosick was able to gain possession of the ball in her own defensive end and advance it all the way down to the opposite end of the field. As she reached Centre’s 18-yard box, she found Rodriguez, who finished the play, firing a shot into the lower right corner of the net.

This goal marked Rodriguez’s second goal of the season, and put Emory in the lead as the first half concluded. Scoring with seconds left in the half was no new feat for Rodriguez, who the day before also scored with 35 seconds left in a half.

As the second half unfolded, Centre was able to quickly answer Emory’s lead. After Arnold made a save, the Colonels controlled the rebound and proceeded to shoot and score off the play to tie the game at 1-1.

Almost 20 minutes later, the Eagles took back the lead off of a corner kick. Rodriguez took the kick to find senior center-midfielder Kelly Costopoulos, who then redirected the ball for junior center-midfielder/forward Meredith Doherty. Doherty eventually found the back of the net for the first goal of her career.

Six minutes later, Rodriguez again converted a corner kick into a scoring opportunity when she assisted sophomore midfielder Jordan Morell. This counted as Rodriguez’s second assist for the day and Morell’s first goal of the season.

The score stood at 3-1 for the rest of the game. Emory totaled 37 shots to Centre’s five, including an 18-2 shots-on-goal advantage in favor of the Eagles. In their two weekend home wins, the Eagles recorded a total of 73 shots over their opponents’ combined 10 shots.

“It was a good game because it was the first time that our opponent came back after we scored the first goal,” Patberg said after the win.

Next, the Eagles will host their first University Athletic Association game of the season when they face off against third-ranked rival Washington University in St. Louis (Mo.) at home on Oct. 6 at 1:30 p.m.