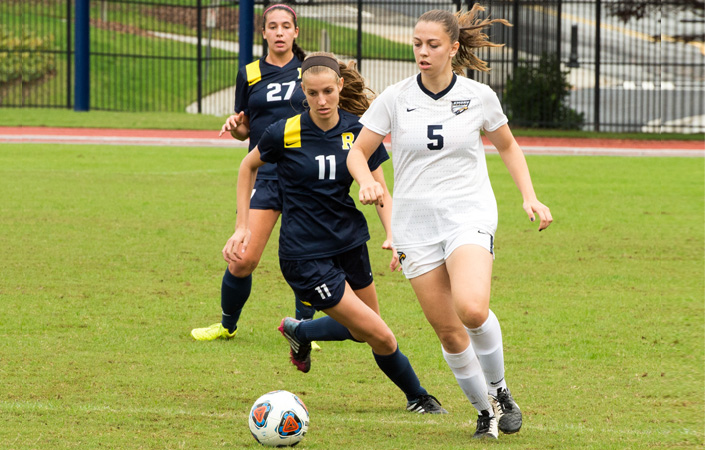 Their contribution was not logged onto the final box score, but consider the Emory swimming and diving team’s cheering a factor in women’s soccer’s 2-0 win over the University of Chicago (Ill.) on Saturday.

The Eagles handed the fourth ranked UChicago Maroons their first loss of the season, kicking off University Athletic Association (UAA) conference play with a decisive victory over a team Emory had not beaten since 2013. The win improved the Eagles’ record to 6-3 on the season and increased the team’s win streak to four.

“We knew [the Maroons] were good and strong,” senior striker Cristina Ramirez said. “But, we also knew we could beat them if we worked hard.”

The two sides have played some contentious games in the past, which showed on the pitch Saturday. In two of the last three matchups between the Maroons and the Eagles, an Emory player had to leave the game “on crutches.”

“We have had a bad history with them,” Ramirez added.

Both UChicago and Emory had great chances in the first 20 minutes of the match, but neither team managed to get on the scoreboard.

The tide changed after the Eagles received a huge morale boost from the Emory swimming and diving team. The team stormed out of the Woodruff Physical Education Center (WoodPEC) and into the stands, dripping wet, carrying kickboards and clad in bathing suits from their morning practice. The team dove into a well-rehearsed chant, making enough noise to attract curious onlookers strolling past the soccer field. Their school spirit got the 123-person crowd  pumped up and joining in on the action.

Only minutes after the swim team’s display of school spirit, Ramirez scored from close range with the help of a beautiful assist from sophomore defender Nikki Batt. Emory took the lead 1-0 at the 21-minute mark.

“I felt the momentum switch, and [then] we scored,” said Ramirez, who led the team with six shots out of the team’s 18 overall. “We love it when [the swimming and diving team] do[es] that.”

At the half, Emory had taken twice as many shots as their opponent — 8-4.

Strong defenses on both sides of the field prevented the offenses from scoring in the second half until, in the 86th minute, freshman forward Caroline Kolski fired a shot past the outstretched arms of UChicago’s goalkeeper, sealing the game and the final score in favor of the Eagles.

Head Coach Sue Patberg thought her team rose to the occasion on the challenges they faced against UChicago, which she said is “always a hard-fought match.”

She thought the entire team played well, but that the defense did an especially good job containing who she felt was the Maroons’ best player — sophomore midfielder Jenna McKinney.

The Eagles will play next when they hit the road to take on Washington University in St. Louis (Mo.) Saturday, Oct. 8.

“Playing Wash. U at Wash. U is always tough,” Patberg said. “And it is one that we are really excited about.”