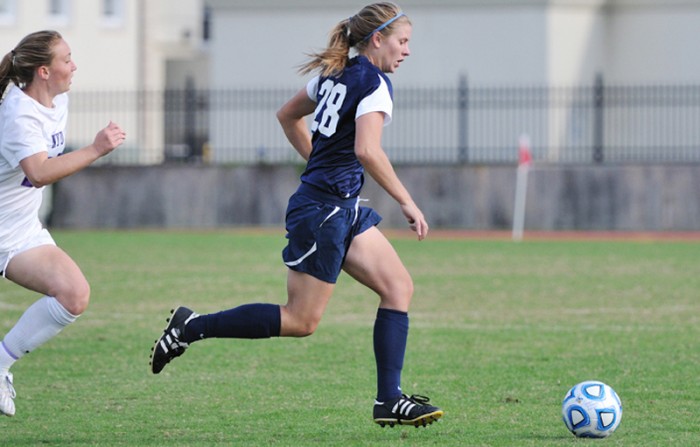 Last weekend, the women’s soccer team swept a pair of in-conference opponents, New York University (NYU) Violets and Brandeis University Judges. The Eagles topped NYU 2-1 before completing the weekend by defeating Brandeis 3-0. The Eagles propelled their University Athletic Association (UAA) record to 3-1-0 as well as their overall record to 10-3-1, maintaining their number-two spot in UAA, only three points behind rival Washington University in St. Louis (Mo.).

The Eagles kicked off the weekend with their match against NYU on Friday, where they established a lead early on when senior center-midfielder Kelly Costopoulos scored during the second minute of play. The scoring opportunity for Costopoulos arose when junior forward Charlotte Butker took a shot on goal that rebounded off the post. Costopoulos followed up the rebound with a shot that sent the ball straight to the back of the net. The goal counted for Costopoulos’ team leading fourth of the season and Butker’s second assist of the year.

Yet only 10 minutes later, NYU answered with a game-tying goal. NYU forward Melissa Menta pursued a one-on-one opportunity that ended with a shot that passed by Emory’s sophomore goalkeeper Liz Arnold.

Scoreless play between the Eagles and Violets continued until the 31st minute when senior defender Lauren Drosick put Emory back on top, where they would remain for the rest of the game. Drosick took possession of the ball at midfield, where she then continued to advance down the field until she reached the opposite-side 18-yard box. Dodging two defenders, Drosick furthered her unassisted rush to goal, which ended successfully as Drosick nailed the ball into the far side of the net. This was Drosick’s first career goal.

The score remained 2-1 for the rest of the match, where the Eagles maintained a defensive mindset with no shots allowed for the Violets during the second half of play. In total, Emory finished with 24 shots on goal versus NYU’s three shots.

Two days later, Emory again proved victorious on the field in their game against Brandeis on Sunday. Although the final score shows a decisive 3-0 win in favor of Emory, it was a close match-up, with a scoreless first half to show. The Eagles outshot the Judges 12-3 during the first half of play, yet the score remained tied at 0-0.

As the second half unveiled, the game remained tied until the Eagles were given a corner kick. With this opportunity, Butker was able to find senior center-midfielder Clare Mullins in the six-yard box who finished the play with a shot into the upper corner of the net. The score now stood at 1-0 in favor of the Eagles. The Eagles did not let up. Later on in the second half, freshman forward Cristina Ramirez received a pass from senior defender Lauren Gorodetsky that Ramirez was able to control to eventually push the ball past Brandeis’ goalkeeper. This counted for Ramirez’s team leading fourth goal of the season and Gorodetsky’s first season assist.

The Eagles were able to cap off the win with a third and final goal during the 89th minute when junior forward Karina Rodriguez scored her third goal of the season. In the time span of four seconds, Rodriguez attempted a total of three shots on Brandeis’ goalkeeper, two of which the goalie was able to ward off, until Rodriguez was finally able to persevere with her final shot.

In total, the Eagles outshot the Judges 33-8. Among those 33 shots, 17 were on goal, which attributed to Emory’s second-highest record of the year. The Eagles also finished with a season-high of 11 corner kicks against Brandeis. Arnold contributed to the defensive shutout, which marked the sixth of the season.

Emory will host Agnes Scott College in a mid-week match up taking place on Wednesday, Oct. 23 at 7:00 p.m.