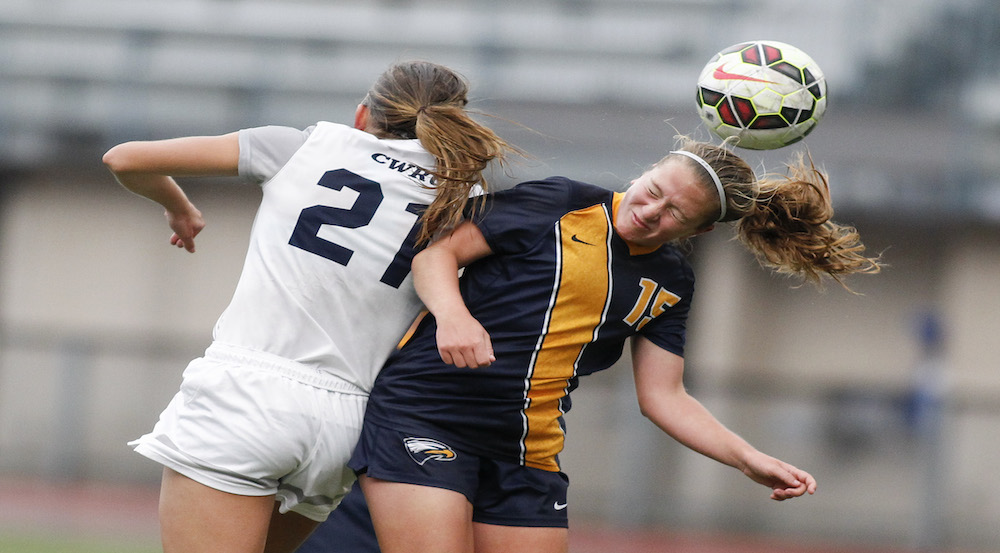 The Emory Women’s soccer team played a scoreless game against No. 23-ranked Case Western Reserve University in 110 minutes of play on Friday night.

While the Eagles maintained a dominant hold of the ball throughout the match and had several shots at the goal, team members were unable to hit the back of the net.

“I thought the Case game was a really competitive and hard fought game for us,” freshman forward Grace Edgarton said. “We played with intensity all the way through double overtime.”

Emory outshot Case Western 12-2 in the second half and 4-3 in both overtime periods.

The Eagles had a number of shots on the goal in the second half of the game, including a promising shot from junior forward Cristina Ramirez in the 64th minute. However, Case Western junior goalkeeper Megan Romelfanger saved the shot at the last minute.

Shortly after, sophomore forward Kaitlyn Dorka sent a shot sailing just above the top corner of the net.

The Romelfanger came out swinging with another save in the 78th minute from a close range shot from Edgarton. Another close range opportunity came just 8 minutes later when Dorka shot from inside the 18-yard box, but Romelfanger yet again made a save.

By the end of the regulation period, the game was still a draw, and Emory goalkeeper senior Liz Arnold held her own, blocking a couple of attempts from the Spartans.

“Our defense and goalkeeper made some huge saves for us keeping us on the game,” Edgarton said.

While the first overtime period did not bring any significant scoring opportunities, sophomore center midfielder Melissa Ardizzone had a shot in the 104th minute and another in the 109th minute.

Ardizzone caught a loose ball in the 6-yard box but it was barely saved by the Spartans’ goalkeeper. The second shot tumbled past multiple defenders and ultimately skidded too far wide on the right amidst the wet conditions.

“This game was a little crazy because it hailed during some of the game, and a layer of hail covered the field,” Edgarton said.

Overall, the Eagles outshot Case Western 19-7, with a 7-5 lead in shots on the goal.

“Although I’m only a freshman and don’t know too much about our upcoming opponents, I think our team is talented and strong enough to win the remaining games and possibly get a shot at the [UAA] tournament, Edgarton said.

Like the Case Western game, the game against Carnegie Mellon went into a second overtime, and the only goal of the game was scored with six seconds left in the game.

The winning goal came as junior Hannah Meyer, past Arnold as she tried to save it.

While the Eagles fell to Carnegie Mellon, they put up a good defensive fight against the highest scoring UAA team. Arnold performed well during the game against Case Western and made some important saves against Carnegie Mellon; however, the last goal fell through the cracks.

Carnegie Mellon outshot Emory 11-4 during the game, and the team dominated possession of the ball throughout despite the Eagles’ good faith effort to score a goal in the second half.
The final non-conference match of the Eagles’ season will be against Division I team Kennesaw State on October 27.