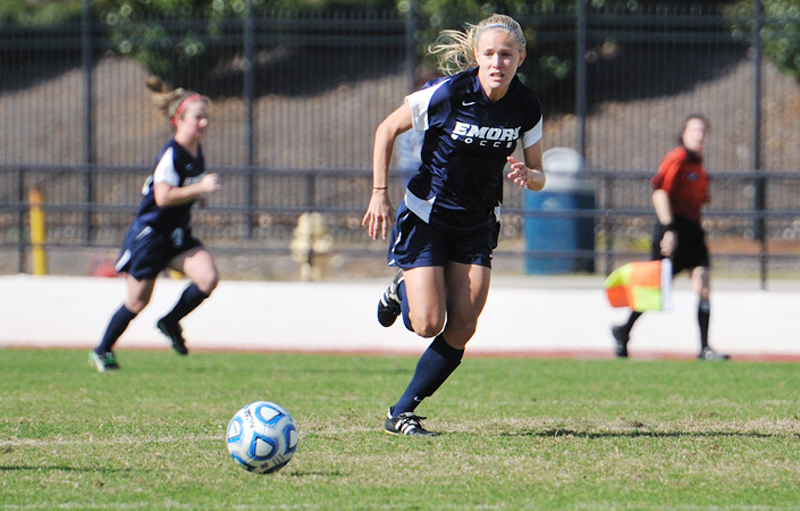 During the weekend, the women’s soccer team played two close matches that lengthened Emory’s winning streak to an impressive six wins. The squad combined for a total of three goals in the course of their two away games, beating the University of Rochester (N.Y.) Yellowjackets 2-0 and the Case Western Reserve University (Ohio) Spartans 1-0. The Eagles have won 12 of their last 13 games and are now 13-3-1 on the season.

In their road game against University of Rochester, Emory initially saw few scoring opportunities and suffered a scoreless first half. However, the Eagles were still able to register a total of five shots to the Yellowjackets’ single shot during the first frame of play.

With the second half underway, the Eagles were able to take the lead when sophomore midfielder Jordan Morell controlled the ball inside the box and sent it soaring into the far side of the net for the first goal of the day. This marked Morell’s fifth goal and 12th point of the season.

Only eight minutes later, junior forward Charlotte Butker added another goal to extend the Eagles’ lead to 2-0. Butker received the ball and fired a shot from 25 yards away. The ball hit off the bottom of the crossbar before heading into the back of the net. It was her first goal on the season.

Emory’s defense only allowed Rochester two shots during the game, with only one shot being on goal, securing the win late in the second half.

The Eagles extended their winning streak in another tight away game against Case Western that ended 1-0 in favor of Emory.

Emory was once again held scoreless during the first half. After holding possession of the ball for a majority of the second half, the Eagles were finally able to take advantage of a scoring opportunity when senior center midfielder Kelly Costopoulos found the back of the net for her fifth goal of the season. The play leading up to the goal was ignited when junior forward Emily Feldman advanced the ball down the field to find junior center midfielder Jennifer Grant. Grant was able to cross the ball to Costopoulos who finished the play with a game-winning goal. This counted for Costopoulos’ 11th game-winning goal of her career, which placed her in third place in school history.

The Eagles still have a chance at tying Washington University in St. Louis (Mo.) for the University Athletic Association (UAA) title if Emory defeats Carnegie Mellon University (Pa.) and if Wash. U falls to Chicago during the next week of play.

Emory will host Carnegie Mellon on Saturday, Nov. 9 at 1:30 p.m. The squad will honor its seven graduating seniors during the annual “Senior Day” ceremony prior to the game.