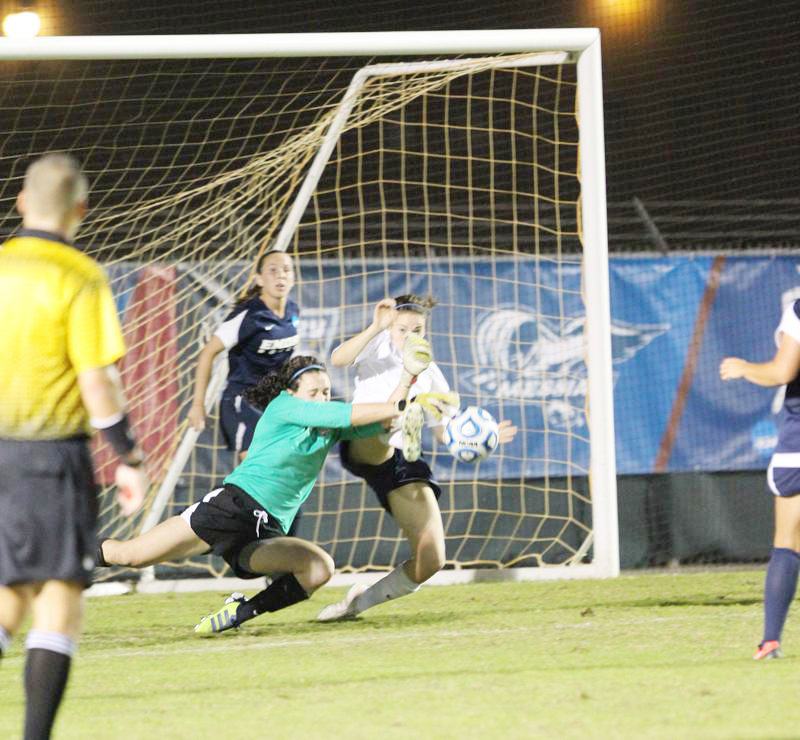 Both teams entered the game with one loss respectively. Messiah’s loss came against the Eagles; exactly three months prior to the national championship. In the semi-final match, the Eagles edged Wheaton College (IL) 2-1.

“As a senior, it was everything I had worked for,” said senior captain defender Ashley Kaiser. “It was a dream come true, if only we could have won; but it was still an incredible moment.”

The opening play was just as advertised, with two of the top defenses in all of college soccer squaring off. No shots were attempted until the 14th minute, when Messiah’s Anne Trapp’s shot was blocked by All-American junior center back Lauren Gorodetsky.

Messiah was able to take the lead in the 21st minute, when Rachel Scheibeler received a breakaway pass from Alex Brandt, netting it past junior goalkeeper Erica Stein for her 16th goal of the season.

The score remained 1-0 at the end of the half, with Messiah leading the Eagles in shots eight to four. The Eagle’s only goal scoring opportunity in the first half came via header by senior forward Katy Kruse, which was saved by freshman goalkeeper Audra Larson.

The Eagles other two opportunities on net came from sophomore forward Emily Feldman and Senior midfielder Lee Bachouros; both of their shots missing just high.

In the 48th minute, senior goalkeeper Kaele Leonard had a beautiful diving save, which gave Emory some momentum as the half progressed.

Emory’s prime equalizing opportunity was sparked with just under 10 minutes left in regulation, when Emory received a free kick from just outside the right side of the 18-yard box.

Bachouros took control of the ball, sending a shot barely high and wide of the net. She tried to find her luck again off shooting off a corner kick, but missed wide again.

The Eagles finished with a 13-12 shot count, while the Falcons held the advantage in shots on goal with 3-2.

The 2012 campaign proved to be the most successful in the program’s history, reaching the finals for the first time, and finishing with a 15-2-7 record. Feldman, junior forward Veronica Romero and sophomore forward Charlotte Butker all finished with a team high 20 points.

“At the beginning of the year, there wasn’t really anything to lose,” noted Kaiser. “We hadn’t played them before and with the championship, there were a little bit of nerves. I don’t think there was a difference in talent, it just came down to the inexperience of never being in that situation.”

In the semi-final against vs. Wheaton, Feldman scored an unassisted goal in the 64th minute. Just minutes later, Butker was fouled just outside the 35 yard line. Gorodetsky took the direct kick, launching a perfect shot over the goalkeeper to record her first goal of the season.

Just over a minute later, the Thunder were able to capitalize, when sophomore forward Anna Seabolt scored from the six-yard box.

The Eagle’s were able to pick up the pace on defense, and prevented Wheaton from executing an equalizer.

Although the championship loss was a tough pill to swallow, there were plenty of individual, as well as team accomplishments that bolstered Emory’s season.

Gorodetsky was named the Most Valuable Defensive Player of the tournament for her stifling defense in the semifinal as well as championship match. Both junior defender Lauren Drosick and sophomore defender Kaelyn Lucas were named to the all-tournament team as well.

After the victory, Messiah (24-1-1) obtained their second straight national championship, and fifth overall.

“It is a tough loss but we definitely hung in there,” said Kaiser. “The team has huge potential for success next year. The experience of being in the championship will definitely help us down the road.”