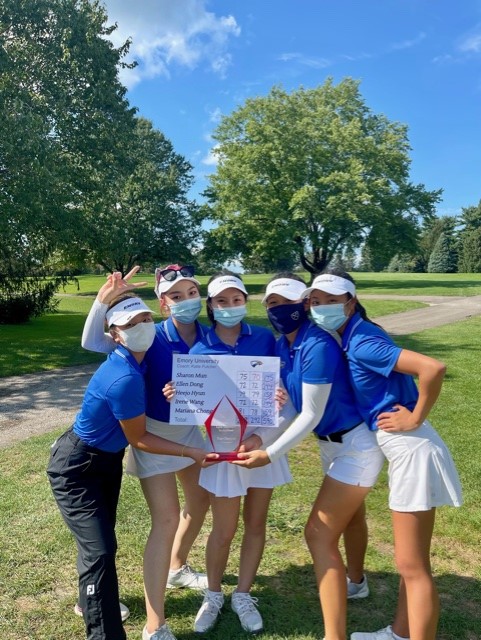 Dreams came true for Emory’s women’s golf team on Sept. 5 after they became the program’s first team to win a tournament. The Eagles secured their win at the Lynn Schweizer Invitational, which included 10 teams of five golfers each and took place at the Denison Golf Club in Granville, Ohio.

The women’s golf program at Emory University is still new, having launched in fall 2019. Fighting through a pandemic and being in existence for less than two years makes winning a tournament a huge milestone for the Eagles. Head Coach Katie Futcher was hired in 2018 to build the program, and while proud of her team’s accomplishments, she said this is just the beginning.

“It was so satisfying to watch our players compete and perform well,” Futcher said. “It makes me feel that the program is headed in the right direction, and I’m excited to watch these players pursue their own personal excellence and achieve their goals.”

Some of the team’s newest additions and those who have barely worn their uniforms led the team to victory. Freshman Ellen Dong and sophomore Irene Wang tied for medalist honors out of the 63 players in the tournament. Dong and Wang each totaled a score of even-par 144 (72-72). Wang distinguished herself by tallying 27 pars, the most of any participant, while Dong was right behind her with 25 pars.

Freshman Sharon Mun also stood in the spotlight for the Eagles, scoring a 145 (75-70) that tied her for third place out of all competitors. Dong and Mun each tallied four birdies, the most of anyone on their team, while Dong, Mun and Wang all impressively scored one eagle each.

The rest of the team also fared well, with freshman Heejo Hyun finishing in eighth place while sophomore Mariana Chong concluded the tournament in 11th place. Chong credits the win to the team’s dedication.

“I am very sure that our win was the product of all the hard work and effort that all five of us and the coaches have put in,” Chong said.

With a full season ahead, Futcher sees the team’s first tournament win as a stepping stone to more in the coming months.

“These players have high goals for themselves, and I truly believe the sky’s the limit,” Futcher said. “I’m excited and honored to be a part of their journey.”

Follow the Eagles during their next competition on Oct. 2-3 when they travel to the Williams College Women’s Golf Championship in Williamstown, Massachusetts.