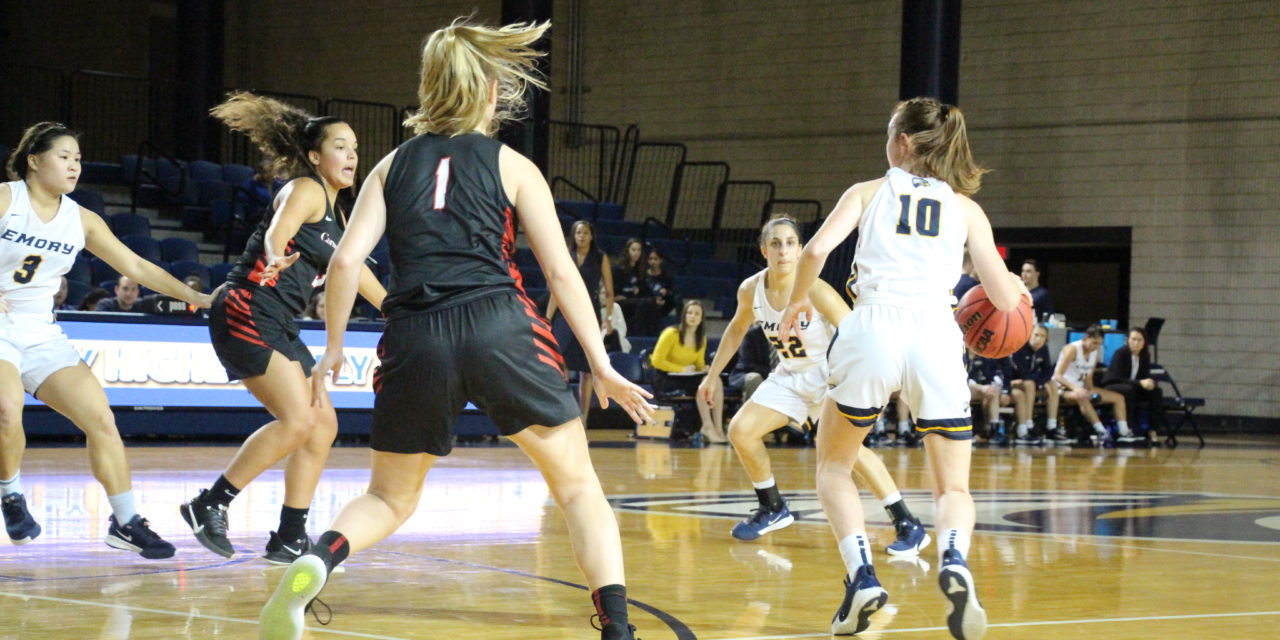 Against Carnegie Mellon, the Eagles’ stifling defense took center stage and held their opponent to only 43 points and 34.9 percent from the field. It was the fifth game this season in which they held their opponents under 45 points.

The decisive moment in the 55-43 victory was an 8-0 run that brought the Eagles to a six-point advantage by halftime. Ultimately, the Eagles put the game to bed in the third quarter, draining three consecutive 3-pointers to build a 14-point advantage going into the fourth quarter.

Against Case Western, junior center Blair Ripley stepped up to lead all scorers with 20 points and nine rebounds. Weiss and sophomore forward Anna Arato proved to be lethal from long range, as they combined for eight threes. The Eagles won 74-50.

On Jan. 31, No. 15/23 UChicago snapped the Eagles’ nine-game winning streak with a 80-71 victory. Senior guard Allison Chernow and senior forward Erin Lindahl combined for 30 of the teams’ points and Ripley added 10 points, four rebounds and two blocks off of the bench in a losing effort.

The Eagles return to court on Feb. 2 when they travel to face Washington University in St. Louis (Mo.). Tip-off is scheduled for 3 p.m.

The Emory men’s basketball team cruised to wins over Carnegie Mellon on Friday night and Case Western on Sunday afternoon. In the first game, junior guard Romin Williams and junior forward Matt Davet each totaled 20 points in leading the No. 8 nationally-ranked Eagles to a 91-72 victory. The Eagles improved their season record to 15-2 after an 80-66 win versus UChicago on Jan. 31.

The Eagles carried their momentum from the game against Carnegie Mellon into their game against Case Western on Jan. 26, leading from start to finish in a 106-70 blowout.

Junior guard Nick Stuck and sophomore forward Mason Johnson led the way for the Eagles, combining for 34 points. Four other Eagles scored in double figures and the team combined to knock down a season-high 16 3-pointers.

On Friday, the Eagles were led by Davet, who scored 19 points in a 14-point victory over UChicago. Both Johnson and junior forward Lawrence Rowley recorded 14 points in the win, while junior guard Matt Schner contributed 13 points to go along with 12 rebounds, which tied his career-high.

On Feb. 2, the Eagles will face the UAA-leading No. 11 Washington University at 1 p.m.

This weekend, the men’s track and field team competed in the JDL Flat is Fast Invitational in Winston-Salem, N.C. Although the meet did not feature team scoring, several Eagles set personal records.

Overall, the distance runners impressed at the meet, claiming the top two spots in the 1-mile run and the top five spots in the 3000-meter run. Junior John Cox finished at No. 1 in the 3000-meter run, with sophomore Spencer Moore, junior Egan Kattenberg, junior Matthew Dillon and sophomore Brett Lucas finishing second through fifth, respectively. In the mile, freshman Andrew Pahnke edged junior Jacob Hedgepeth for first with a time of 4:25.32.

In the field events, freshman Patrick Osborne cleared 4.25m in the pole vault to finish in No. 2 place, while freshman Wheeler Wilson finished No. 3 in the shot put with a throw of 13.76m.

The team will return to action on Jan. 31 for the Carolina Challenge at the University of South Carolina in Columbia.

Junior Rebekah Bondi had a career-best day in the 60-meter dash, finishing with a time of 7.74 seconds that brought her at No. 2 in the event. Additionally, Bondi leaped a career-best 5.36m in the long jump, finishing in No. 4.

Junior Laura Sheckter also posted a personal-best mark in the weight throw, earning first place for a throw of 13.97m. Sheckter also finished at No. 2 in the shot put competition with a toss of 12.54m.

Elsewhere on the field, senior Isabel Saridakis cleared 3.45m in the pole vault to finish in No. 1 place.

On the track, the Eagles claimed the top two spots in the 1-mile run, with freshman Shana Fitzmaurice and junior Ana Morris crossing the finish line at 5:30.38 and 5:37.66, respectively.

In the 800-meter run, freshman Grace Formichella and junior Rachel Shanahan paced the Eagles with second- and third-place finishes, respectively.

The Eagles’ next competition will take place on Jan. 31 at the University of South Carolina in Columbia, S.C.