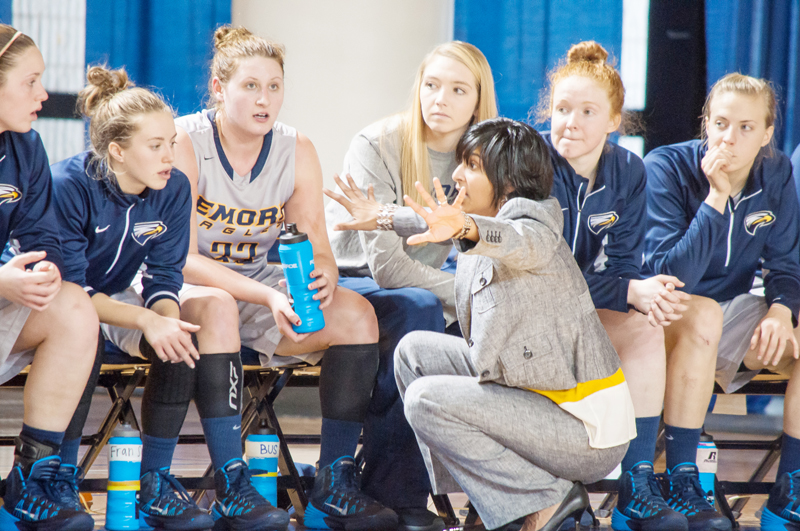 This past weekend, the women’s basketball team faced two tough conference opponents: the University of Chicago (UC) Maroons and the Washington University in St. Louis (Wash. U) Bears.

On Friday, Emory defeated UC, 86-78. Two days later, Emory played rival and second-ranked Wash. U and lost 69-61. After its loss, Emory is now ranked 16th in the nation. For the season, Emory is now 15-3, with a 4-3 record in the University Athletic Association (UAA). While Emory has had a few bumps in the road recently, it is too early in the season for panic.

Against the UC, Emory started off with one of their best performances of the season, with 50 points in the first half.

They had a 50-33 lead at halftime over one of the better teams in the UAA. Leading scorers Hannah Lilly and Savannah Morgan each had 15 points in the first half. Emory shot more than 51 percent in the first half and five for 10 from three. Although UC shot 48 percent during the first half, they struggled to keep up with Emory’s pace.

Although UC out-played Emory in the second half, the first half deficit was too great for the Maroons to overcome. At one point, they managed to cut the Eagles’ lead to four points at 73-77, but Emory’s execution at the end of the game sealed their victory.

Against second-ranked Wash. U, Emory did not put on its best performance. The Bears are one of the best teams in the nation, and Emory failed to prevail in an intense rivalry game. Like most games, Emory’s full court press forced more turnovers than the opponent, with 14 turnovers forced versus their 10 turnovers. However, Wash. U dominated the boards, with a 44-32 edge.

Additionally, the Bears got to the free throw line 13 times versus Emory’s five attempts. Wash. U had a very balanced effort, with five players scoring in double digits.

Moving forward, Emory still has an opportunity to gain ground in the UAA title race. However, after three conference losses, they have little room for error. Although their UAA title last season raised expectations this season, it is no easy feat to win the UAA two years in a row. The UAA is one of the strongest divisions in the nation and especially this season in particular.

The conference is deep and features three legitimate national title contenders in Washington, New York University and Emory. Emory is currently third in the conference at 4-3, but as long as they continue their strong play they should be a decent seed in the NCAA Division III tournament.

They have been in a few more close games than they have wanted and need to put away their easier opponents earlier in the game. Their high-pressure defense and outstanding ability to force turnovers sets them apart from other teams.

Coming up, Emory will face UC and Wash. U again on the road. This is a great opportunity for Emory to climb up the standings and prove that they are one of the best teams in the nation. Both should be tough games, but Emory has a great chance of winning both games on the road.