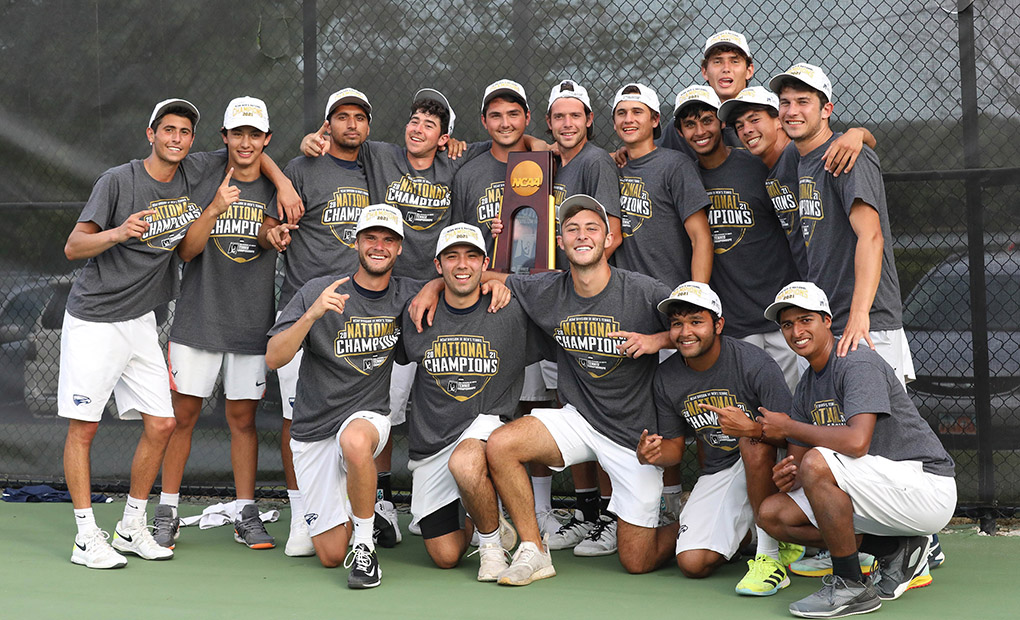 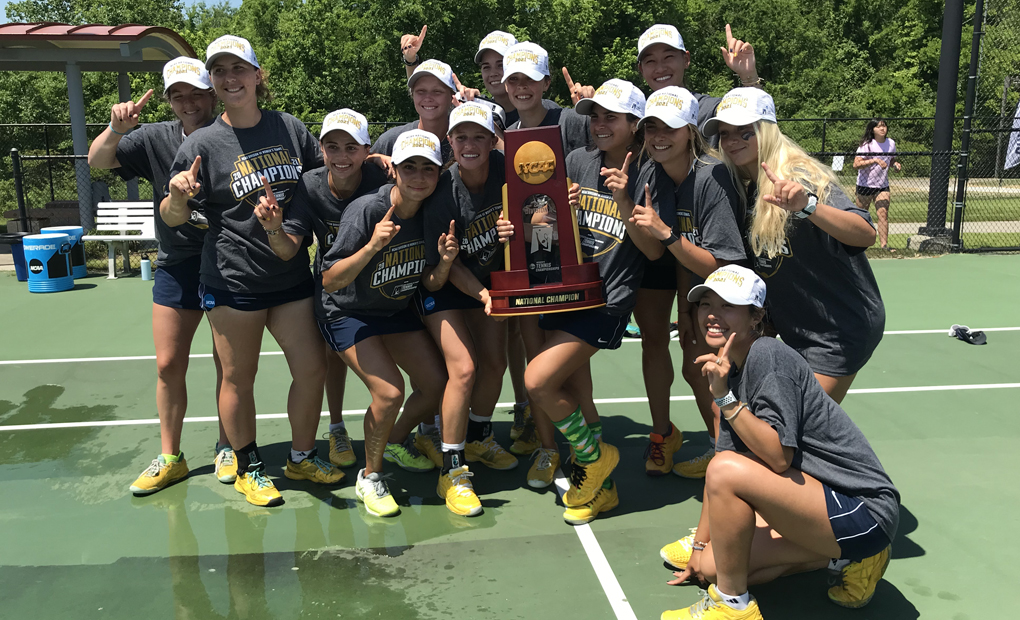 Emory’s women’s tennis team poses with the NCAA Division III National Championship trophy after winning the tournament. This is the Eagles’ eighth title since 1996. (Courtesy of Emory Athletics)

On May 26, both Emory’s women’s and men’s tennis teams won the 2021 NCAA Division III National Championship in Chattanooga, Tennessee. The women’s team swept the reigning champion Wesleyan University (Conn.) with a score of 5-0 in the finals to bring home their eighth national title. The men’s team beat Case Western Reserve University (Ohio) 5-2 in the championship to capture their sixth NCAA victory.

Women’s tennis finished the season with an overall record of 10-3. While the record is impressive enough, winning the title while managing COVID-19 makes the moment even sweeter, said head coach Amy Bryant.

“Coaching particularly this group of girls, through the pandemic, has been probably one of my most rewarding experiences yet,” Bryant said. Although the pandemic brought many challenges, she added, “I really think that we became stronger competitors because of the pandemic and having to endure everything. I don’t think we would have had the same performance had we not been through the past 16 months.”

Freshmen Sam Falcon and Ana Cristina Perez both had their first collegiate athletic experiences during a year unlike any other.

“Winning a national championship as a freshman feels so special,” said Falcon and Cristina Perez in a joint statement. “We feel grateful for the opportunity to play on this team with such talented, caring, and hardworking individuals who have made us feel so welcomed since the beginning of the season.”

Congratulations, Emory! It’s been an amazing week for the Eagles!

As for the men’s championship, Emory won their sixth NCAA title by a score of 5-2 over the Case Western Reserve Spartans.

In doubles play, the No.1 doubles team of senior Hayden Cassone and junior Antonio Mora won 8-2 against Spartan seniors Neil Mabee and Jonathan Powell. The No. 2 duo of junior Andrew Esses and senior Will Wanner won 8-4 in their final match, finishing the season with an undefeated 6-0 doubles record.

Over in the singles competition, Esses won at the No. 3 spot 6-3, 6-0 while Wanner carried over the Eagles’ momentum as he gave the team a 4-2 lead when he won 6-0, 6-4. Freshman Nolan Shah won the pivotal point in his match to earn the 6-3, 6-4 victory as the Eagles went on to earn the 2021 Division III NCAA Championship.

Head coach John Browning emphasized the importance of team culture in their success.

“You can have the most talented team in the country, but, if your culture is toxic or not right, it’s difficult to be successful,” Browning said. “We have built a culture that teaches our players to be unselfish and to place the team’s needs above anything else.”

Browning was grateful for everyone who played a part in making sure the season would happen during the pandemic.

“Thanks to our administration, Sewanee, and the NCAA, their courage and support helped us to be able to allow our four seniors to finish their careers on the court,” he said. “There are no words that can properly articulate the gratitude I have for all that made this possible.”

Sophomore Daniel Sanz discussed how special it was to win the NCAA title the same day as the Emory women’s team. Sanz also described how much the championship win meant to him and his teammates.

“It’s extremely special because of the seniors that we’re losing after this year,” Sanz said. “We’re losing four really impactful players and leaders on our team, and they’re just really special guys that contributed so much to the team in their own ways. We just really wanted to go out there and do it for them.”