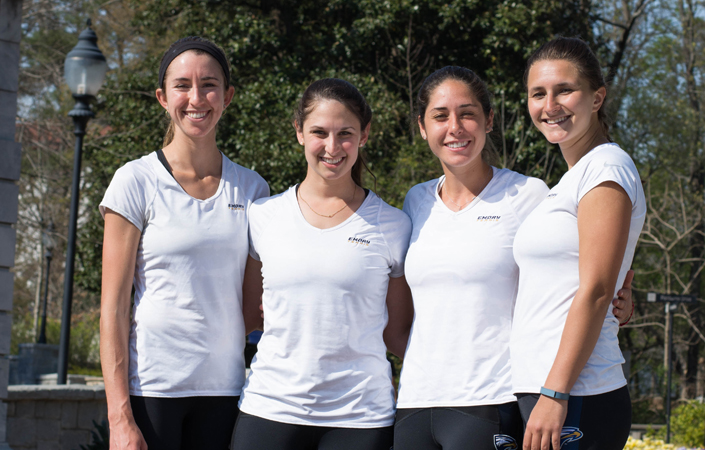 “It was an extremely exciting win,” senior Madison Gordon said. “I only have five Division III losses, and four of those have came against Williams. We’ve been working really hard to come back and get some revenge for our loss in the national championship last May.”

The team of juniors Michelle Satterfield and Paula Castro started the afternoon off with an 8-3 No. 3 doubles victory. The next match featured the No. 2 doubles teams, and Emory notched another victory thanks to the team of junior Katarina Su and sophomore Bridget Harding. Williams won the final doubles match, when their No. 1 pair beat Emory’s team of sophomore Anna Fuhr and freshman Daniela Lopez 8-4.

Senior Beatrice Rosen started the singles competition off with a win in her No. 4 singles match 6-1, 6-2, putting the Eagles up 3-1 in the overall match, but Williams sophomore Juli Raventos followed that up with a straight set win of her own, beating Harding 6-1, 6-2 on the No. 1 singles court.

Though the possibility that Wednesday could have been the last match Gordon would play at home, she is confident that the team will play at Emory during the National Collegiate Athletic Association (NCAA) D-III Regional Tournament.

“It was bittersweet thinking that this could possibly be our last match at home,” Gordon said, “but hopefully we’ll be able to host regionals, so we’ll have two more matches.”

With her triumph over Williams on Wednesday, Gordon moved into 15th place all-time for singles victories with her 71st career win. When asked about the milestone, Gordon was pleasantly surprised that she had reached that high.

“That’s really exciting,” Gordon said. “I didn’t even know I was up there. I couldn’t be happier to represent Emory and play for Coach [Amy] Bryant.”

Rosen also moved into a tie for 10th place all-time for singles victories with her 74th career victory.

The team will look to ride this wave of momentum into their next match against Division I opponents Charleston Southern University (S.C.) on Saturday, April 9.