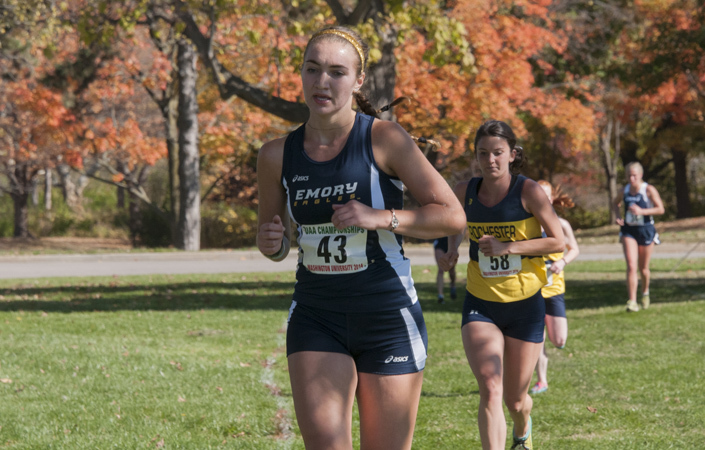 On Saturday, Emory’s cross country team ran well with the men finishing in sixth  and the women placing second in the Furman Classic after travelling to Greenville, S.C.

For both groups, there were impressive overall finishes, improvement among the older runners and surprisingly great performances from younger runners — especially considering that the Eagles were one of the few Division-III teams at the meet.

The No. 21 women’s squad took second place,  just behind Montevallo University (Ala.). Junior Gabrielle Stravach led the team, finishing third overall among 156 runners in the 6K and achieving a personal record of 22:07.

“Gabby [Stravach] running 22:07 was really amazing,” Head Coach John Curtin said. “I think we ran as well as we ever have. The times of our top seven runners were really good for this stage of this season.”

Stravach was not the only strong performer for the Eagles. Junior Megan Waples, running second in the lineup, also made a personal best, clocking in at 22:51 and finishing seventh. Following Waples was another personal-best display by junior Tru Powell, who claimed ninth place at 22:57. From there, sophomore Clare Ubersax ran a time of 23:05 to take the 13th overall finish, and senior Mia Eisenhandler registered a mark of 23:08 to snag the 14th spot.

“On the guys’ side, we ran well,” Curtin said. “The highlight was freshman Luis Torres. I don’t think we have ever had a freshman run that well.”

Torres offered an interesting perspective on how his dominating performance came about. “One thing about going to events like these, especially as a freshman, [is] there were no expectations. I kind of let it be whatever it was,” he said. “I just ran.”

Although Curtin has described Torres as “only scratching the surface” of his ability, the talented freshman credits his success to his teammates and the cross country programs’s useful training.

“The team chemistry here is just right. The environment is right for me to flourish,” Torres said. “The upperclassmen have been like role models to me. They have been super willing to take me in and work on workouts with me.”

Torres also talked about how his physical preparation has really changed for the better compared to his days in high school: “The training here is different and better than what I had in high school. I am running longer mileage than I have before and doing different workouts that are more beneficial to me.”

In addition to Torres’ astonishing performance, sophomore Bennett Shaw was right behind Torres with a time of 25:59, achieving 24th overall and yet another new personal record. Shaw has continually shown drastic improvement as the new season has progressed.

The Eagles will return to racing on Saturday, Sept. 17, when they compete in the Falcon Classic at Montevallo University (Ala.). However, the Eagles’ eyes are more focused on Oct. 1’s competition at the Greater Louisville Classic in Kentucky.

“[The Greater Louisville Classic] is an important pre-national meet on the same course that the national championship will be on,” Curtin explained.

For Curtin, prioritizing Louisville means some strategic decisions regarding who will run in this weekend’s race.“

On the women’s side, we are going to keep some of our top runners out. We don’t feel like putting them out three weeks in a row,” Curtain said.

The Eagles’ coach will also watch this week’s practice and competition to evaluate and plan where each runner fits on the team going forward. “We got a lot of young kids,” Curtin said. “Saturday was their first race. We need a little bit more of a bigger picture of what they can all do.”

As Curtin determines his top 14, his runners must continue to put in the hard work while being smart about taking care of their bodies. The journey towards achieving a 12th consecutive appearance at the NCAA Division-III Championship continues.