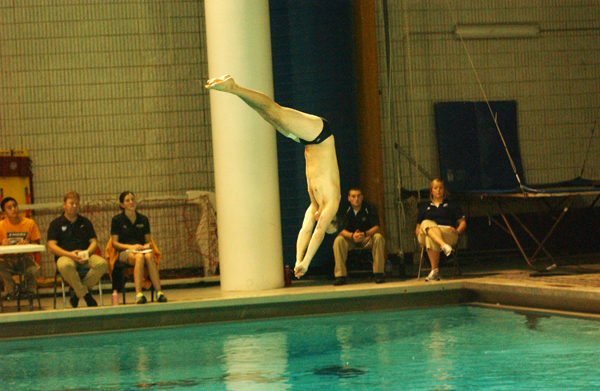 The NCAA Division III Men’s and Women’s Swimming and Diving National Championships began Wednesday in Shenandoah, Texas, and will conclude Saturday. Eighteen women and 31 men are representing Emory at the meet. Both the men’s and women’s squads are coming off of University Athletic Association (UAA) championships.

As of press time, the swimmers had completed the first day of competition. The women’s squad ended the day in first place. Scoring 151.5 points, they led second place Kenyon College (Ohio) by 47.5 points.

The women’s team is ranked first in the NCAA, and they are hoping to win an otherworldly fourth consecutive NCAA Championship. The team is led by Senior Captain Anna Dobben who was named the UAA Swimmer of the Year.

Dobben and the Eagles know that they are coming in as the favorites and appreciate the pressure that they are under as the three-time defending champions. Still, their goal is simply to swim faster than their opponents.

“This is our party and there are targets on our backs, but we approach this with the score always being 0-0,” Dobben said. “We have to go out there every single day and prove that we are the best and swim like we are the best.”

Dobben is coming off both a terrific regular season and an exceptional performance in the National Championships last year.

In 2012, she was part of the Eagles’ national championship-winning relay teams in the 200-yard and 400-yard freestyle.

“I know my technique is there, and everything is ready to go,” Dobben said. “I just need to focus on swimming fast.”

Dobben is not the only defending national champion competing in this meet for the Eagles. Senior Leslie Hackler and sophomore Sadie Nennig were part of the championship-winning 200-yard individual medley (IM) relay team, and sophomore Nancy Larson and senior Renee Rosenkranz joined Dobben on the winning 400-yard freestyle relay team.

Not only have many individuals on the team racked up an impressive list of championships and honors, but the whole squad supports each other like a family.

“There may be one person swimming in the water, but 17 girls are standing behind them supporting them,” Dobben said. “You can see and hear them when you are in the water. There is a lot of camaraderie.”

“As a team, we need to execute each swim with a lot of finesse and a lot of focus in every race, no matter what race was before it or what race is to come,” Dobben said. “My expectations are a lot of best times and to have a lot of fun with my best friends. Everyone is looking forward to spending quality time winning some races and just being together.”