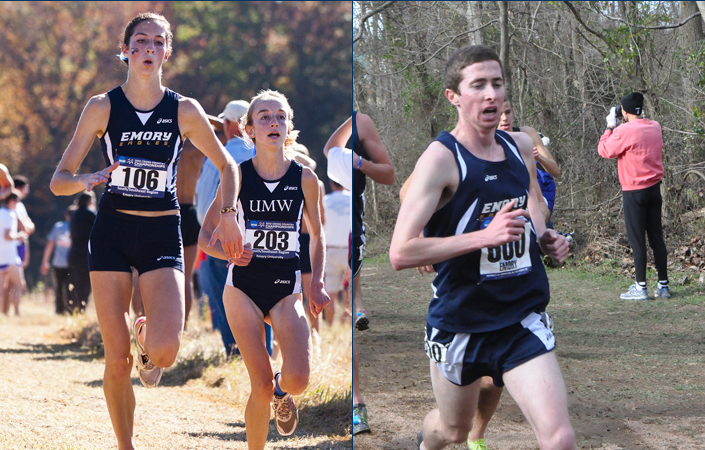 The Emory Men’s and Women’s Cross Country Teams began their season this past Saturday in Rome, Georgia at the Berry College Clara Bowl Invitational. Both squads validated their high pre-season rankings with strong performances, feeding off of their strong conclusions to last season.

Both the Men’s and Women’s teams qualified for the NCAA championships last year. The Women’s appearance was the 22nd time they have earned the trip in the past 23 years. The other teams competing in the meet were LaGrange College, Oglethorpe University, Savannah College of Art and Design, Shorter University and Berry University, the meet’s host.

The Men’s team competed in an 8k race and placed second overall behind first place University for Creative Careers (Ga.) by a single point. Three of the event’s top six runners were from Emory, including Senior Alex Fleischhacker, who ran a 27:23 in the 8k, earning second place overall.

Fleischhacker is one of the team’s senior captains and last season’s “Most Valuable Runner.” Coach Curtin said Fleischhacker followed his race plan perfectly en route to his second place finish.

Junior Lukas Mees ran a 27:51 that placed fourth in the event, and, in his first collegiate meet, freshman Jordan Flowers ran the sixth fastest time, finishing in 28 minutes, 21 seconds.

Mees missed last fall because of illness, but is looking to bounce back and deliver on the promise showed during his freshman season, when he earned the “Most Valuable Runner” designation.

Sophomore Grant Murphy ran a 28:30, the fourth fastest on the team and a personal record.

“To run a PR this early in the season tells you how hard Grant trained this summer, Curtain said. “We need a few more Grant Murphy efforts.”

Senior Tyler Cooke was the final Eagle to earn a scoring time, finishing 10th overall with a time of 28 minutes, 31 seconds.

The team’s second place finish is especially impressive, because the team was not at full strength.

“Our guys went into the meet a little shorthanded with Michael McBane and a couple of our new kids that we are counting on coming off injuries and not ready to race yet,” he said.

Along with new Assistant Coach Lance Harden, Coach Curtin and the team will continue to work to get better.

The Women’s team came into the meet Saturday ranked first in the South/Southeast Region and 31st among D-III programs nationally.

“We have as deep a talent pool with the women’s team as I have had at Emory,” Curtin said.

He was pleased that the top five runners all finished within 25 seconds of each other, even though he still believes they can do better.

Emory runners took places two through eight in the 6k event, as well as places 12-18. The team’s top three finishers were Gogniat, running a 23:39, Surtees,  running a 23:40, and senior Stephanie Crane, returning from a semester abroad last fall and running a 23:43.

“[The three runners] ran the first three miles together step for step. It was fun to watch and is exactly what they need to do week in and week out if we are going to be a national caliber team,” Curtin said. “It was pretty easy to do in a small meet like Berry. The real test will be to see if they can maintain that discipline in the big meets ahead.”

“I would definitely say this was the best start to any season we have had since I’ve been on the team,” Gogniat said.

While the returners provide plenty of experience and talent, Gogniat believes the newcomers are a talented group ready to provide an “immediate impact.”

This influx of new talent has added to the competition within the team, leading Curtin to liken the battle for the top spots to a game of musical chairs.

Curtin believes that this type of competition within the team “only makes you a better team in the long run.” The performance at the Berry meet has provided plenty of optimism, and Gogniat predicts strong team performances at the bigger meets later in this season.”

Both the Men’s and the Women’s teams will look to continue their strong starts on September 13th in Greenville, South Carolina at the Furman Classic. There is a long season in front of the teams, and although Coach Curtin acknowledges a lot can happen before the big meets in November, he feels especially confident in his athletes this season.

“These new kids love running, but more importantly, from what I’ve seen so far, they really like to race and compete,” he said. “And that is a major distinction.”