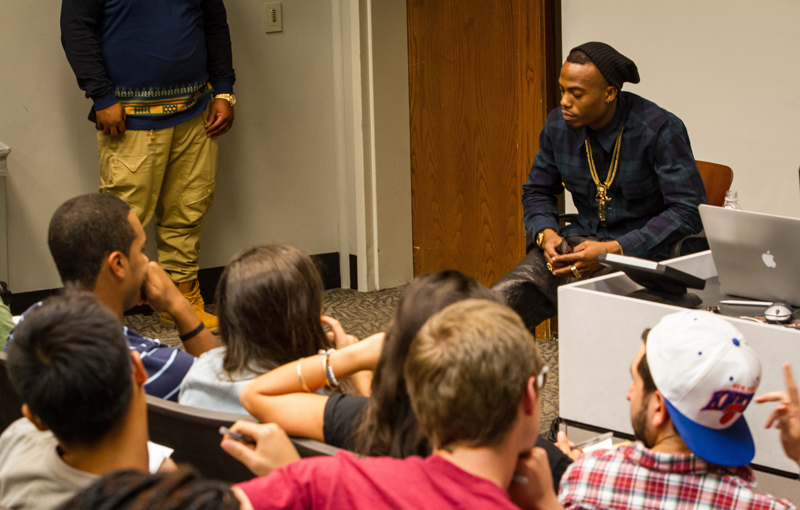 College senior and WMRE General Manager Wilma Qiu said B.o.B contacted the Emory student-run radio station last Wednesday to coordinate the session. She then selected about 20 to 25 people to be a part of the focus group.

“I looked for a lot of people who I knew had a vested interest in hip-hop and knew his music,” Qiu said. “We looped in a few people who hadn’t listened to him as much so we could get people who could just be a consumer of music.”

Qiu said the event was scheduled for Monday but had to be shifted to last night due to B.o.B’s travel schedule.

B.o.B’s manager Brian “B-Rich” Rich headed the session asked attendees to put their phones on the floor so no one could record the songs.

Rich played the whole album and requested student feedback after each track, asking the audience to be blunt.

Some of the students thought this album was some of the artist’s best work while others felt it was boring.

B.o.B was absent for this part of the event because he was running late.

He entered the room after all the tracks had been played. He wore a dark green plaid shirt, shades, leather pants, Polo combat boots, gold chains and rings. He apologized for his lateness. Rich asked that everyone relay everything said to B.o.B, which led into a question-and-answer session.

B.o.B said his favorite track on the album was “Fly Motherf–ka'” because of the instrumentals on that track. He also said he really likes “Throwback” and “Forever.” He stated “Don’t Let Me Fall,” off of his debut studio album B.o.B Presents: The Adventures of Bobby Ray, was his favorite song he has ever done, as some of the audience nodded in agreement.

“I try not to get in my own way as an artist because even though I may think it’s the best, someone else might not,” he said. “I do what I like but season it for the palate of the music connoisseur.”

B.o.B. described what it was like working with hip-hop superstar and fellow Atlanta native Future. They both attended Columbia High School in Decatur, Ga.

“We’re both Scorpios, and we’re cool because we’re from the same side of town,” he said.

Qiu asked the artist what his biggest influence was. B.o.B said chill, instrumental electronic dance music (EDM), not dubstep EDM, is what he listens to the most other than hip-hop.

B.o.B explained that he titled the album Underground Luxury because while he was growing up, he had no walls or furniture.

“We came from nothing,” he said. “But we tried to make ‘nothing’ luxurious.”