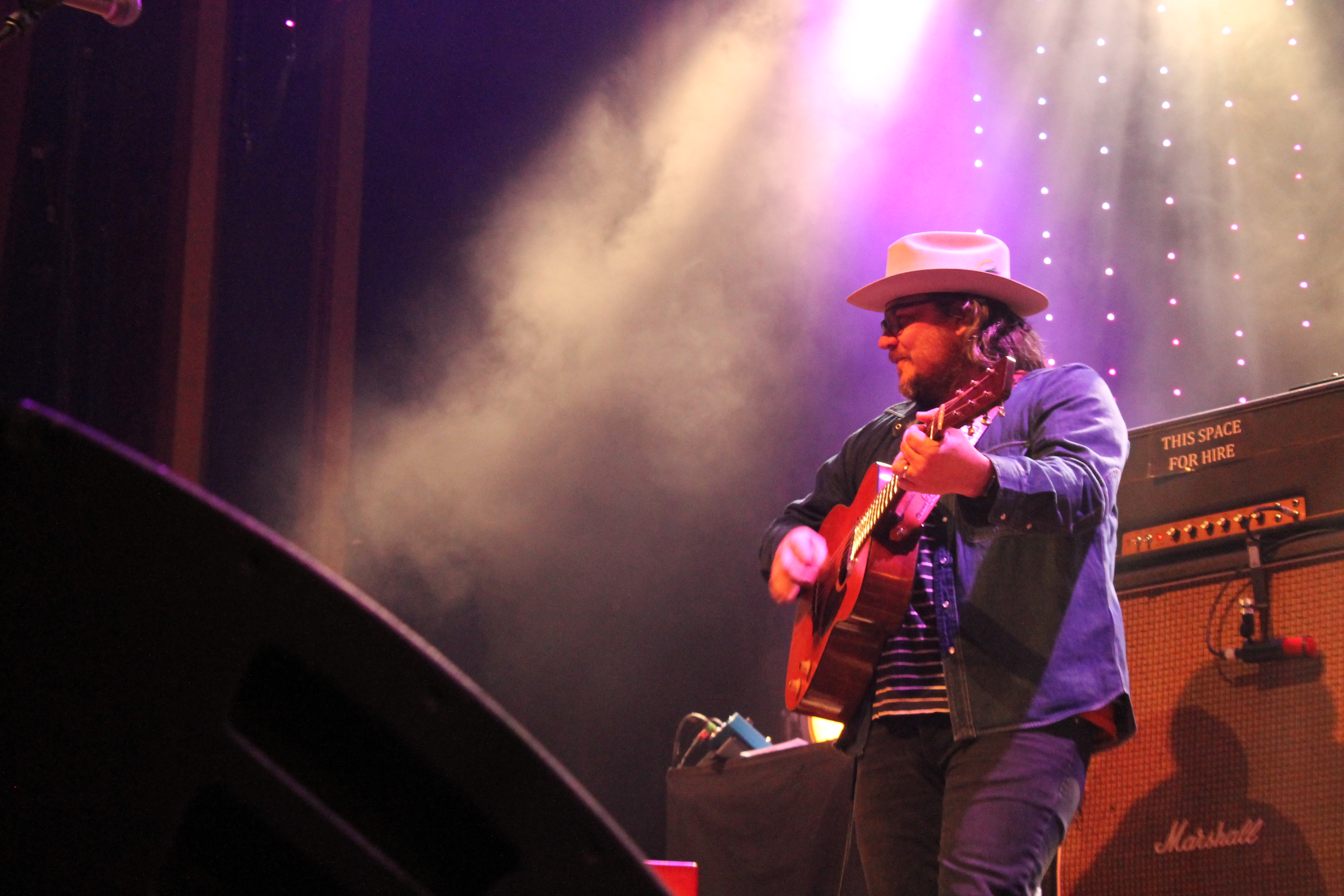 Midway through Wilco’s performance at the Tabernacle on Feb. 10, lead singer Jeff Tweedy looked up from his microphone and complimented an audience member on their fried chicken sweatshirt. The crowd burst out laughing — the comment spoke to a truth about the culture of the South: of course someone in Atlanta would wear a fried chicken sweatshirt to an alternative rock concert. But in hindsight, the comment takes on a certain, odd depth. Although Tweedy had only said a couple of words all night, it made sense that he would choose to comment on something as detail-oriented as the sweatshirt of someone in the crowd — Tweedy is an artist that is aware and perceptive of his audience. This observational attribute translates to his own work; his extensive use of different guitars showcases his precise ear and dedication to sounds.

Though described by Rolling Stone as “one of the most respected bands on the planet,” Wilco is one of those musical groups that most people have heard of only in passing; their name is as equally elusive as it is familiar. En route to the Tabernacle, my Uber driver looked in the rearview mirror and said, “The name sounds familiar, but I don’t think I know any of their songs.” Sounds about right, I thought. It’s as if they’ve purposefully designed their image to be both big and small

But for those who are dedicated listeners, Wilco is an experimental music force to be reckoned with, and their live performances are, fundamentally, a musical liberation of their sound. Their studio recordings are much too stock and circumscribed — especially for guitarist Nels Cline, whose improvisational talent landed him a spot on Rolling Stone’s “100 Greatest Guitarists” list. To truly appreciate Wilco is to see them live.

From stripped down ballads to psychedelic grooves, Wilco’s strength is in their ability to bounce around the spectrum of musical genres and still maintain incredible energy throughout the performance. Their show at the Tabernacle bore witness to this strength. They started the show by playing the entirety of their latest album, Star Wars, which received a Grammy nomination for Best Alternative Music Album (but ultimately lost to Alabama Shakes’ Sound & Color). The audience didn’t seem to be too familiar with Star Wars, dancing to the beat with a bit of hesitation. Nonetheless, it was important for the band to play the album chronologically and in full, showing that they care about where they are as artists, not just about where they’ve been.

After playing through the entirety of Star Wars, Tweedy spoke about wanting to go back to their roots, and so they backtracked 20 years and played songs from their first album, A.M. Soon after, they delved into their classics, playing crowd favorites such as “I Am Trying to Break Your Heart” and “Impossible Germany.” As Tweedy sang melodically, Cline would layer each song with frenzied, improvised guitar licks. The differences in the two distinct sounds were startling to the ear, but they somehow managed to coalesce successfully by the end of each song — proof of the musical chemistry that exists between the band members.

The true heart of the show didn’t come until the encore of the two hour set, when the band came back on stage and shifted to a more acoustic sound, replacing their electric instruments with an acoustic guitar, melodica and xylophone. The stripped down versions of songs including “Misunderstood,” “I’m Always in Love” and “Jesus, Etc.” closed any gap that might have existed between band and audience and replaced it with an intimacy brought together by the appreciation of harmony and emotion. The show ended with a tender tribute to David Bowie, an acoustic cover of “Space Oddity” that everyone sang along to.

For Wilco, there was no need to amplify the sound or end with a bang. Both the band members and their fans are aware of Wilco’s place within the music industry. They have never been a band with the intention of having their name make news headlines or selling out stadiums — they simply dazzle through the music itself.