Why We Need Technological Advances in Medicine 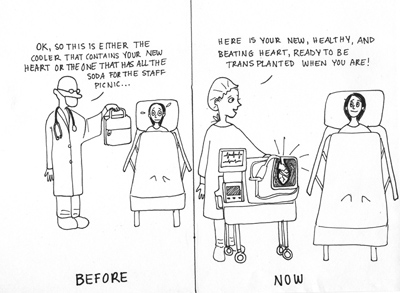 The scientists at the Friedrich-Schiller University in Germany successfully created a woven synthetic sheet that when folded can help build a nearly perfect artificial organ in 2011. Billy Cohn and Bud Frazier of the Texas Heart Institute took out the diseased heart of a dying man and transplanted him with a “continuous flow” pump in March of this year. The man was left without a pulse but a completely intact physiology along with a new lease on life. In the same month, the $80 million, over 50,000 square-feet. McLaren-Flint Proton Therapy Center opened its doors to the people of Michigan. Seventy miles away, Detroit filed for Chapter 9 bankruptcy.

There is indisputable evidence that health care and the related technology is going through a revolution where cutting-edge medicine can bring patients back from the brink of death. Before penicillin, a fever might have meant death. Now, even total organ failure does not have to mean the end. With this achievement in science comes a very real cost specifically in the age of health insurance expansion.

This dichotomy is maybe best understood when looking close to home. Construction has already begun on a $200 million proton therapy center in the heart of Atlanta via a united effort by Emory and private investment companies. A center of this stature is being built in a state that saw an increase in unemployment skyrocket from 5.1 percent in 2008 to 8.7 percent as of this month. The obvious question is why is such a disparity between the enormous costs of new health care technology and the financial accessibility of those who need the technology allowed to exist?

To answer this question, we need to step back and take a less myopic view of where these new technical advances are coming from. Cancer radiation treatment options before proton therapy included brachytherapy (invasive placement of radiation beads), Intensity-Modulated Radiation Therapy (IMRT), Gamma Knife and a variety of other radiation modalities. These techniques use a CT guided approach in conjunction with multiple beams to target a three-dimensional mass and inject high-energy radiation to induce apoptosis, or cell death. The problem is that these beams of energy are continuous. Even if the majority of the energy is targeted at the tumor, there will be a significant dose of energy that is deposited into surrounding tissue. When dealing with the prostate, head and neck cancers and craniospinal tumors in children, there is a significant risk of radiation damage and cancer formation in the surrounding vulnerable tissues.

Proton therapy is different. A proton is more susceptible to magnetic manipulation than X-rays and can be controlled to deposit their energy directly onto the tumor with very minimal (if any) dosage to surrounding tissue. According to Walter Curran, executive director of the Winship Cancer Institute here at Emory, there is no doubt in the principle or efficacy of proton therapy. In an interview with The Cancer Letter, he proves his point by citing two Phase III trials, one stage III lung cancer study, a glioblastoma study and one phase II head and neck study.

Even though the cost of such a center are prohibitive, there is institutional evidence to support that proton therapy is the way of the future.

When we think of who is at the forefront of technology, and specifically health care technology, the United States has always been a leader. Instead of focusing on specific centers within economically-depressed regions, we should realize that in the face of depression, 13 of the most technologically advanced centers of the world were erected. In the last decade, the whole of the United Kingdom has built two proton centers, the same number built in Oklahoma City.

Once we look past the costs, we start to appreciate what this technology means for people diagnosed with cancer every year. These health care advancements are not just for show or demonstration. They have been researched and developed for the better care of patients not only in the United States but also indirectly around the world with the advent of new research.

What was medicine like before the MRI or CT scanner, both expensive pieces of equipment? How many millions of lives have been helped or saved because the cost of health care did not stop us from caring for your health? As health is a pillar of society, it cannot be suppressed.

We need solutions to cancer, AIDS, heart disease and a thousand other problems plaguing humankind. In the coming decade, we will see much of the fruit of our labor and ambition if only we have the courage and foresight to pursue it.

Abhi Kapuria is a second-year medical student from Fairfax, Va.