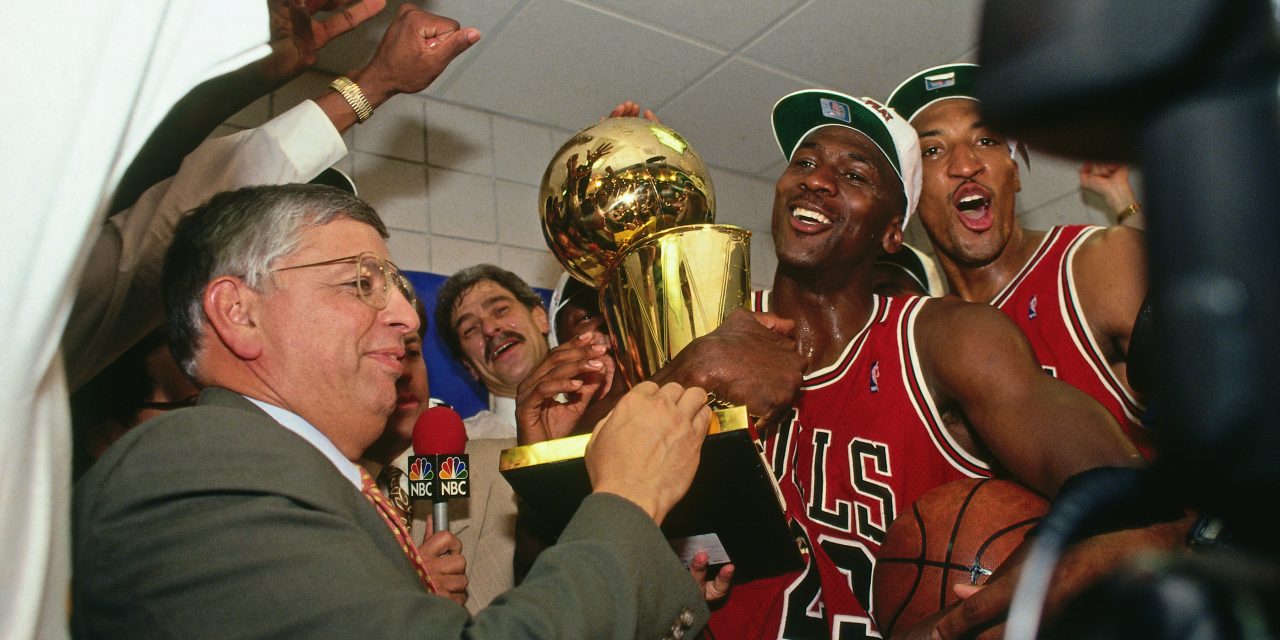 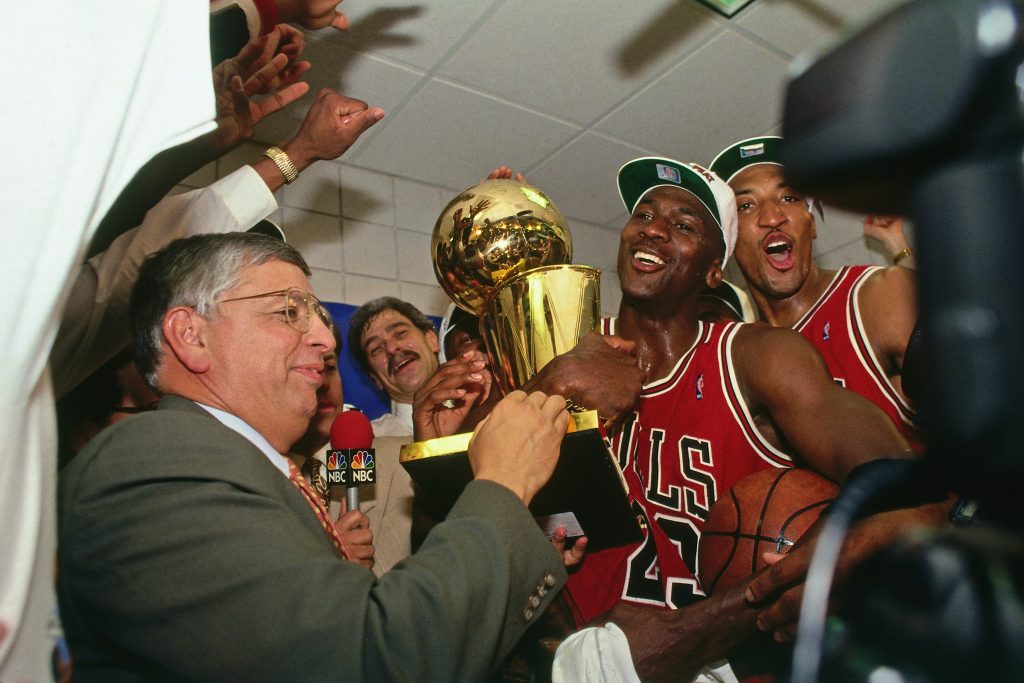 Former professional basketball star Michael Jordan celebrates his 1993 Championship victory. This and the rest of Jordan’s career are highlighted in ESPN’s documentary “The Last Dance”/Courtesy of Netflix

As he presented professional basketball star Michael Jordan with his fifth MVP award in 1998, former Commissioner David Stern professed: “on behalf of everyone this evening, thank you.” Stern was not only thanking Jordan for another remarkable season, but also for his 14-year career with the Chicago Bulls and the indelible mark he left on basketball. Now 22 years later, people are again thanking Jordan following the conclusion of ESPN’s most-viewed documentary “The Last Dance.” The final two episodes zeroed in on the final days of the Chicago Bulls’ dynasty. Here are the highlights:

Earlier episodes of “The Last Dance” fleshed out the stories of Jordan’s supporting cast, including Scottie Pippen and Dennis Rodman, as well as Head Coach Phil Jackson. In episode nine, Steve Kerr becomes a member of that list. Kerr had been featured throughout the series, most notably for the fight between him and Jordan during a practice in 1995. But, the filmmakers spotlighted Kerr in this episode and with him delivered an emotional gut punch.

Kerr was asked about the night of Jan. 18, 1984. As a freshman at the University of Arizona, Kerr received a phone call from a family friend: “He said, ‘Steve, I have terrible news,’” recalls a teary-eyed Kerr. His father, Malcolm Kerr, a professor of Middle Eastern politics, had been shot and killed in Beirut, where he served as president of the American University of Beirut. In an already hostile environment for Americans, Malcolm’s activism fueled further angst over the American presence in the country. Steve, an outspoken public figure himself, said “Everything that’s happened since, I’ve always had sort of a big-picture global perspective in life.”

Kerr threw himself into basketball thereafter because that “was the one thing [he] could do to take [his] mind off what happened.” And 13 years later, he finds himself a key member of the Bulls. Filmmakers asked Kerr if he and Jordan ever spoke about the loss of their fathers, but the two never did. Instead, Kerr gained Jordan’s trust on the court (the aforementioned in-practice fight) and delivered when his time came. In Game 6 of the 1997 Finals against the Utah Jazz, the Bulls had the ball with 28 seconds left and the chance to win the game. In the timeout, Jordan told Kerr to be ready because Jordan knew he would be double-teamed, leaving Kerr wide open. As Jordan predicted, the double came, and Kerr hit the shot to give the Bulls their fifth championship.

Jordan’s career is full of iconic performances, one of the most famous being Game 5 of the 1997 Finals. Known as the “Flu Game,” Jordan scored 38 points in 44 minutes to put the Bulls up 3-2 in the series, despite suffering from flu-like symptoms. Noticeably weak and tired, Jordan was barely able to hold up his head on the bench and was carried off the court after the game by Pippen.

But contrary to popular belief, it wasn’t really the flu. Jordan confirmed it was actually food poisoning.

In the documentary, Jordan’s trainer, Tim Grover, was asked about the night before Game 5. He remembers Jordan being hungry, so they ordered a pizza from the one place that was open in the area near their hotel. According to Grover, five people showed up to deliver Jordan’s pizza. Grover remembers feeling apprehensive, telling filmmakers he “had a bad feeling” about the pizza. No one other than Jordan wanted to eat the pizza, so Jordan finished it himself. Hours later, Jordan woke up in the middle of the night throwing up. He was sick the entire day and was still weak by tipoff. Therefore, the “Flu Game” should technically be known as the “Food Poisoning Game,” but it probably won’t. “100 percent it was food poisoning,” says Grover, “But obviously it just sounds better to be the ‘Flu Game’ than the ‘Food Poisoning Game.’”

Before the season ever started, the 1997-98 season was seemingly going to be the last of the Jordan-era Bulls. But, after winning their sixth championship, Jordan never fully understood why the team broke up. In the final minutes of Episode 10, Jordan was handed a tablet with a recording of Owner Jerry Reinsdorf’s explanation for dismantling the team. “I can’t wait to hear this,” Jordan says. “We’ve never had any dialogue why.” All these years later, the centerpiece of the dynasty was still in the dark on why it ended.

Reinsdorf reasoned it would have been “suicidal” to bring back all of Jordan, Pippen, Kerr, Rodman and Jackson, both logistically and financially. All four players were nearing the end of their careers, and Jackson would not agree to be the coach of a rebuilding team. Jordan scoffed at Reinsdorf, suggesting all would have agreed to one-year deals for a chance to win a seventh title.

“It was maddening,” admitted Jordan. He left while still at the top of his game. He had just won his fifth MVP and his sixth ring. He remains the only NBA player to retire after winning an MVP. “I felt like we could’ve won seven. I really believe that. We may not have. But man, just to not be able to try… I can’t accept it.” Those are some of the last words we hear Jordan speak in the documentary. All these years later, he is still incensed they were forced out before they felt it was time. And the fact there was no conversation between the owner and his franchise player is staggering. Jordan was the architect of his own career; he dictated every chapter of his story. Yet, he did not get to end it on his own terms.

With “The Last Dance” complete, another hole opens in the sports world. A select few leagues have returned but none that could reasonably fill the entire void. Jordan served as the one piece of entertainment that we could all experience. Over the course of five weeks, the world re-lived, reminisced and acquainted themselves with Michael Jordan’s career and personality. “The Last Dance” is another triumph for Jordan, one that will certainly inspire the creation of more sports documentaries. After the success of “The Last Dance,” there are reports of documentaries on the Redeem Team, the Houston Astros cheating scandal and the late Kobe Bryant. Although we may never see another athlete like Jordan, we can hope to see another documentary like “The Last Dance.”