‘White Christmas’ is Merry, Bright and a Little Too White 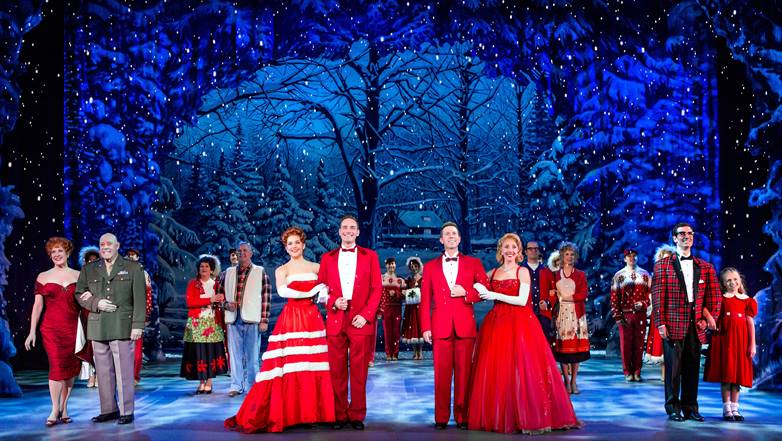 A classic example of a show that puts an emphasis on music above the script and modernity is Irving Berlin’s “White Christmas.” Based on the music and lyrics of Berlin, the national tour of “White Christmas” played at Fox Theater from Nov. 27 to Dec. 2. The musical numbers were entertaining, but the music was prioritized to the detriment of the plot.

“White Christmas,” based on the 1954 film of the same name, tells the story of two soldiers-turned-performers and Judy and Betty Haynes, who are also performers in a sister act. In the story, all four end up going to Pine Tree, Vt., hoping for snow. However, when they arrive at the Columbia Inn, a ski lodge, they realize that it will be a rather warm winter without snow, thus pushing the inn out of business. The innkeeper turns out to be the soldiers’ former commanding officer, and the four performers decide to stay to help him by calling up some chorus members and staging a show in the inn’s barn. While not all of the songs featured in this show are known as well as “Puttin’ on the Ritz” and “White Christmas,” there are a number of recognizable pieces, especially for those familiar with the film on which the musical is based, including “Blue Skies” and “The Best Things Happen While You’re Dancing.”

The choreography, devised by director and choreographer Randy Skinner, was stylistically consistent, but it lacked much of Bob Fosse’s signature style from the original film. Of course, some dancers and choreographers may argue that this is an improvement: Fosse’s style was very bizzare and at times aggressive, which perhaps didn’t fit well with this Berlin classic in the first place.

The four lead roles: Betty Haynes (Kerry Conte), Judy Haynes (Kelly Sheehan), Bob Wallace (Sean Montgomery) and Phil Davis (Jeremy Benton) were rock-solid. Their voices and acting complemented each other, and the two couples (Betty and Bob, Judy and Phil) had obvious chemistry. Conte and Montgomery’s characters are both standoffish at first, and the connection between the actors made their rocky relationship the real star of the show. Sheehan and Benton’s characters do not have a rough patch in their relationship, which feels authentic as their playful demeanors and quick humor make them seem like a perfect pair.

Vocally, all four actors blended well together, and each was compelling on their own as well. Conte especially shined as Betty Haynes. Her character is generally reserved, but when she expresses what she’s feeling, it is gorgeous. Her range is huge, with tenor notes just as strong as her high soprano ones. Conte’s rendition of “Love, You Didn’t Do Right By Me” was arguably even more impressive vocally than the original Peggy Lee version. In this piece, she emotionally sings about her sorrow when she left Bob because she learned (mistakenly) that he was going to try and buy out the inn. Her dynamics and choice of line shaping, as well as her technical ability, made this a beautiful moment.

The plotline itself is not high-stakes by any means, and it seems the scenes only exist to string Berlin’s songs together. Some changes to this version of the story would have brought the story more smoothly to 21st century audiences. But this script is for passive entertainment and nostalgia, and on those fronts alone it succeeds, sacrificing humor and casting that may be more appropriate in this day and age.

As in the original, the musical is a white Christmas in more ways than one, as the cast consists of only one or two people of color. Some of the jokes and characters borrowed from the original movie for comic relief felt cheap and inappropriate by today’s standards. For example, two oversexualized chorus girls act confused when someone mentions World War II (which in the ‘50s was very recent). At another point, Wallace jokes to Davis at the beginning of the show that “as long as it wears a skirt … you trot it out.” For a story as old as “White Christmas,” it’s disappointing that these jokes and practices have not died out over the years.

On a more basic level, the mechanics of the show itself ran very smoothly. The scene changes were nearly imperceptible behind the constant action, and the sets and costumes were gorgeous: the ‘50s vibe of the club that the Haynes sisters perform in and the Ed Sullivan show delivered a distinct nostalgia for the original film. While there were some minor blips in light and sound, such as a spot that was turned on too early and a mic turned down too early after a long number, the performance ran like clockwork for the most part.

Overall, not much has changed from the original in the U.S. Tour of Berlin’s “White Christmas” at the Fox Theater. Not everything in the show has aged well. While the actors who were cast are all brilliant and compelling, it is disappointing that they didn’t tap into a more diverse group of talent for this tour.