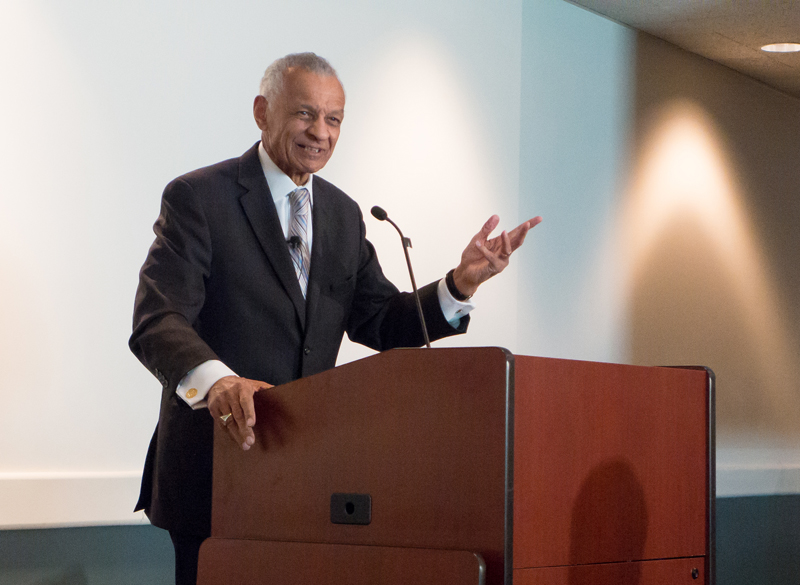 Emory honored Martin Luther King, Jr. this week with various events and presentations commemorating his life’s work.
The celebrations included Emory’s Day On, a University-wide day of service; a performance by the Spelman College Glee Club; a speech by activist Reverend C.T. Vivian; a social justice dialogue titled “Race, Sex and MLK;” and a conversation on creativity and social justice titled “Documenting the Undocumented.”

Emory kicked off the week with Emory’s Day On, one of Volunteer Emory’s large-scale service events that takes place every Martin Luther King, Jr. Day, according to Volunteer Emory Co-Director and College senior Daniel Kuzmanovich.

This year’s event had more than 400 members who volunteered on 19 service projects in the Atlanta area.

“The Martin Luther King, Jr. holiday is a welcome chance to take the day off throughout the nation, but for the Emory community it is a chance to have a day on,” Kuzmanovich said.

Following Emory’s Day On was a talk with Vivian, a civil rights activist and recipient of the Presidential Medal of Freedom. The event took place in the Winship Ballroom in the Dobbs University Center on Tuesday.

“Dr. Vivian was chosen because of his historical and ongoing work for the cause of civil rights, equality and social justice,” Sanders said.

He added that he thought Vivian was “informative and inspiring.”

The conversation continued Thursday with an exhibition titled “Documenting the Undocumented” which highlighted creativity’s place within social justice.

The presentation began with a focus on the Freedom University Photography Project, which highlights the social realities of undocumented youth banned from higher education in Georgia, according to Laura Soltis, an administrator in the Department of Visual Arts.

“They hope that citizens of this country will recognize the ways that separate and unequal access to higher education contravenes our most cherished principles of equality and justice for all,” Soltis wrote in the Project Statement about the intentions behind the Freedom University Photography Project.

This event, also organized by Volunteer Emory, was an extension of the dialogue on Emory’s Day On, according to College senior and Volunteer Emory Social Justice Chair Khatdija Meghjani. The dialogue included a reading of King’s “I Have a Dream” speech by Meghjani, an interactive activity by Carlton Mackey, assistant director of the D. Abbott Turner Program in Ethics and Servant Leadership and director of the Ethics and the Arts Program for the Center for Ethics, regarding his recent work titled “50 Shades of Black,” and a musical performance by College senior Davion Ziere.

“My hope for this event is to engage our community in a dialogue that needs to be had and to have everyone leave thinking about the role we all play in perpetuating inequality in America,” Meghjani said.