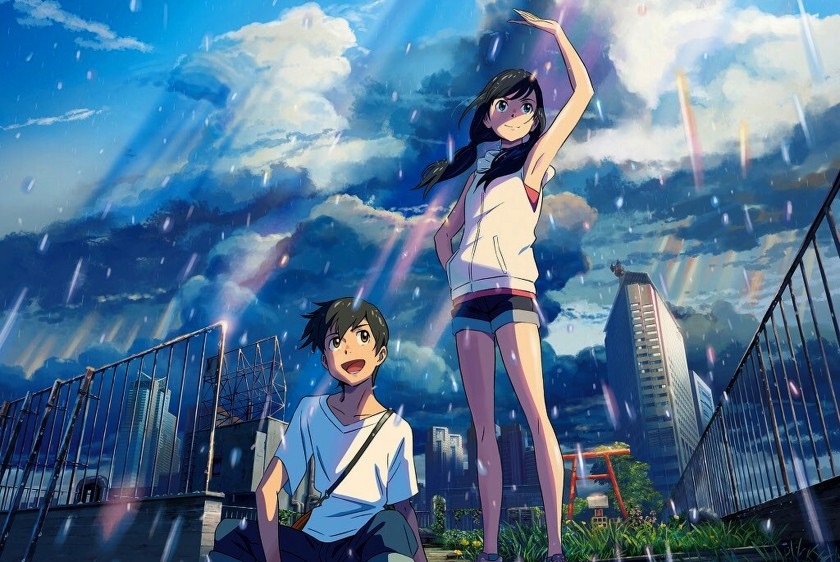 Following the massive success of his 2016 anime film “Your Name,” director Makoto Shinkai brought his newest animated film, “Weathering with You,” to Japan’s big screen, and, as of Jan. 15, it has finally graced U.S. theaters. The new project is as bright and crisp as ever for Shinkai’s standards, and the story is an altogether heartfelt and energetic adventure. But while the film is overall solid on a technical and narrative level, it doesn’t quite reach the emotional highs of its predecessor.

The film finds a 16-year-old runaway, Hodaka (Kotaro Daigo), wandering the streets of Tokyo, looking for a job and a place to stay. After finding shelter working for a paranormal tabloid magazine, he is sent on a search for a “sunshine girl” who can pray to bring an end to the relentless rain blanketing the Tokyo skyline. Hodaka’s quest leads him to Hina (Nana Mori), the supposed sunshine girl, and her younger brother Nagi (Sakura Kiryu). Together the three start a business to bring good weather to those who need it. But as the police try to bring Hodaka home and we witness the consequences of Hina’s powers, it seems they can’t make the sunshine stay forever.

“Weathering with You” is an excellent showcase of Shinkai’s sharp and pristine animation style. Though the film’s rainy background may have been a challenge in terms of technical animation, Shinkai and his team were more than happy to meet it. Each drop that skips off a puddle or slides down an umbrella receives almost as much attention as any other aspect of the film. The artwork for the film’s backdrop feels particularly striking, with landscapes that capture Tokyo’s vibe while adding a unique touch that constructs Shinkai’s social and spiritual vision of this world. The film pays close attention to the details of the characters’ homes that help build their personalities without wasting time with dialogue. While a feast for the eyes, the animation and character movement itself hardly adds any depth to the movie; it’s gorgeous and energetic but it feels as though there is some untapped potential in terms of emotional expression.

Japanese rock band Radwimps’ score for the film was surprisingly notable especially when compared to their previous work with Shinkai. The band’s pop-rock songs from “Your Name,” suited the central teenage love story of that film, but it seems they took a different approach to “Weathering with You.” Radwimps’ instrumental and electronic compositions for more ambient scenes in “Weathering with You” display a diversity of style that creates a distinctive sonic backdrop to the story. There are a few vocal tracks featured in the film to highlight some of the emotional high points toward the bookends of the film, and while they capture the youthful spirit of the film, they do not feel as well-meshed with the central tones of chaos that the plot explores.

While it feels unfair to hold this film in comparison to the anime titan that was “Your Name,” it’s hard to ignore the legacy Shinkai’s previous film left. The director himself does little to make this film feel distinct from his previous. They’re both supernatural love stories centered on misunderstood teens. While “Weathering with You” does manage to explore some of its own themes such as seeking a family or accepting the chaos of our world, tonally the plot shares many beats with its predecessor. The protagonists of “Your Name” even make less-than-subtle cameos at different points in the film. The reason Shinkai’s new film might not feel as striking may simply be the format of the films; while “Weathering with You” takes on a more traditional action-adventure structure that feels scattered, “Your Name” focuses on gaining a better understanding of the protagonists’ lives, their backgrounds and their homes. Shinkai’s newest work still brings to life a charming, youthful adventure but doesn’t quite feel as profound and nuanced as his works have been before.