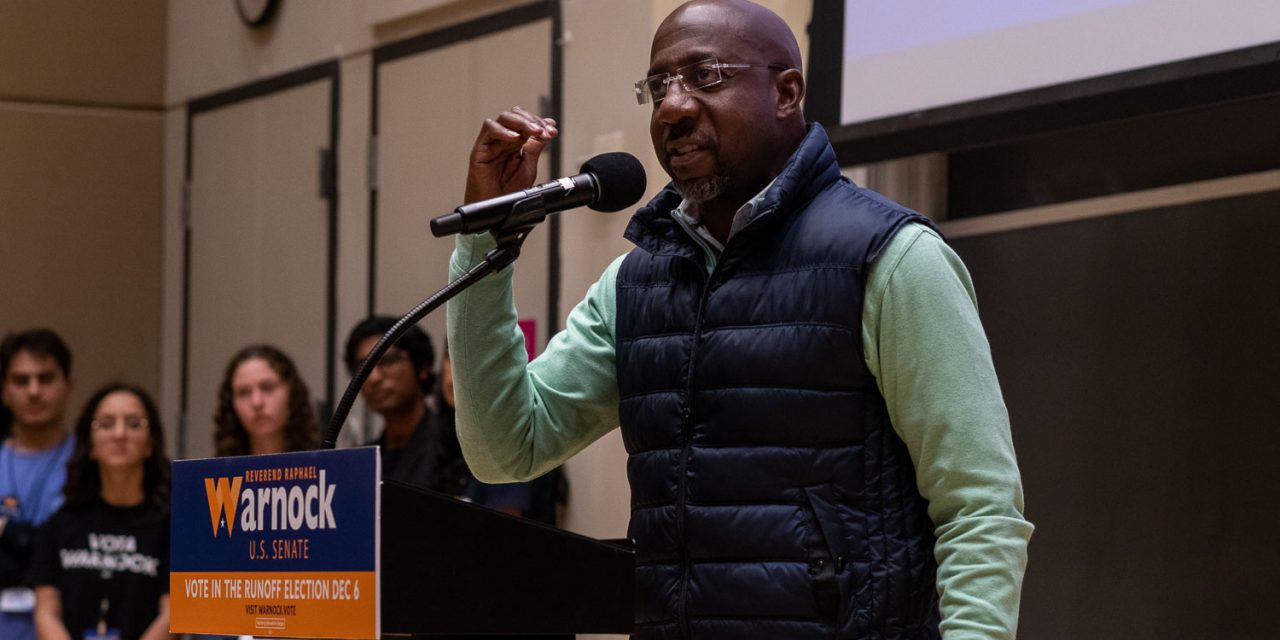 When Sen. Rev. Raphael Warnock (D-Ga.) addressed a crowd of about 120 members of the Emory University community on Nov. 19, he spoke not only as a senator up for reelection, but also as a proponent of Martin Luther King Jr.’s leadership. Ultimately, Warnock said, he was still the second youngest of 12 kids who grew up in public housing and chose to attend Morehouse College (Ga.) because it was King’s alma mater. He said he admired King for using his faith “not as a weapon, but as a bridge” and inspiring people to put everything on the line to fight for civil rights. 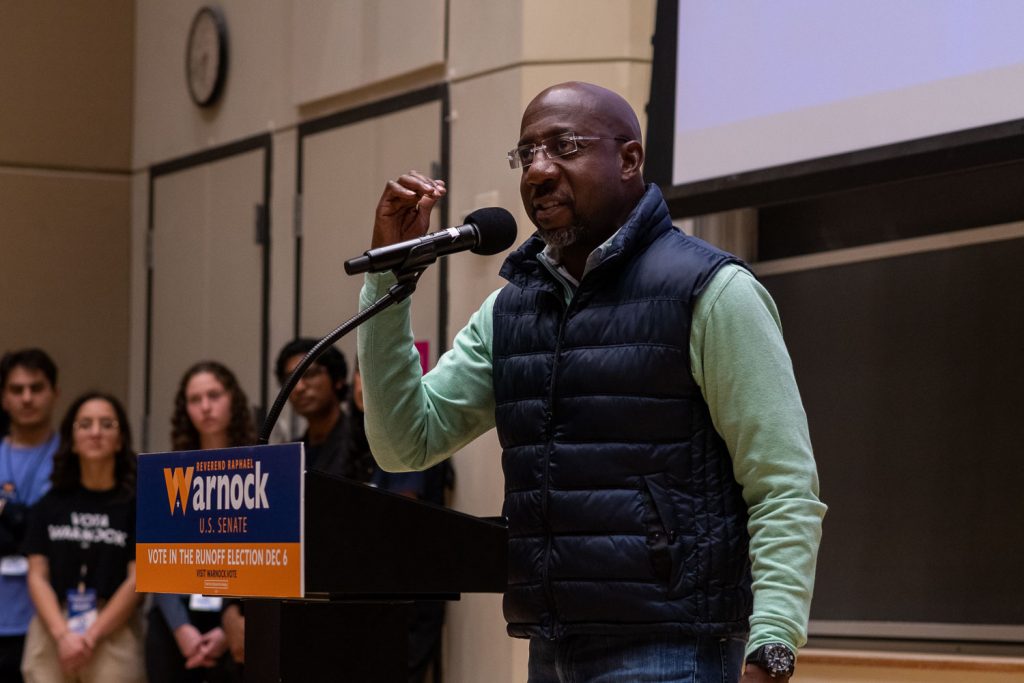 Sen. Rev. Raphael Warnock (D-Ga.) encourages students to vote during a speech in the Mathematics and Science Center on Nov. 19. (Natalie Sandlow/Staff Photographer)

These experiences were also with him, Warnock said, when he was on the ballot for Georgia Senator over 20 years later. He beat his opponent, Kelly Loeffler (R-Ga.), in a runoff on Jan. 5, 2021 to flip the Senate blue alongside Sen. Jon Ossoff (D-Ga.). Warnock said he didn’t take the opportunity for granted — when he was elected, he thought about the struggles he overcame as a kid that some Georgians are still facing today.

“When I looked up and saw that a kid who grew up in public housing was sitting in the Oval Office looking the President of the United States in the eye, I wasn’t busy congratulating myself for being there,” Warnock said. “I thought about the fact that when I went to Morehouse, I didn’t have enough money for the first semester.”

Anish Nashine (24B) said that it is rare for a senator to connect with younger students like Warnock did during his speech.

Now, Warnock is entering a Dec. 6 runoff election, in pursuit of a second term against NFL star Herschel Walker, after neither candidate received 50% of the votes in the tight Nov. 8 primary election. Warnock ended with a slight lead of 0.09 percentage points.

“Last week, I finished first, but going into a runoff is like starting all over again,” Warnock told the Wheel. “So, we need the people who showed up to show up again, and I win.”

“I just would really call on people to vote and show the world again that Georgia can turn blue, and it can turn blue largely because of Emory students,” Kishore said.

Warnock addressed the differences between his and Walker’s beliefs during his speech, later telling the Wheel that he is “the only serious candidate in this race.”

He pointed out that while he supports access to reproductive healthcare and abortion, particularly in the wake of Roe v. Wade’s downfall, Walker is strongly against abortion. Warnock said this is a “rather curious” position for Walker to take, making a jab at allegations that Walker paid for his ex-girlfriends’ abortions, earning laughs from the crowd.

May Zhou (23B) reflected on this moment after the event, saying it was refreshing to see that Warnock  was unafraid to “touch on those topics that may be considered controversial.”

Additionally, Sultan Minhas (22C) said he believes Warnock received the “largest cheers” when discussing abortion because “that’s an issue that really invigorates a lot of us young folks.”

Warnock also discussed his commitment to making college more affordable, citing the Pell Grant Preservation and Expansion Act of 2021 that he co-sponsored. The Act aimed to increase the amount of money given in Pell Grants — federal scholarships awarded to undergraduate students with exceptional financial need — and fought for student debt relief. Warnock also told the Wheel that he has secured a total of $6 billion for historically Black colleges and universities during his tenure. 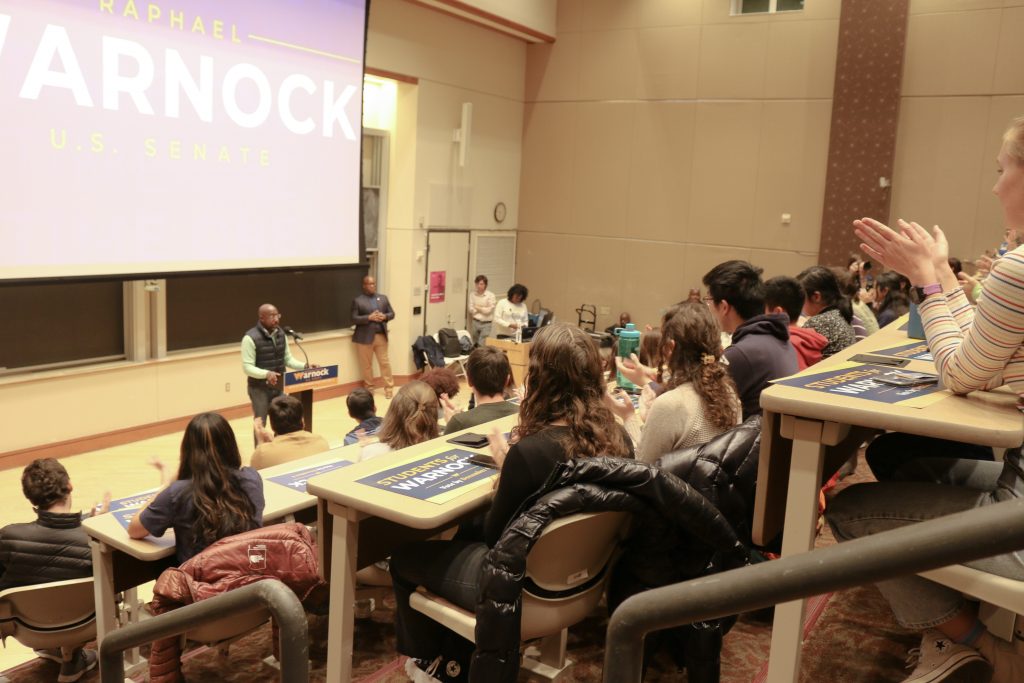 The incumbent senator also discussed two bills he introduced, one to cap the cost of insulin at $35 for people on Medicare and another to place limits on the cost of prescription drugs for seniors.

Raeyan Syed (24C) said that out of Warnock’s speech, his commitment to lowering insulin prices resonated with her the most.

“That was something that hits close to home because my family members have diabetes,” Syed said. “I know they’ve really thought a lot about how that price has been increasing, so it was nice to hear that change is being made.”

After the event, Young Democrats of Emory President Ash Shankar (23B) told the Wheel that Warnock’s speech seemed to resonate with the crowd, as he tapped into causes that are important to college students.

“Senator Warnock killed it,” Shankar said. “He spoke to the students very directly about why this election matters and the stakes that are up for grabs at this point with the Senate seat.”

Warnock emphasized the importance of college-aged voters, saying that he will not be able to continue fighting for change if younger Georgians do not make it to the polls on Dec. 6. He encouraged students frustrated with the current political climate not to grow impatient and fall into a trap of “nihilism and passivity.” Rather, students’ impatience should fuel their commitment to keep fighting for change, even when it feels like they’re moving backwards, Warnock said.

“Democracy expands and then it contracts … and it’s frustrating, but any mother will tell you that contractions are necessary for new birth,” Warnock said. “Out of this tense and difficult moment, it is your turn to make a difference. You are the latest generation of Americans who get to decide that we are indeed going to move closer towards our ideals.”

Natasha Rasnick (25C) echoed these sentiments, describing the right to vote as “constitutional.”

“It is your chance to get people to listen and to change the future,” Rasnick said. “If you’re not voting, then you’re not using your voice, and especially this election, there are some issues that could really define the future.”

Young voters played a vital role in electing Warnock and Ossoff in 2021. Warnock emphasized the historical importance of the election, as he and Ossoff were the first Black man and Jewish man to represent Georgia in the U.S. Senate, respectively.

“Georgia, a state in the old Confederacy and the cradle of the Civil Rights movement, in a moment when folks at the highest levels of our government were trying to divide us and stir up the old demons of bigotry and antisemitism and racism, while they were doing that, Georgia was standing up and sending us to the Senate,” Warnock said.

Warnock noted the irony that the Jan. 6 U.S. Capitol insurrection fell the day after he and Ossoff were elected. He called the event a “violent assault,” alleging that it was based on “the big lie” that the 2020 presidential election was stolen from former U.S. President Donald Trump.

“This idea that the election was stolen, you know what they’re really saying?” Warnock said. “They’re saying that this multiracial, diverse, emerging American electorate does not get to decide the future of the country.”

The current runoff leaves the United States hanging in the balance between the promise of Jan. 5 and violence of Jan. 6, Warnock added.

“We’re somewhere between our hopes and our fears, those who want to divide us and those who want to push us closer towards our ideals,” Warnock said. “I choose Jan. 5. I choose a day when a kid who grew up in public housing can serve in the United States Senate next to a Jewish young man.”

Before Warnock could finish his sentence, his voice was drowned out by the audience’s applause. 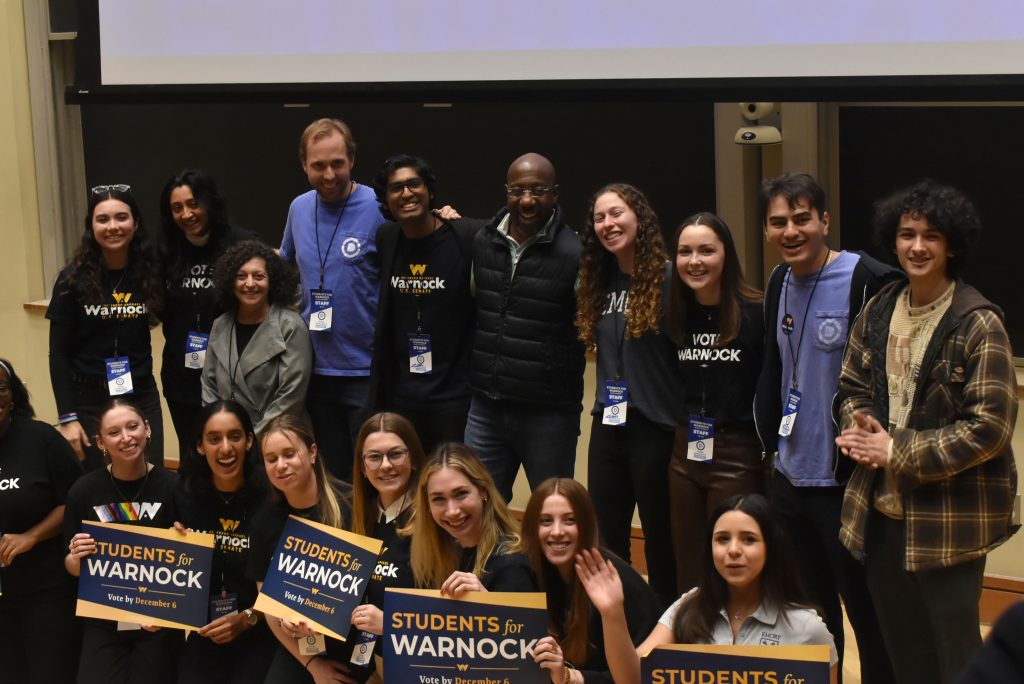 Warnock ended his speech by reflecting on the historic April 7 confirmation of Ketanji Brown Jackson, who is the first Black woman to serve in the U.S. Supreme Court. He said that during the event, U.S. Vice President Kamala Harris told him to mark the occasion by writing a letter to “somebody who comes to mind.”

It didn’t take him long to decide on writing to his then-five-year-old daughter Chloé. Warnock recounted the letter to the crowd.

“Dear Chloé, today we confirmed to the United States Supreme Court Ketanji Brown Jackson,” Warnock said. “In the long history of our nation, she is the first Supreme Court Justice who looks like you, with hair like yours.”

Warnock continued, remembering that he told his daughter that Harris is also the first U.S. vice president who looks like her.

“I write this letter to say that, in America, you can be and you can achieve anything you set your head and your heart to do,” Warnock recounted.

However, Warnock said he was not only thinking of Chloé as he wrote the letter — he was thinking about “all our daughters” and “all our sons,” saying that the United States can only reach its full potential if every child can “live up to their promise” without being limited by race, gender, sexual orientation or class. Warnock encouraged students to keep this in mind as they vote in the runoff election.

“Over the next two and a half weeks, I want you to recognize that you’re doing more than putting a check next to a name in a ballot box,” Warnock said. “What you do in this moment is a letter to the future.” 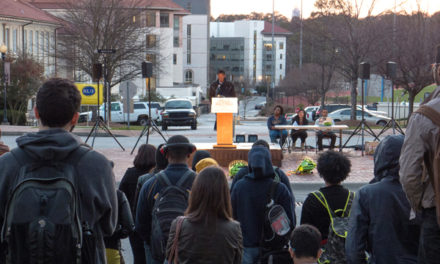 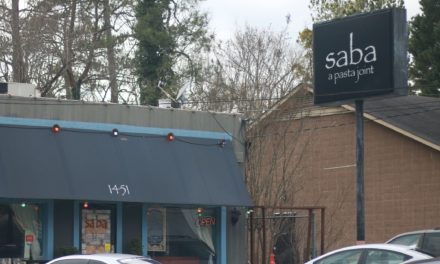 Saba to Relocate to Downtown Decatur