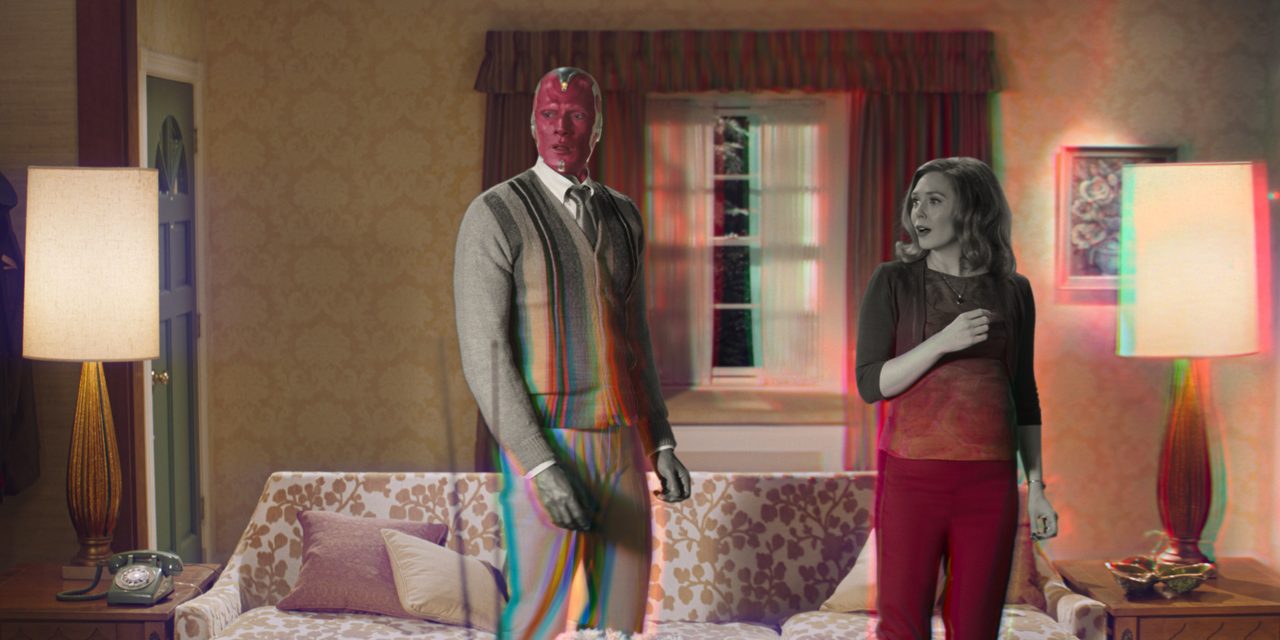 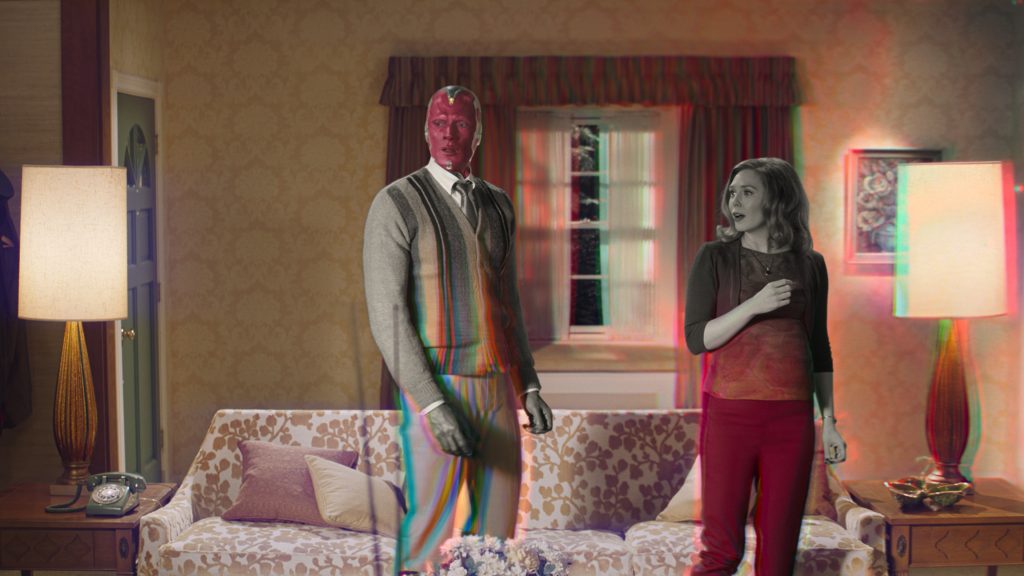 This article contains spoilers for “WandaVision” season one.

When the first two episodes of “WandaVision” premiered on Disney+ in mid-January, I was skeptical about whether Marvel Studios President Kevin Feige could lure viewers into the Marvel Cinematic Universe’s (MCU) first television series based on its slow, sitcom-based beginning. Boy, was I wrong. Those two episodes propelled “WandaVision” into the cultural stratosphere, with memes, TikToks and hundreds of articles dissecting and theorizing about each frame of each episode. The series’ agonizing weekly release schedule only amped up chat boards, as foreshadowing led fans down rabbit holes: Is the villain Mephisto really pulling the strings? Who is the aerospace engineer that Monica Rambeau (Teyonah Parris) referenced? Is an X-Men crossover incoming? As it turns out, most of these theories are moot, and the show’s actual greatness spurs from the relationship between its titular duo, Wanda Maximoff (Elizabeth Olsen) and Vision (Paul Bettany). Despite its CGI effects and larger-than-life characters, “WandaVision” works best as an intimate love story between two deeply troubled heroes while simultaneously paying homage to beloved sitcoms through the decades.

The plot of “WandaVision” is complex and hard to summarize: the show starts off mimicking a traditional sitcom beat-for-beat, but by the end of episode three, it takes a hard 180-degree turn toward more typical Marvel-dom. The main plot revolves around Wanda, who — after watching her lover die at the hands of Thanos in “Avengers: Infinity War” — creates the world of Westview, where Vision is revived and everyone in town acts like they’re playing roles in a cheesy sitcom. However, this status quo is soon interrupted when the government agency S.W.O.R.D., led by the nefarious Tyler Hayward (Josh Stamberg), tries to intervene and stop Wanda from brainwashing the civilians of the Westview “Hex.” Meanwhile, Wanda’s nosy neighbor Agatha Harkness (Kathryn Hahn) has ulterior motives for stopping Wanda, which may or may not involve her “brother,” Pietro Maximoff (Evan Peters). Sprinkle in some comedic relief from beloved FBI agent Jimmy Woo (Randall Park) and astrophysicist Darcy Lewis (Kat Dennings) as well as a superpowered turn from Monica, and you have a sprawling nine episodes of television.

Considering how many characters and subplots “WandaVision” juggles, it’s impressive that director Matt Shakman does any of them justice in six hours (especially considering that the plot barely progresses through the first three episodes). Shakman succeeds most in developing his two primary protagonists and their relationship. In previous MCU films such as “Captain America: Civil War” (2016) and “Avengers: Infinity War” (2018), Wanda and Vision were relegated to subplots and treated as afterthoughts. “WandaVision” finally allows both characters to come into their own, and we learn both about their relationship and their tragic past. Their chemistry constantly sizzles on-screen, and Olsen and Bettany give two of the MCU’s best performances. Olsen impeccably captures Wanda’s grief and desperation as she traps an entire town in order to resurrect her lost lover. Likewise, Bettany’s performance is subtle yet powerful as he gradually uncovers the truth about his false reality. Whether or not we get more from Vision’s character in the MCU, the show manages to wrap up his character arc in a touching way. Meanwhile, the finale’s post-credits scene confirmed that audiences will be seeing a lot more from Wanda, potentially later this year in “Spider-Man: No Way Home.”

While the show features compelling character arcs for Wanda and Vision, some of the other characters don’t receive such treatment, particularly those outside of the Hex. Jimmy and Darcy may be responsible for some of the show’s best memes, but they’re criminally underserved as characters and receive little development. This is evident in the finale, where their entire subplot was reportedly cut (although outlets are unsure whether it was cut for time or as COVID-19 collateral). These underdeveloped characters are likely a product of the show’s half-hour runtime: “WandaVision” is considerably shorter than most other prestige television shows, which makes the show leaner but unfortunately shallower as well.

Another victim of the show’s brevity is one of its primary villains, Agatha. Don’t worry, I’m not hating on the earworm “Agatha All Along,” which somehow managed to sneak onto the iTunes charts. However, because the show does not introduce Agatha as a villain until the end of episode seven, her character feels undercooked. Even the show’s attempt at developing her character by connecting her to the Salem Witch Trials lacks much intrigue. Not to mention, her character’s evil schemes ruin the show’s most surprising scene: the introduction of Peters’ Pietro (or, as Agatha refers to him, “Fietro”) into the MCU. Bringing in an X-Man from another universe would have been a brilliant way to open up the multiverse, but instead, Pietro merely ends up at the butt end of a boner joke in the finale.

What “WandaVision” lacks in character development, is made up for in its production value and homages to classic television. Cinematographer Jess Hall remarkably captures the aesthetic of each era of television that the show portrays, from “The Dick van Dyke Show” to “Modern Family.” The reveal in episode seven that Wanda was a big fan of sitcoms when she was young serves as a fitting explanation for this element of the show as well. While the styles become looser as the series progresses, the concept of moving forward a decade in each episode keeps the audience on their toes and brings a creative flair to the series that some Marvel products (cough, cough, Captain Marvel) lack.

At the end of the day, your opinions on “WandaVision” are likely based on your expectations for the series. If you expected a touching, layered love story between two heroes, you’ll be satisfied. On the other hand, if you were hoping for a series that flawlessly intertwines with the MCU, you may be disappointed. After all, the series subverts or disregards many fan theories in order to tell a more intimate, condensed tale. I suspect that the show will hold up well for future viewers, as it can be fully appreciated in one sitting instead of spending weeks in between episodes theorizing over top-secret cameos that will never happen. So, while “WandaVision” is a bumpy ride, it’s one that’s worth taking. Next time, I’ll be sure never to bet against Marvel.