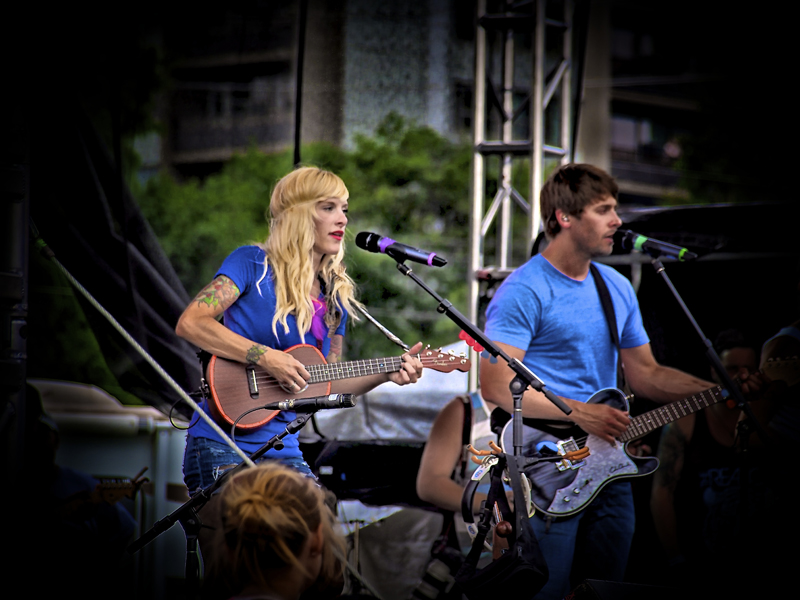 Before your time comes to walk off the earth, you absolutely have to listen to the folk-pop, experimental band Walk Off The Earth.  The band’s organic and extraordinary videos are incredibly unique, containing both high production value and an undeniable homemade feel. They have music for both hard rockers and sensitive souls, and not only does the band create its own songs, it also covers a number of well-known artists. So whether you recently participated in Greek life initiation or not, every one of you is now a participant in Walk Off The Earth initiation.

Formed in Canada in 2006, Walk Off The Earth is a powerful force of creativity unlike any other, breaking barriers with its distinctive and idiosyncratic style. This five-member multitalented band blends an intricate, harmonious mix of vibrant vocals, captivating keys and passionate percussion. They play guitar too – all five of them playing one guitar at the same time, in fact – such as in their cover of Gotye’s “Somebody That I Used to Know.”

Currently, the video has more than 156 million views on YouTube. But if you’ve already seen it, you should know it’s only a pre-requisite course to bigger and better things. However, if you’re not already one of the millions of viewers, don’t worry. It’s not too late to enter the world of Walk Off The Earth!

The band is currently on tour and will play Atlanta at the Buckhead Theatre on Feb. 5. To prepare, get your adrenaline rushing and heart pumping by watching “Red Hands,” a video with a puzzle effect and filmed out of sequence in one continuous shot.

For LMFAO fans, watch “Party Rock Anthem” and rock on to your heart’s desire as you immerse yourself in this intense rock-and-roll version of the song.

Maybe you’re loving Lorde right now. If so, the incredibly well-synchronized of “Royals,” with a continuous stream of different instruments, is especially for you.

Beat to the rhythms of B.o.B with marvelous beatboxing “Magic.”

Feb. 9 marks the 50th anniversary of the Beatles’ first American television appearance on “The Ed Sullivan Show,” so pay your tributes with the relaxed and joyful “From Me To You.”

Finally, join Walk Off The Earth in their escape from the Sheriff and his deputy in “Gang of Rhythm.”

Congratulations, you are now forever exposed to this powerful force of creativity where musical innovation will remain with you for the rest of your life. Welcome to the Gang of Rhythm, a group where, as Walk Off The Earth beautifully sings, “There’s no worries on the earth tonight, we’re all walkin’ off the world tonight.”

Benazir Wehelie: Your album R.E.V.O. is an acronym for Walk Off The Earth’s motto, “Realize Every Victory Outright.” What’s the meaning behind this motto?

Ryan Marshall: Basically it’s saying to go all the way with whatever it is you are doing. Don’t half-a– it, don’t wait for someone else to do it for you. Give it all you got and then some.

BW: You’ve utilized social media incredibly well. Why is it so important for you to be actively involved on social media?

RM: We have always been connected with our fans. We like hearing their comments, and we want them to feel like they are part of our WOTE family because we consider them part of ours.

BW: On the band’s Twitter, it says, “Making music is like a puzzle … we like puzzles!” Do you do puzzles while on tour and what do you do to entertain yourselves through your long hours of traveling?

RM: No actual puzzles have been put together on tour.

We usually write songs or sleep. Sleep is probably the most exciting past time on tour!

BW: You’ve covered many artists and made innovative music videos, such as Gotye’s “Somebody That I Used To Know” and Lorde’s “Royals.” What is the creative process and inspiration behind the videos?

RM: Typically one member will bring an idea to the band and then everyone adds some ideas to it and we just make it up as we go. We try not to over think a video and just let it go where it wants to go.

BW: Which artists that you have not covered already would you like to cover?

RM: It’s not really about the artist. It’s more about the song. We love covering songs that inspire us and that allow us to give them the WOTE twist, and give it a new sound and a new feel.

BW: What is the major difference between performing for a live audience in comparison to creating music videos?

RM: You get as many takes as you need when you record a video. Live is one shot and it needs to be your best.

BW: How has being a multi-instrumental band impacted your music, and are there any other instruments you would like to learn how to play and incorporate into your music?

RM: None of us are necessarily professionals at one instrument, but we can all play a tune or write a song on pretty much any instrument you put in front of us.

We love creating new sounds, and sometimes, we don’t even play the instrument properly, but we are able to get what we want out of it for a new original and organic sound.

BW: You will be performing in Atlanta on Feb. 5. What can audiences look forward to most about hearing you perform live?

RM: One hell of a rock show.