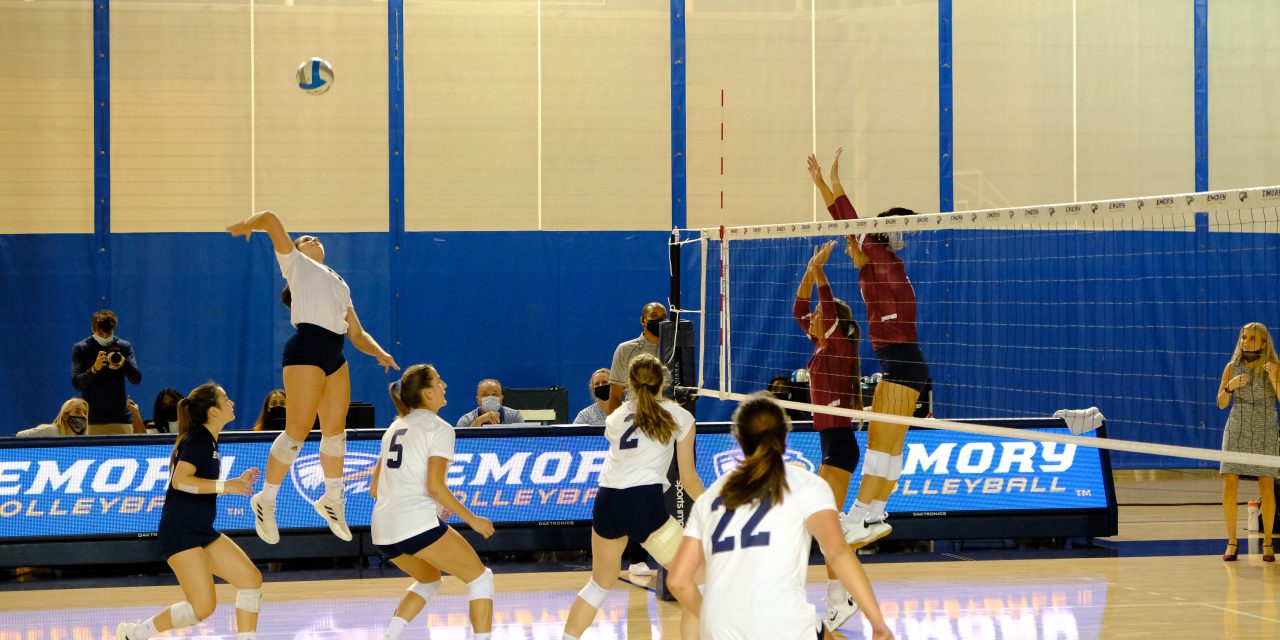 The No. 7 Emory University volleyball team competed in the University Athletic Association (UAA) Round Robin #2 tournament, hosted by Brandeis University (Mass.), on Oct. 3. The Eagles won their first match against Washington University in St. Louis (Mo.) (WashU) but fell to New York University (NYU) in their second, marking their first loss of the season.

The UAA volleyball schedule is structured differently than prior to the pandemic. Instead of constant travel for away conference games, the UAA is hosting weekend tournaments at one location.

Coming in with a six-game win streak, the Eagles first played the WashU Bears and came out with a victory in straight sets (25-14, 25-17, 27-21). Senior outside hitter Tara Martin, freshman middle hitter Madison Cail and sophomore outside hitter Carly Wallace were the stars of the match. Martin had nine kills, Cail had four blocks and Wallace had 11 digs. While the Eagles built a comfortable 2-0 lead entering the third set, they found themselves down 7-1 early on. However, Martin led the comeback with three kills to put the team on an 11-4 run, and Wallace added two crucial kills late in the set to ultimately seal the win.

Wallace was excited about the victory over the Bears and securing a win in the first game of the tournament.

“We took care of business,” Wallace said. “It was nice winning in three sets because they are a respectable team.”

Later that afternoon, however, the Eagles’ seven-game winning streak came to an end with a loss to the NYU Violets in four sets (25-14, 13-25, 25-21, 25-23). Despite the loss, Martin, junior middle hitter Abby Heimlicher and left defensive specialist Deborah Hong had stellar performances. Martin had 14 kills, Heimlicher had three blocks and Hong had 14 digs.

While each team’s first set win was by more than 10 points, the final two set scores were much closer — the highest margin in those final sets was just four points. In the third set, NYU went on a 7-2 run after the Violets and Eagles were tied at 14, which was ultimately too big a deficit for the Eagles to overcome. With their backs against the wall entering the fourth set, the Eagles found themselves down early. After climbing back to make it 24-23, the Violets won the final point and clinched the match.

Despite the loss, Head Coach Jenny McDowell was proud of her team’s performance in the tournament.

“It was a great weekend for us,” McDowell said. “I am really excited [about] where our team is right now. We beat a very good WashU team and had a great battle with NYU. I love what we have accomplished so far and I am really excited about the growth we’ve shown. But we have so much to improve on. The next five weeks are going to be really special for our team.”

Similar sentiments to McDowell’s were felt among the players. After their tournament performance, Wallace is hopeful about the road ahead for her team.

“We’ve been getting better as a team and playing better each time we step onto the court,” Wallace said. “It’s encouraging going into practice this week knowing that we’re going to continue to get better to beat these teams in the future.”

As the team enters the thick of UAA competition, McDowell has looked towards her older players to set the example. For some players, these have been their first conference games, but even with last season off due to the pandemic, the team has been able to mesh well together and build chemistry.

As the team looks toward the end of the season, McDowell and the team have a lot of momentum to take advantage of, despite the recent loss.

“The home stretch shows you where you are right now and where you want to go,” McDowell said. “One of our goals is to win the conference in a few weeks. This team is full of relentless workers, and I truly believe this is going to pay off in the end.”

Coming out of the tournament, Emory is ranked No. 7 in the nation and has a 13-3 overall record along with a 4-1 conference record. The Eagles return to the court on Oct. 9 at Sewanee: The University of the South (Tenn.) at 5 p.m. 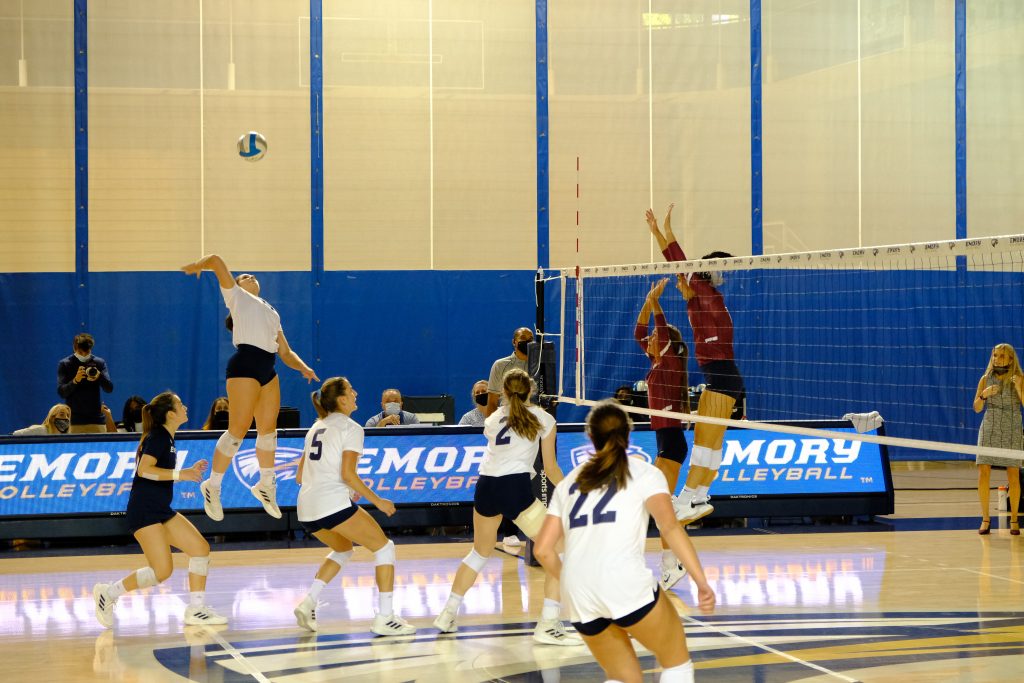 Emory volleyball goes for a kill in a Sept. 28 home match against Lee University (Tenn.). The Eagles picked up their first conference loss of the season this past weekend in a UAA Round Robin tournament. (Lin Yu/Contributing Photographer)