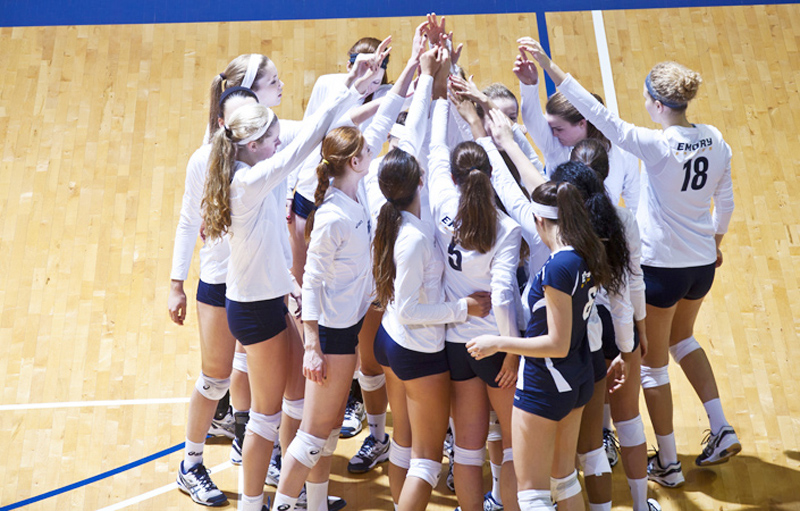 The volleyball team, ranked No. 6 nationally, returns to action this weekend, playing four matches Friday and Saturday (Nov. 1 and 2) at home at the Emory National Invitational. The Eagles will host SUNY Cortland (N.Y.), Berry College (Ga.), Juniata College (Pa.) and Trinity University (Conn.). The weekend promises to feature tough competition for the 24-3 Eagles.

Emory will try to get back on track during this tournament, following what Head Coach Jenny McDowell called a “very disappointing weekend” at the UAA Round Robin II, where the Eagles went 2-2.

McDowell remarked that the team’s disappointment during conference play would help the Eagles become a better team, by making the players “more focused and determined than ever.”

In addition to the volleyball matches, Friday evening will be a special night for senior Sarah Taub, a four-year veteran of the team.

As part of Senior Night, the Emory volleyball program will honor Taub for her outstanding contributions to the program.

The Eagles cannot afford to look past their competition at the invitational, as three of the squad’s four opponents have a winning record, including two opponents who are nationally ranked.

Emory begins play Friday evening against the 14-17 SUNY Cortland Red Dragons, who are 4-5 in their conference matches. The Red Dragons last played last weekend, finishing 1-2 in in SUNYAC Conference Play #3. This will be only the second time the Eagles have battled the Red Dragons, the first coming in 1998.

Later Friday night, the Eagles face the No. 9 Juniata Eagles who sit at an impressive record of 26-3 on the season. Juniata is coming off a successful weekend, winning the Wid Guisler Invitational, where Juniata defeated Johns Hopkins, DeSales University (Penn.) and Carnegie Mellon. Despite Juniata’s 9-7 record against Emory, the Emory volleyball squad has captured the last five matches between the two schools.

The Eagles continue play on Saturday afternoon against the 21-5 Berry Vikings, who are currently on a six-game win streak. This past Sunday, the Vikings defeated Birmingham-Southern College (Ala.) and captured their second straight Southern Athletic Association championship. The Eagles have never lost to the Vikings, holding a 8-0 record.

In its final match of the invitational, the Eagles face off with the No. 15 Trinity Tigers, who are 29-4 on the season.

Trinity comes to Emory on an eight game win streak, and the Tigers have won 19 of its last 20 matches. The two schools met earlier in the season, when the Eagles defeated the Tigers 3-1 at the Randolph-Macon Invitational. Emory holds a 12-10 all-time record against Trinity.

The invitational is the last of four for the Eagles.